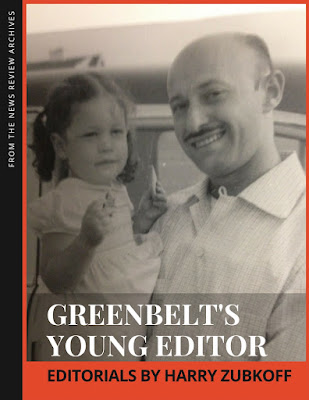 This is the second in a series of posts showing Harry’s editorials from the newspaper in Greenbelt, MD, in the 1950s. Greenbelt is a DC suburb founded in 1937 under FDR’s post-depression New Deal. The articles offer snapshots of Harry’s writings unknown to most family and friends he left behind, plus history lessons we can appreciate today.

Most of us think of December 7 as Pearl Harbor day, and truly none of us will ever forget that tragic day of history. Every year thousands of newspapers throughout the country editorialize on the occasion of this solemn anniversary, its meaning, its significance and its implications. It is a convincing reminder that we must never allow our defenses to so deteriorate as to become vulnerable to surprise attacks by a ruthless enemy. It is a warning and a symbol of the ghastly costs of unpreparedness. We have taken that lesson to heart. We are currently expending huge sums of money to build up our military strength, and the whole purpose of this buildup is to make it unmistakably clear to any potential enemy that it would be most unwise to attack us. The sheer horror of the damage that we can deliver with our atomic weapons should make anyone think twice before risking a war. And it is our hope that behind this shield of military might, our diplomats can work out with the diplomats of the world, a true and lasting peace – a world in which the threat of war can be completely abolished – a world without weapons – a world in which men and nations can settle their disputes in a meeting room instead of on a battlefield.

Today in millions of American homes the Christmas Seal with the red Double-Barred Cross is as much a part of the holiday scene as the Christmas tree or Santa Claus. It carries a message of hope and good cheer, that tuberculosis can be defeated if all of us work together. In the forty-six years since the first Christmas Seal sale, tuberculosis has been forced down from first to sixth place among the causes of death in this country. But despite this progress, tuberculosis today kills more than all other infectious diseases combined. It attacks 115,000 Americans every year.

Those who buy and use Christmas Seals are helping to protect themselves and their neighbors from this killer, which attacks without obvious symptoms. They are helping the voluntary tuberculosis associations acquaint more and more people with the basic facts about TB, with the need for chest x-rays in an effort to find TB early, when it is easiest to cure. They are supporting medical research in the development of better ways of treating and preventing tuberculosis.

This is part of the personal contribution millions of Americans are making during the Christmas season. By buying and using Christmas Seals they are helping to save lives and to reduce the suffering of their less fortunate neighbors. Dec. 7 is indeed a date to remember.

Most men are able to make the vital decisions in their lives without fanfare or publicity. The twenty-two young Americans who have elected to remain in Korea with their Communist captors have had the eyes of the world focused upon them while they were making up their minds. They had a chance to stand up and testify to freedom; instead they renounced their country.

It is hard to understand the thinking of these deluded Americans. They must have witnessed the treatment given their fellow prisoners who refused to fall for the Community line. They must realize the enormity of the lies they have been told.

The time may come when they will regret their decision. It is likely that when that time comes, however, it will be too late for them to salvage the liberty they have forfeited with apparent indifference.

Americans can sympathize with the parents and the loved ones of these men whose minds have been poisoned by the Communists. It is always tragic to look upon men who have turned their eyes away from the light and entered into the kind of darkness which can consume them.

“How far that little candle throws its beam”, says an old poem. It could be paraphrased, if unpoetically, to read, “How far the consequences of a strike extend”.

The New York newspaper strike, which deprived the world’s second largest city of its principal media of information and advertising for 11 days, is a perfect example. Moreover, it illustrated how unique a place the newspapers hold in a community.

The strike was brought by a photoengravers’ union which has 400-odd members employed on the major New York papers. Actually, only 207 votes were cast in favor of the strike, but it was a majority. The papers, of course, could have appeared without pictures but other unions honored the engravers’ picket lines and made publication impossible.

As a result, some 20,000 people were temporarily forced out of work, and a very large payroll was temporarily suspended. And a huge amount of holiday advertising business was lost.

This was only the beginning. To most stores, the newspaper is the dominant factor in advertising. It is the top medium for visually offering goods to vast numbers of potential buyers. No one will ever know how much retail business was lost because of the strike but many store executives are sure it was substantial. Time was bought on radio and TV stations. But these media are of only limited value to retailers for the most part and, on top of that, relatively little desirable time was available.

New York City has 10,000 newsstands and about 2,500 of them shut down entirely. All of the rest, naturally, suffered from the lack of papers to sell, which are the backbone of the business. Movie theaters and sports arenas had no effective means of publicizing their attractions.

Finally, of course, the public, which buys 5,000,000 copies a day of the New York papers, was discomfited. The news magazines diverted extra copies into the city, but there were not enough of them to meet the demand and they did not carry news with the local slant.

Whether or not the photoengravers’ wage and other demands were justified is a matter of argument. But there can be no argument about the fact that the action of a very small number of people in a case like this can directly affect the lives of many millions. New Yorkers, today, really appreciate their newspapers.

Look for more of Harry’s editorials in the next post on this blog. (Anyone can skim the newspaper archives at:  http://www.greenbeltnewsreview.com/archives/ )