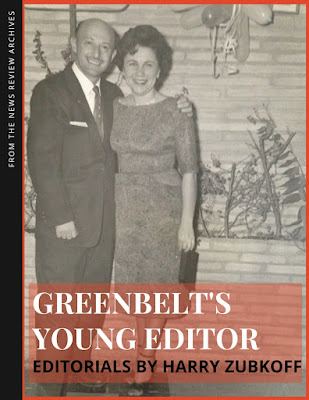 On this page, we see more views of Greenbelt life in the 1950s. And, we see Harry’s budding passion for independent, community newspapers. This blog post is the third in a series of Harry’s editorials as volunteer editor at the Greenbelt, MD, News Review.

Although we may be dubious about the circumstances under which it has happened, Greenbelt is now definitely in the national spotlight. Not only is the story of our community and the Chasanow case featured in a big spread in Time magazine; but on last Thursday afternoon our town was also mentioned at length in a phase of the nationally televised McCarthy-Army hearings.

We were particularly interested in the Time article, which reviewed the beginnings of Greenbelt as well as discussing the controversial case that the Washington papers spread over their front pages recently. Our interest of course, is aside from the fact that the Cooperator has received mention in a national magazine. As might be expected from a magazine of Time’s caliber, the facts in the story are brilliantly presented. In addition, Time’s pungent style struck hard at what it obviously believed was the chief aspect of the case.

However, there is an implication in the story which we believe may give the thousands of readers of Time the wrong impression of Greenbelt. The articles did not, or perhaps could not, make clear that the bitterness of Greenbelt’s stormy period is largely a thing of the past – at least, we have every reason to believe that this is so. Ever since The Great Move of last summer, when hundreds of residents moved out of Greenbelt because they did not wish to purchase homes here, a new spirit has begun to transform the city based principally on the pride of home ownership. Those who felt that Greenbelt offered something only as long as they could live here under low Government-subsidized rents, or who violently objected to the management of a cooperative housing corporation, have left. Those who remained and the newcomers who have since joined are now helping to plan and are looking forward to a greater Greenbelt.

On the other hand, we believe that Time’s statement that “in Greenbelt, where most of the residents are Government workers, the suspensions (of Chasanow and others) cast a pall of fear and dismay” is unfortunately generally true. As we indicated in our front-page editorial of a few weeks ago, the Government employees here are concerned that a false impression of Greenbelt may have been created by the publicity. They fear that Greenbelt may be regarded as a “queer” place with an unhealthy atmosphere. Such fears, if not put aside, could lead to the destruction of our community spirit.

It is to be devoutly hoped that the people of Greenbelt will not succumb to these fears. No one can be certain how all this will work out, but it could be that Time will tell.

There is never any excuse for the citizen who fails to take advantage of the golden opportunity to participate in his government by voting in the local and national elections. Certainly the excuse that he forgot to register is a poor one. Furthermore, Greenbelt residents can register without the slightest inconvenience since they can do so at the Center School on Registration Day, May 25, until 9 p.m.

Many of us, while we are usually anxious to vote in a presidential election, forget that all elections are equally important – whether for representatives in Congress or local dog-catcher. We have no right to complain about the kind of job our officials are doing if we have not even taken the trouble to register, let alone vote. It is no argument to say that the particular official we loathe was elected by the people in some other district or state. He may well have been elected because others, like ourselves, were not interested in participating in the election.

There is no guarantee that all those elected to office from this area will serve us well, but at least let us be able to say that we did our best to put into office the type of men whom we personally believe would be the most capable for the job.

The publication of this issue marks an important change in the history of this newspaper – and in the history of this community. For some sixteen years the Cooperator has been an institution in Greenbelt, not only on the scene but a vital part of the scene. Every organization in town, every church, every group, every club, every regularly scheduled activity, has, at one time or another had something to do with this paper, if not in direct participation, then by reading accounts of its doings in our pages. Legions of residents and ex-residents have at one time or another served on our volunteer staff. The publication of this issue, therefore, without the Cooperator banner-head, signals the end of an era.

For the last five years, repeated attempts have been made to change the Cooperator name. On several occasions the membership of the paper has voted to do so, but invariably the same situation arose. While agreeing to change the name from Cooperator to something else, the staff could never seem to agree on the something else. Standing committees, appointed to come up with a recommendation, have remained standing, so to speak, until they finally faded away. Every possible alternative name has been explored, discussed and re-discussed, examined and re-examined, debated and rejected. Difficult indeed to fill the void!

Now, however, to mix our metaphors, we have taken the bit in our teeth and have cast the die. We have decided to make a decision – with the help and understanding of our readers. For an interim period we will publish the paper without a name, meanwhile conducting a public opinion poll on suggestions for a new name. Eventually, we hope, we will arrive at a decision – one which will take the sentiments of our readers into account. Incidentally, it has been suggested that most of our readers might possibly prefer to see us retain the name Cooperator, so that name will be among the names on which the poll will be conducted.

Naturally, there are questions as to why we wanted to change the name in the first place. The reasons are difficult to put into words. When the paper was first organized, in 1937, we assumed it sounded like the ideal name to those who originally adopted it. It may very well have been, because in the beginning the paper was closely associated with, and in fact subsidized by the co-op store. This, of course, is no longer true and has not been true for many years, but the idea still seems to persist that the paper is a house organ for the co-op. Although we have repeatedly asserted our status as an independent newspaper, we believe that a change in name will be a more positive means of affirming the fact of our independence.

In addition, there are a number of Cooperators published throughout the country, at least one of which is circulated in Greenbelt – and this has added an element of confusion to some of our newer residents. Without exception, these Cooperators are closely identified with the cooperative movement or with scientific cooperative organizations. We do not have this feeling of close kinship. It is true, of course, that the paper is published by the Greenbelt Cooperative Publishing Association, Inc., and that, in fact, we are a cooperative organization. But this means only that we are a newspaper – which is published as a cooperative venture. In seeking to change our name we are not seeking to hide our identity. We are rather seeking to clarify our identity.

In the final analysis we are engaged in the business of putting out a newspaper, a typical example, if you please, of “free enterprise” in action. While we are concerned with publishing news of local interest, we are also concerned with selling what we publish, and the feeling is inescapable that we have encountered some sales resistance in trying to sell the Cooperator. Unfortunately, some recent publicity in the metropolitan papers has tended to hurt us, too. This, perhaps, has accentuated our desire to change our name – but this desire was there to begin with. We can just hear the accusation that we are retreating in the face of fire, but that viewpoint, we submit, misses the point completely. The truth is, our newspaper is a public service, and we are trying to perform this service as best we can. We believe that a change in name will make it possible to render a greater service to our community by increasing our readership acceptance, and we are asking our readers for their opinions. We are counting on them to express their opinions, not only at the polls, but also in letters to their editor.

In any event, we are embarked upon an experiment which we believe will have beneficial results. We await your reaction.

Anyone can skim the newspaper archives at:  http://www.greenbeltnewsreview.com/archives/