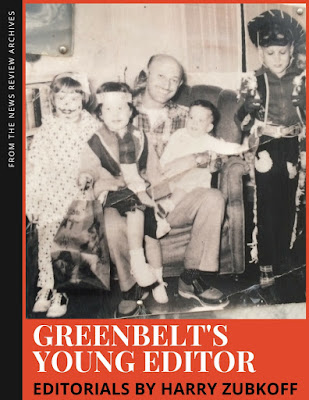 In this fourth blog post showing Harry’s editorials in the Greenbelt News Review, we see more of his opinions and stories from life in the 1950s. One line in particular is a telling example of Harry’s character: “When I do have something to say I will say it.”

(Below is Harry’s review of the Hollywood movie based on a true episode in Greenbelt. He reflected about the episode much later in his life, in a writing posted earlier on this blog: Harry recounts McCarthy-era case in our Greenbelt, MD, hometown)

On Thursday, January 10, along with quite a few other Greenbelters, I was privileged to attend a preview showing of the movie “Three Brave Men” at Jack Fruchtman’s Century Theater in Baltimore. As everybody knows by now, this is the picture which tells the story of Greenbelt’s, and the country’s, most famous “security risk”, Abe Chasanow. Of course, 20th Century Fox points out that this is not specifically his story, but rather is simply based on his experience, as written in the newspapers by Pulitzer prize-winner Anthony Lewis. But in spite of the liberty which Hollywood takes with the truth, the story is clearly recognizable.

The acting was very well done, as one would expect from such stars as Ernest Borgnine, Ray Milland, Frank Lovejoy, Nina Foch, Dean Jagger, Frank Faylen, and many others. Their characterizations and portrayals were sincere and convincing, the dialogue tight yet natural, the entire effect really moving many to tears. But for Greenbelters there is even more of a thrill than for others, because this is a movie about our town. The names and faces may be changed but the identities are unmistakable. It was fascinating to me to see how Hollywood treated the Chasanow family, and how close they could come to capturing the characters of Abe and Helen and the four children, Howard, Phyllis, Myrna and Ruthie. Equally interesting were the portrayals of police chief George Panagoulis, Mayor Frank Lastner (a truly composite character) and a certain priceless mailman. I personally was delighted with the characterization of Terry Braund, who, cleverly disguised as a Presbyterian minister, wove his own magic spell around everyone. Then, too, there was the co-op housing corporation and the frequent references to cooperatives, pro and con, which are so much a part of our daily lives.

All in all, it was a gripping picture, and, if it wasn’t exactly faithful to the facts, it was still true to life. And as Terry Braund remarked at his farewell dinner Saturday, it was not just a picture about him, or about the Chasanows either – it was a picture about justice and truth, about America. When it comes to Greenbelt (sometime in March) I want to see it again, and everybody else should, too.

I have been asked recently why I do not resume a column I started writing last winter – a column of comments on the local scene. To answer all those kind inquiries, it is because I have had little of importance to say, and I have always believed that it is not any function to fill up space with trivia. When I do have something to say I will say it.

Last week, for example, I received in the mail a package for the staff of the News Review. It was a box of candy, and with it was a card which read, “We have always appreciated the newspaper.” Now incidents like this are all too rare. In fact, we are normally on the receiving end of an incredible amount of abuse, and it is with sincere gratitude that we accept this token from a faithful reader. It helps us to renew our determination to do the best job of reporting and reviewing local events that we can, as our contribution to community life. In this respect, we also renew our perennial plea to those residents whose interests and talents lie along similar lines. We can always use more reporters, copy-readers, proofreaders and clerical workers on the papers. There is, of course, no money involved, but I doubt that anyone could find a more satisfying or rewarding way to spend two or three hours each week. Call me if you want to try it.

Last week I was pleasantly surprised to discover that the co-op gas station now vacuums every car that comes in for a grease job. This sort of customer service is a welcome innovation, and I’m sure that all the car-owners appreciate it. It is also an indication that the co-op recognized the fact that it is in a competitive business and is making every effort to meet that competition. After all, a satisfied customer is a come-back customer, and it’s only good sense to try to outdo the competition down the street in attracting and holding customers. That is, when there is a competitor down the street.

Unfortunately, there is no competitor down the street in the food business. In this situation, I think the co-op is not quite so concerned about satisfying its customers. I make that statement because I noticed two weeks ago that sirloin steaks were selling for considerably less in the Piney Branch store than they were in the Greenbelt store. Is this because there is competition in the Piney Branch neighborhood, where there is none in Greenbelt? Naturally, I wonder about that, and if there is another explanation, I hereby invite GCS to use this space to make it. Until they do so, I can’t help thinking that it seems unfair for the co-op to charge its Greenbelt customers more than its customers pay for the same thing in any of its other locations.

Just for the record, four people approached me personally, and three more by telephone, to report this situation and to ask what the newspaper was going to do about it. Actually there is nothing the paper can do about it except to publish it so that the people know about it. I would welcome any letters to the editor on this subject giving our readers’ views.

My carpool has quite a unique arrangement which I think others would be interested in. There are six of us – characters all – five drivers and one passenger. The passenger, of course, has to pay three dollars a week for his ride, which amounts to sixty cents a week for each of the drivers. Now sixty cents a week may be a lot of money to some of the carpool characters around here, but in our pool each of the drivers agreed to forego this pittance. Instead, each week, the passenger makes out a check to the favorite charity of one of the five drivers, who take turns deciding to whom the three dollars will go. As a result, several local organizations will be receiving mysterious donations in the mail, and if any worthwhile group wants to get on our list, just send your applications to Sid Barnett, 45-F Ridge, our executive secretary and general factotum. All applicants will receive equal consideration and prolonged discussion in our carpool – this I can safely promise.