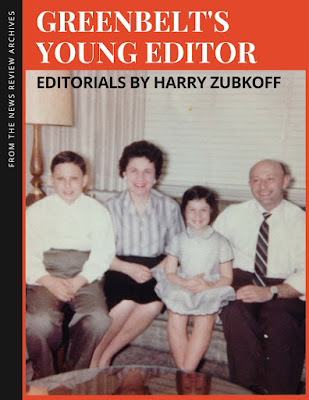 As editor of the Greenbelt News Review (in a DC suburb) during the 1950s, Harry infused his honest feelings in the following stories. He also added humor in all but one – a comment on the free press. It’s a subject he wrote about for the rest of his life.


After so many years as editor of this newspaper, I don’t know why I should be surprised at the number of anonymous letters I get, but I am. Now there are two kinds of people who send anonymous letters, and I have no use for either kind. First is the kind who writes a fairly reasonable, intelligible letter, condemning someone or something and presenting a point of view which is at least worthy of discussion. Second is the kind who writes a lot of gibberish or nonsense, sometimes nasty or vicious, sometimes just plain meaningless. The fact that neither of these two types signs these letters indicates to me that they are either ashamed to acknowledge authorship or else they have not got the guts of a jackrabbit and won’t stand behind what they say. Yet they obviously expect their letters to be printed, or they wouldn’t bother sending them. For the record, let me once again make it clear – this newspaper will print any letter which does not go beyond the bounds of decency and good taste. We will, if the author so desires, sign the letter with a pen name, but we must – repeat must – know the identity of the author beforehand. Otherwise the letter goes right into the waste basket. I am still holding a few letters which came in unsigned in the last few weeks and which I will print if the authors will communicate with me and identify themselves.

Several readers have asked me to give the general public a glimpse of the editor and the editorial writer as he really is – not the anonymous creature who sits in his ivory tower tossing down advice to the multitudes and gazing deeply into his crystal ball, but the real, living, tax-paying, church-going, mortgage carrying, baby changing, wife loving (my own), whiskey drinking (anybody’s), lovable me.

I have never noticed that knowing me has converted anyone to my point of view. On the contrary, people often look at me strangely upon learning that I’m the editor, and sometimes exclaim, “Well, maybe that explains it,” or something equally obscure.

Certainly, being known as the editor doesn’t do much for your social life. I love parties, I can eat, drink, exchange gay repartee, tell jokes and listen to tales of woe as well as the next man, but I seldom get a chance once people find out I’m the editor. Instead I find myself spending the late hours listening to belligerent critics tell me what’s wrong with the paper, or trying to avoid high-spirited citizens (not public spirited) who want me to undertake an editorial [word not legible] on their behalf(s), without, of course, mentioning their names. There is, of course, one good thing about writing editorials and that is the fact that, as with most papers, several of our staff members do it, and no one knows which ones I write. As any horse thief knows, they’ve got to find you with the horse, to hang you for the horse stealing.

People often ask why editorials aren’t signed. “I wish I knew who wrote that wonderful editorial,” a reader will occasionally say. (Very occasionally, I might add. More often they snarl something like, “What’s the matter, don’t you guys have the guts to sign the trash you write?”) But we have a policy of not revealing the identity of writers of editorials, and it makes sense. For one thing, opinions expressed in editorials are not those of the writer alone, but the products of editorial conferences, which involve a certain amount of give and take and modification. There are stories about editorial writers who went mad with power and somehow evaded the editorial conference and wrote long editorials denouncing motherhood, or the flag, or even their own newspapers (happened to us once), but these freak occasions are too rare to be concerned about. On the whole, we believe that an editorial carries more weight if it is recognized as the considered opinion of the management of this paper, rather than the opinion of a single writer.

Be that as it may, editorial anonymity is a handy thing to have around at times. It’s nice when a large drunk or an overpowering female demands to know who wrote that lousy editorial on taxes, to say cooly, “It is the policy of our paper not to reveal …” and so forth.

And there’s no law that says you can’t dimple, blush, and snigger, “Aw shucks, ma’am,” when someone gushes, “Oh, who wrote that divine …?”

This country has something of a mania for “weeks” and “days” celebrating all manner of things and occasions from the sublime to the ridiculous. But some of the observances are far above the common ruck, and deserve the public’s interest and attention.

This is certainly the case with National Newspaper Week, October 1-8. Its theme is “Your Newspaper Guards Your Freedoms.” And that’s more than just a felicitous little slogan. It’s a fact. A free press is the most potent weapon against tyranny and persecution that any nation can possess.

Dictators always take over the press as soon as they gain power and pervert it to their own ends. That’s only logical. For dictatorship can’t stand the freedom of expression and debate a free press stands solidly for.

Normally, I welcome expressions from interested readers about items which appear in the News Review. True, most of the people who call me do so to register a complaint – they don’t like this article or that one, they disagree with the editorial, or they would like to point out some glaring errors. Occasionally, I must admit, their observations have some validity, and, poor mortals that we are, mistakes do get by once in a while. (The majority of mistakes that are blamed on us are made by our printer of course.) But, like I said, I do indeed welcome comments and criticisms from our readers – although it would be nice if only once someone would call to say something nice.

But really now, you have to draw the line somewhere. Despite a lot of opinion to the contrary, I do sleep. I expect and get lots of calls on Thursday evenings, right after the paper is delivered, and that’s okay. In fact, I’d worry if I didn’t get any calls. But why do some people have to wait till midnight or later to call? Maybe it takes them that long to work up their courage and maybe you don’t think they’ll need all the courage they can get the next time they call after midnight! Some people, I guess, must brood about their problems all night because they wait until 6 or 7 a.m. to call me. Of course, I have to get up anyway to answer the phone, but in my early morning semi-conscious state, conversations and complaints somehow fail to enchant me, and I’m sure my responses to indignant questions are something less than intelligible.

There is a happy compromise. Call me any time in the evening, during the commercials on television when you’re in a hurry to get back to the screen for the climax of the show you’re watching. Then we’ll all be happy, and can discuss our problems at length and at leisure.

This is the fifth consecutive post with Harry’s editorials. Look for the sixth (and last) of my chosen editorials next week. Anyone can browse the Greenbelt News Review archives at: http://www.greenbeltnewsreview.com/archives/