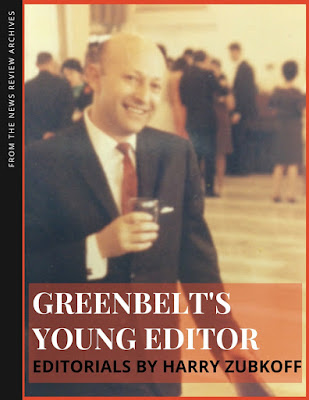 This page is the sixth (and last) consecutive post displaying some of Harry’s editorials as a young man in Greenbelt, MD. They’ve shown me more about the history of my childhood town and my dad’s experiences there.

The Ratzkins are moving. Jack and Edith, whose two children were born here, went to school here, and grew up here, have sold their house and now they’re leaving Greenbelt. They have a lot of friends and a lot of good memories here. Jack brought one of those memories, in concrete form, over to me the other day to place in the News Review archives along with the great wealth of historical material we are saving for posterity.

It seems that back in 1940, before any of the present churches in Greenbelt were built, all of the various religious groups in town got together with a unique project in mind. It was their thought that possibly the people of Greenbelt could build one big church with an individual chapel for each faith and a common meeting room-auditorium for their social affairs. Imagine the Baptists, Catholics, Jews, Lutherans, Methodists, and Congregationalists together under one roof. This would indeed be a House of the Lord. Though it didn’t actually materialize, it is a tribute to the faith and imagination of our early residents that they even thought of it. In fact, it went even further than the thinking stages. Jack, who is a man of many talents (you should hear him sing), was assigned to draw up the plans for the proposed building. While cleaning out his attic preparatory to moving he ran across these old blueprints and decided to donate them to the News Review.

The blueprints suggest a very impressive building. It would have been the first of its kind in the country, perhaps even in the world, and it came mighty close to happening. The reasons why it didn’t happen are vague, although Jack thinks there are still some old-timers around who might remember, and who might be willing to enlighten us. Are there? Anyway, it all proves to me that Greenbelt is an interesting and wonderful place to live.

By the way, lots of people are moving these days. If you run across any interesting historical material while cleaning out your attics, don’t throw it away. Give it to the News Review. And don’t throw away your old books either. We’re building up quite a library in our office, and everybody is invited to come down any Tuesday evening to see our collection.

I heard an interesting item on a TV newscast the other night. A man was waiting at the corner for the light to change so he could cross the street, but when the light changed a car pulled up and stopped all the way across the white line, directly in his path. He could have walked around the front of the car or around behind the car, but this pedestrian was not an ordinary guy. No sir. He was an independent thinker, and he was tired of automobiles blocking the crosswalks, so he walked up the right fender, across the hood and down the left fender. This was a brave thing to do, and I admire him for it; but unfortunately, the driver of that car was an off-duty policeman, and he didn’t take too kindly to a pedestrian challenging the supremacy of a vehicle, so he arrested the poor guy. And do you know, the judge fined that pedestrian $25.00 for malicious destruction of property!

I think that judge made a mistake. He had a perfect opportunity to reaffirm the dignity of the individual in our society and to assert man’s superiority over the machine. He had a perfect opportunity to put some teeth behind those white lines, to demonstrate that they apply both to people and to vehicles. After all, I have seen policemen give tickets to jaywalkers for failing to cross the street between the white lines. Why shouldn’t they give tickets to the cars which stop directly athwart the white lines? This could be the subject of a real crusade. But that judge capitulated, and he set the cause of personal freedom and liberty back at least fifty years. Maybe he figured it would be bad for automobile sales if the pedestrian won the case, since the economy of the whole country is so closely tied in with the automobile industry. Ah well, I suppose this is the price we pay for progress. But if I were that judge, I’d have handled it differently, wouldn’t you?

A few months ago I started taking piano lessons from a remarkable young man named Martin Berkofsky. All my life I’ve wanted to learn how to play the piano. Those of us who grew up during the thirties will never forget those depression years and how tight the money situation was. Even so, a lot of kids were able to take piano lessons then, but I was not one of them. So you see, I’m really just a frustrated concert pianist – a virtuoso, if you please. All I lack is knowledge, training and talent. What’s more, I don’t practice as much as I should, and sometimes I don’t see how Martin puts up with me. But then, as I said before, he is a remarkable young man.

If you’ve been reading the News Review over the years you’ve probably seen his name many times, giving a recital here and a recital there and generally playing around (piano, of course) quite frequently. He has also distinguished himself in other ways – as a winner of science awards in school, for example, and as an authentic young American genius. I am old enough to be his father, and I feel a sort of vicarious paternal pride in him – at least I understand just how proud his parents must be of him, and of themselves, too, because after all they play a vital part in making him what he is. It makes me feel good to go to him for my piano lessons. He kind of restores my faith in the upcoming generation – because it makes me sad to see those bored and restless youngsters who inhabit the Center and who never seem to have anything constructive to do.

For all the bored souls, children, teenagers and adults alike, I recommend piano lessons as a release for their nervous energy and as a creative and constructive outlet. And for anyone who would like to work in the community interest, there is always a job to do on the News Review.

It has been suggested to me that on the occasion of my departure from the editorship of the Greenbelt News Review it would be appropriate to express some final comments. The truth is, however, that I have little to say, and nothing that has not been said before. But at the risk of sounding trite, perhaps I will say a few things that have not been said recently.

As I see it, the News Review is the major unifying element within the city, the force which has done more than any other single civic activity to make a city out of a housing project. It has given Greenbelters a sense of belonging, a sense of participation, and, frequently, a feeling of pride in their community. Our object is to report the local news as fully and as accurately as possible, and if we have not always been as good as we could be, why, this is a criticism which can be leveled at any other newspaper in the country – and at every institution in the country. The point is that we are honestly striving to be better at our job all the time.

Those of us who have devoted our time and our energy to the News Review have been motivated by a genuine desire to further the best interests of our community. We believe that this is one of the best areas of civic activity, and one in which there are too few volunteers.

If I have anything to say at all, it is to urge more of our readers to participate in local activities, to contribute more of themselves in terms of time and talent for the benefit of their community. Today there is a crying need for more active participation by all sorts of people in all sorts of local organizations (and the News Review is only one of many). It is unfortunate but true, I think, that only a tiny fraction of our residents are carrying the great burdens of keeping our town going forward in all its many facets, while the vast majority too often succumb to the temptation of watching television. The community desperately needs more public spirited citizens who will work for their neighbors and for themselves toward the common goal of making Greenbelt a better place in which to live and bring up children.