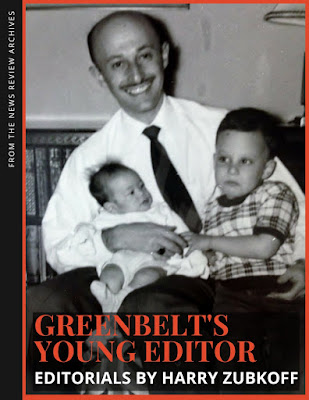 In this glimpse of Harry’s life, he was volunteer editor of his city newspaper, for 10-12 years in the 1950s and ’60s. Named the Cooperator in 1937, Greenbelt, MD, residents changed its name to the News Review in 1954. After reading several editions he had saved in old boxes, I skimmed the online archives and chose additional editorials to share with you. They begin in 1950, when Harry was 29 years old, a year after his move to Greenbelt from Buffalo. They showcase his writing style and his views at the time, as well as local and national history.

Drew Pearson is one of the most controversial of all columnists. He has thousands of warm admirers and thousands of bitter enemies. Most of his columns make a point of stepping hard on many toes – and the more prominent the toes, the better. However, one of his recent items is likely to be given near-unanimous approval. It discusses the bad financial deal the infantry soldier receives by comparison with his compatriots in other branches of military service.

Writes Mr. Pearson, “Under the current army pay system, the real heroes in the Korean war are drawing the least pay. They don’t even get a fair share of the glory when the publicity and medals are dished out.

“These unsung heroes are the infantrymen, who form the army’s battering ram, but who are not paid as much as the technical men and the pencil pushers behind the lines.” He goes on to say that the average monthly pay of a member of a rifle company is $135, as compared with $226 for an air force combat crewman and $172 for a submariner. Combat infantrymen once got a $10 a month bonus, but this is no longer given.

Moreover, according to Mr. Pearson, infantrymen are actually the poorest paid of all the troops in the army. Ordnance, signal corps, armored force, quartermaster, artillery and everyone else does better financially. And the ironical part of it is that all these other troops are basically, simply the infantry’s support. They exist for the sole purpose of aiding the infantry in its grim task of closing with and capturing or destroying the enemy. If the infantry fails to do that, the cause is always doomed.

Relatively little stress was placed on the infantry in the so-called New Army we heard so much about a year or so ago. This was to be pretty much the mechanized army, the push button army, in which almost everyone would be a technician of some kind. The Korean war changed that concept, and with a vengeance. It was infantry – the poor, bloody infantry of legend – that fought the delaying actions.

Infantry takes the beating in war. It suffered 70 per cent of the casualties in World War II, perhaps a higher percentage in Korea. Yet, Mr. Pearson says, In World War II it got only 11.6 percent of the medals. And as noted before, it is way down the line at the pay table.

It can be argued that mere money is a small recompense for asking a man to risk his life in war and, at best, live miserably. But it is the only recompense possible – no way exists to make the infantryman’s lot an easy, pleasant one. It is certainly a reasonable assumption that the footslogger with a rifle in his hands deserves a better break than he’s now getting.

No one who has never seen combat can possibly understand what it’s like. But, when we wake up with big heads on New Year morning, let’s stop for a moment and think – and pray – and give thanks to those brave men who are making our New Year celebrations possible. Let us remember the sobering figure of more than thirty thousand casualties. Let us join their loved ones in crying for them!

(Did Harry take a break to help with his soon-to-be-born daughter?)

It is with considerable reluctance that I have offered my resignation as Editor of this newspaper, and even though that resignation was changed to a four month leave of absence it is still a severance of a relationship which I have enjoyed immensely.

The Cooperator to me represents a way of contributing to community living. It is an instrument which can be used to great advantage, particularly in an isolated location like Greenbelt, not only to keep everyone informed about matters of civic interest, but also to promote the community consciousness, to make friends out of neighbors.

Too many of us, today, are prone to forget or to ignore our obligations to each other. We are no longer savages who have gathered together behind a stone wall for our mutual protection. On the contrary, we are, presumably, civilized people who have recognized that community living offers many advantages which are otherwise inaccessible to us as individuals. And that very recognition imposes upon us all the obligation to contribute part of our talents and energies to our own mutual welfare. We simply cannot exist completely alone or detached from our neighbors; yet, many of us are trying to do just that.

It is a matter of deep concern to me that so few of us display any constructive interest in our community affairs. It is even more disturbing because so many who are shrinking from all contacts with community activities are so richly talented and so capable of making significant contributions. The spectacle of a city council election with only six candidates, or a GCS membership meeting with less than a quorum in attendance, is both saddening and humiliating.

Now, particularly because it is the beginning of a new year, may be a good time to take stock – to measure the benefits which accrue to us by virtue of our community life as against the contributions which we are making in return. Perhaps, as a result of such stock-taking, many will find it possible to devote more time to participating in our community’s activities. There are so many varied fields of interest in Greenbelt, so many organizations actively engaged in furthering the common welfare, and all of them eager to welcome and absorb new talent. Surely we can, each of us, pursue an activity to his liking.

I believe that the Cooperator is an ideal medium to satisfy the creative urge in each of us, an ideal vehicle for self-expression. The Cooperator has behind it a long history of worthwhile and significant contributions to the community life. Indeed, I believe it to be one of the foremost factors in the transition of Greenbelt from a government housing project to a living, vibrant city. And I believe that it will continue to figure prominently in the growth and development of Greenbelt as it changes hands from government to private ownership. The Cooperator will, I am sure, continue to make itself heard in Greenbelt, with vigor and dignity, sometimes loudly, or bitterly, or quietly, or gently but always sincerely, and always honestly.

In this connection, I am particularly pleased with the choice of Bobby Solet as Managing Editor. She brings to the Cooperator a forceful and dynamic personality, the impact of which will soon be apparent on these pages. Withal, she is quiet, thoughtful and level-headed, and, I am sure, will attract many additional recruits to augment the small staff of the paper.

Those of our readers who have an inclination to work on their community newspaper would know that the opportunity is here and that they will be welcomed. It is a satisfying and rewarding experience, an experience for which I shall always be grateful.