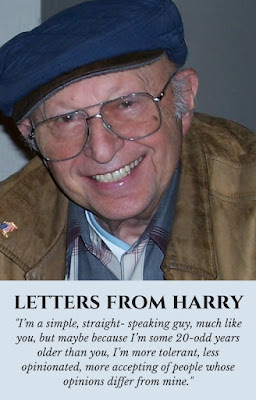 My dad answers questions I never asked him, in the following four communications he wrote in his elderly years. Each reveals an activity or feelings from his past, and each offers a bit of advice to someone who was special in his life. So, to everyone ever touched by – or just curious about – Harry’s communications, please enjoy!


Concerts at the beach

It’s so nice to get emails like this with news about the family. I’ve been thinking about all the [cousin’s family], too, especially since I saw those photos of the ice caves at Crystal Beach. Everybody who ever grew up in Buffalo had to have gone to Crystal Beach. I have lots of memories about the Beach, and about the dance hall where the big bands of the 1930s and early ’40s used to play. In fact, it was the memories of some of their performances – Glenn Miller, Benny Goodman, Artie Shaw, and other orchestras, that motivated me to write a series of articles about the music of the WW II Era for the newspaper in Leisure World.

Now I’m in Riderwood, another development populated by old folks like me, and I have a whole new audience for these articles, since everybody here remembers that music. I just wanted you to know that I’m okay and adjusting to my new circumstances. Email exchanges like this are so welcome and so helpful. It’s so much easier to keep in touch this way than by the antiquated method of writing letters and sending them by snail mail. Keep them coming.

Too bad the Riderwood newsletter rejected his idea for the music column.

I deeply regret that Jeanette and I had to leave the celebration Friday before we got a chance to see you and shake your hand. And I can’t tell you how honored and flattered I was that you took the time personally to arrange matters to make it easier for us to attend. I used to think that the 36 years I spent in my job at the Pentagon (plus service in the Army in WW II for a total of almost 40 years of government service) was more than enough for anyone, but your 50 plus years, and Wilma’s, too (for a total of around 100 years) whew!! … Anyway, Ron, I wanted to express my heartfelt appreciation for inviting us and taking the time and trouble to make special arrangements.

Now, a word of advice from an older retiree – do not, repeat do not wait till you finish any projects at home such as remodeling or renovating, etc. before traveling or vacationing. Start booking cruises and other travels as soon as you can, while you both have the strength and stamina to enjoy them. The longer you wait, the tougher it gets to travel. So do it now. And enjoy each other for leisurely breakfasts, lunches and dinners, which, I suspect, you haven’t done very often over the past 50 years.

As for remodeling, I waited till I was 85 before I decided that our big house was too much for the two of us to handle. So we sold out and moved into a nice big apartment which, even though it’s much smaller than any house, relieves us of the problems of maintenance and upkeep and endless chores, as well as stairs up and stairs down etc. It was almost too late, because even though our kids and grandkids and nephew and niece and others helped a lot, it was nevertheless a great physical hardship. I should have done it ten years earlier, when I was 75 and still fit enough to stand the strain.

I feel almost like a member of your family, a cousin, maybe, because Meredith is like my second daughter, the one I never had but always wanted, and I love her.

Anyway, Ron and Wilma, congratulations and best wishes for the best years of your life, the ones starting now.

This is too long to put into an email message, so it will be a letter, instead, with enclosures for you to read at your leisure. I’m writing it over a period of days with additions from time to time as they occur to me. I’ll start by saying I’m sorry you’re disappointed in me, but that’s your problem, not mine. I dunno why I’m perplexing to you. I’m a simple, straight- speaking guy, much like you, but maybe because I’m some 20-odd years older than you, I’m more tolerant, less opinionated, more accepting of people whose opinions differ from mine. Maybe, too, it’s because I don’t have the energy or the stomach to argue with people who disagree with me. I don’t feel as strongly as I used to feel that I have to justify my beliefs or argue the rightness of my convictions. And I don’t feel as strongly as I used to feel that people whose views differ from mine are necessarily wrong. Sometimes they’re right and I’m wrong. And I’m more willing than I used to be to examine the other guy’s views and to accept the fact that he is honest in his beliefs as I am in mine.

I suspect that you’re disappointed in me because I haven’t been making substantial comments on the articles circulating in our round table. Or maybe you want more of my comments on my years in the Pentagon, which could maybe shed more light on what’s going on right now? Maybe you just want more of my views on politics, or government, or the Iraq war, or the Democratic or Republican parties? Views that are based on my experience in government?

The problem is that I feel about my Pentagon years and the work that I did there much the same as I feel about my WW II years and my wartime experience. It’s all in the past, no longer pertinent, not something I want to dwell on any more. I know that some people never grow out of their wartime experience or their worktime experience. They want to relive those times all the time. I can understand that, but I think it’s because they have nothing new to occupy their minds, so they just want to live in the past. Some people never outgrow high school, either. But I don’t want to live in the past. I’m fully occupied with the present and the future. WW II is more than 60 years in the past. My retirement from the Pentagon is more than 20 years in the past. The world and I are now absorbed in the problems of the present.

So, let’s talk about the present. We have gone through the traumatic experience this past year of downsizing, moving from a big house to a small apartment. We’ve been here now since last August and have finally begun to settle in and get the apartment close to the shape we want it in. One of the three bedrooms has been converted into an office with built-ins to house our files, books, records, tapes and CDs, as well as the computer. One, of course is our bedroom and the third is our den/lounge, TV room, spare guest room. Now we’re starting to get involved in community activities. Jeanette is involved in a couple of women’s groups. I have volunteered to serve on two committees, both of which involve a few hours of work each week. Then, too, we go to lectures, social affairs, synagogue affairs and services. I got into a weekly poker game, too.

Aside from all that, I agreed to write some articles for a monthly discussion group, dealing mainly with Jewish affairs and Holocaust history. Enclosed are a few things to read about a Holocaust project that is taking a good deal of my time and interest. These are not the kinds of things that I would expect our round-table group to be interested in. The problem is that they do not leave me much time to comment extensively on matters or articles for our round table, and I’m sorry about that. I still send articles for you all to read and read the articles that you all send me, but as far as I can see, the discussion part of our exchange has diminished considerably. I’m not the only one whose volume of comment has shrunk.

Anyway, what I’m trying to say is that I’m trying to cram a lot of activity into living in the present. I’ll be 86 in a few months – in June, to be exact, and the odds are that I really don’t have many more years ahead of me. I would rather think about and devote my creative energies to present-day matters than to spend my remaining time remembering the past.

When I saw this TIME magazine cover, I immediately thought of you, since you will be thirteen years old in less than a year. The article inside also made me think of you. So, in case you haven’t seen it, I thought I’d send it to you. I enjoyed reading it and I’m sure you will, too. About 15 or 20 years ago, I helped with a similar article for Newsweek magazine on teen-agers, mostly 16 to 19-year-olds, and I learned a lot then about young people. The trouble with growing old is that we forget what it was like to be young. That’s why you have to keep reminding your parents that you have thoughts and feelings and yearnings and wishes, just as they did once and probably still do. The important thing is to communicate to them and with them, which means simply to talk to them and explain how you feel about things. You’d be surprised, I’ll bet, to see how interested they are to hear your views on everything.