After Harry died in 2014, I inherited the boxes he’d long-ago packed with bulky, brown accordion folders containing his typewritten novels – or parts of them. I remember reading only one manuscript he was trying to publish in the 1970s. You can read the synopsis to one I’d never seen, last week on this blog.


In addition to the boxed versions, I found a folder on his computer titled “BOOK 4”. It contains 29 documents that apparently make up part of another novel. To give you a taste, here’s one document, last modified July 22, 1994, titled “One”. At some point, he had asked a friend to read his manuscripts, and she confirmed that Harry’s novels are (loosely) based on his experiences.

Bill Freelav was killed in my office, sitting at my desk. That made it kind of personal, even though I didn’t know him. He was the only person on the sixteen member staff of the Riverview News I hadn't met yet. That’s because he was out of town the previous week when I took over as Editor and met them all. I was looking forward to meeting him tonight, but not this way. 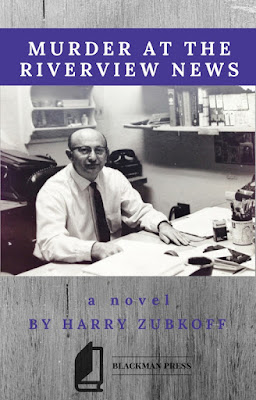 When I approached the newspaper office, which was in the basement of an apartment building, I had a feeling something was wrong. You cannot spend ten years fighting spies and terrorists as an officer of a top secret NATO security unit without developing an instinct for trouble. My problem was that I didn’t trust that instinct, not at that moment. I thought it was compounded largely of fear, and I hadn’t yet learned how to handle the fear that possessed me. That’s why I had retired as a Light Colonel after twenty years in the Army’s Special Forces, with a bright career ahead of me if I’d stayed in. That’s why I was here, the new editor of a small town weekly newspaper, trying to wind down from the stress and the fear that gripped me constantly. But that’s another story. So I ignored the instinct and the growing sense of unease as I walked up the sidewalk leading from the street to the big, thick, heavy glass double doors of the entrance.

It was almost nine-thirty on a balmy Monday evening in mid-August. No cloud cover obscured the emerging stars, and I was able to pick out the steady glitter of Polaris off the end of the Big Dipper, pointing eternally to the north. All things considered, I thought for the millionth time, I’d rather be flying. Looking through the glass doors that opened onto a fairly large landing, I could see the bottom few stairs on the left leading up to the first-floor apartments and the landing on the right for the steps leading down to the newspaper office in the basement – my office, as of one week ago.

I pulled open the door on the right and, as I descended the stairs, the feeling of apprehension that had gripped me outside became stronger. The small hallway in the basement should have been brightly lit. It was dark. The light switch on the wall was in the “on” position. I flicked it twice. It was still dark. I could see the bulb dimly in the ceiling. I had put in a new one myself last week. At an even six feet, I could just reach it standing on my toes, the only one in the office my first night there who could do it. I was about to reach up now to jiggle it, but I stopped myself. The door to the newspaper office was slightly open, which meant someone was in there. If someone was in there, there should have been some light, at least a glimmer of light, showing through the opening. But there wasn’t. It was dark. The danger instinct tingling the nerve endings in the back of my neck was now too strong to ignore.

I had been in situations like this before, where death or worse – there is worse, believe me – waited on the other side of an open door. At the far end of the basement hallway I could see the very pale square of glass set in the top of the back door leading outside. It seemed to be closed but, even as I strained to see it in the dark, I heard the automatic latch, always set on lock and only able to be opened from inside, click shut. Someone must have just gone out that door. I switched my attention to the office door. It was the kind that opened from the inside into the hallway. I got down on the floor and, lying to the side of it, stuck my hand out and eased it halfway open. I was not in the doorway, in case someone inside wanted to take a shot at me. I’d been in that situation before, too. And someone had taken a shot at me before; several, in fact, and on several occasions. The last time I had gotten careless. I’d thought that because I’d never been hit before I was invincible. I was wrong. And now my nerve was gone; I was gripped with fear and starting to sweat. The bullet wound in my upper left chest, just below the shoulder, pretty well healed now, gave me a small twinge as I got up on my left elbow and eased my head around the door jamb.

It was dark inside, but I could just make out the lighter squares of the big picture windows that came halfway down the wall at the far end of the room. Except for that half wall, the rest of the room was all below ground level. I listened for the slightest sound. Nothing. I sniffed the air, all my senses alert for a sign of life, a rustle of breath, a movement of air, a scent of something, anything. There are some scents you never, never forget. One is the scent of blood, the coppery acrid scent of blood freshly spilled. God help me, I knew that scent well enough. It wasn’t there.

I eased up to my feet, still keeping to the left of the open doorway, cautiously reached my arm around, groped for the light switches, found them and clicked them on. The lights blazed up. My eyes swept the very large basement room in one quick glance. The office was empty, except for the furniture and the dead man sitting at my desk. My desk faced the window. The previous editor liked to work with his back to the rest of the office. Not me. I was going to turn the desk around to face the office tonight.

He was slumped face down so that all I could see of him was the back of his head, thick, luxuriant, dark brown hair, a lot like my own, his face invisible to me, his arms hanging straight down at his sides. The handle of a knife stuck out of his back. No telling how long the blade was, but it was obviously long enough to penetrate the heart and kill him instantly, because there was no blood visible. I did not have to feel for a pulse to know he was dead, but I did anyway; fingers at the throat where the blood pulses through the carotid artery. Nothing. He was still warm, dead not more than ten or fifteen minutes. I went to another desk, picked up the phone and hit the 911 buttons. A woman’s voice answered.

“I want to report a murder,” I said. She was silent a minute, as though unwilling to believe her ears. “Are you still there?” I asked.

“Excuse me,” she said, “I don’t think I heard you right. Would you repeat that, please?”

“I want to report a murder,” I repeated.

“Is this some kind of a joke?” she asked. Then, with sudden suspicion, “Who is this? Is that you, Phil?”

“No ma’am,” I said. “This is Laurence Stranger. I’m the new editor of the Riverview News. This is not a joke. There’s a dead man here, and he’s been murdered.”

“Where are you?” she asked. Her senses were starting to catch up.

“I’m at the newspaper office on Canal Road.”

“I know where it is,” she said. “Stay there, and don’t touch anything.” In control again, no uncertainty in her voice.

So I went outside and looked at the sky to see if Polaris was still there. It was. I watched it to make sure it didn’t get away until the cops showed up. It took them six minutes. The squad car pulled up to the curb quietly, no sirens, no blinking strobe lights, no screaming rubber or squealing brakes. Two uniformed cops got out of the front seat and a big, broad-shouldered man got out of the rear. He was wearing a well-cut suit that fit him perfectly and he handled himself with the ease and confidence of a man in top physical condition. He stopped in front of me and looked me up and down.

“You’d be Stranger,” he said softly, but there was an undercurrent of hostility in his voice. “Now what the hell is this all about?”

I had to look up at him, which made him around six foot four and, judging by the width of his shoulders, at least 240 pounds, which gave him about fifty pounds on me. He looked hard, too. Not a man to tangle with. “There’s a dead man down there,” I jerked my thumb at the office. “Somebody stuck a knife in him.”

“You two,” he waved a hand at the two uniforms, “go take a look.” They went, quickly, and within thirty seconds one of them came back.

“Can’t see his face,” the officer said, “but I’d guess it’s Freelav. Looks like him from behind, anyway.”