Harry weighs in on scandals, in letter to old friend 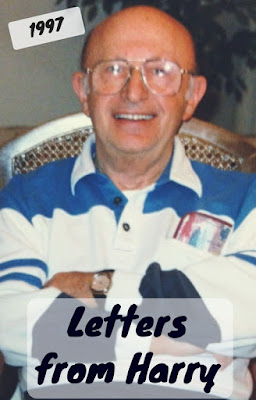 We continue to learn more about Harry’s professional life and relationships through the following letter he wrote in 1997 to a long-time co-worker and journalist. He comments on scandals in the military and a scandal of sorts related to his government publication. And he gives a few updates on his personal life.

By now you must realize that I am the world’s worst correspondent. For some reason I just can’t bring myself to sit down and write letters. I mean to write. I want to write. I keep composing letters in my mind to various friends scattered around the world. I just can’t seem to actually write them. In your case, I’ve been writing mental communiques to you for the past year or so, but today it came to me quite forcibly that time is slipping away and I better stop procrastinating and start writing. So – here goes with a number of things I’ve wanted to tell you.

1.  Of course, I read your article on the sexual harassment problem in the Army when it appeared in the Outlook section of The Washington Post just before Christmas. I wanted to tell you then, and I’m telling you now, that you hit the nail on the head. Since then, I’ve heard that the scuttlebutt around the Pentagon is that they’ve uncovered the tip of the iceberg, and that a lot more is going to be breaking in the next few months – not only in the Army, but in all the services, especially the Navy again.

My own opinion is that as long as men and women are thrown together in stressful situations, there will be problems; and as long as they are thrown together in non-stressful situations, there will also be problems. There simply is no getting away from it – men and women will get together somehow, no matter what the circumstances are, and more often willingly than not. I don’t see how it can be avoided without complete separation of the sexes in the military, and of course, that’s no longer possible. So, from now on and forevermore, incidents are going to occur and recur, from time to time, just like cheating scandals at the military academies. These things are, in a manner of speaking, inevitable.

So, the question is, how do you handle them when they arise? Like you said, the last thing we need is another committee to start an investigation. What they need is a top ranking General, three or four stars, to go out and look at the situation and then take some decisive action. Unfortunately, nobody asked me what to do.

2.  Remember Fred Hiatt about whom I wrote a critical piece that you were good enough to publish in the magazine? After he left the Pentagon beat, the Post sent him to Russia; they even gave him some language training and other schooling to prepare him to be a foreign correspondent. (Too bad they don’t give young Pentagon reporters some schooling, too.) Anyway, he’s now back in Washington and occasionally writes a piece for the Op-ed page. Obviously, he has matured into a respectable commentator and has written some very fine and thoughtful articles in recent months. So I wrote him a letter to tell him so, and got a nice response from him. I thought you’d be interested.

3.  Regarding the Current News files that were decimated by Maitre at Boston U., the final resolution of that problem was that the remaining files were shipped down to the Air University archives at Maxwell AFB in Alabama. Dr. Silber paid the freight, which I believe cost somewhere around ten grand. I think I mentioned to you that Dick Kohn, former Air Force historian and now a professor at North Carolina got into the act and helped make those arrangements.

Meanwhile, Maitre turned out to be...well, as W.C. Fields said when he met Mae West, “There is less here than meets the eye.” You might say that all’s well that ends well, but every time I think of Maitre I get furious all over again.

[Note: Harry was referring to the Current News, a daily publication he managed during his Pentagon career. Other letters in his files show that the Defense Department turned over the Current News archives to a communications director at Boston U., after much research and requests from other organizations to keep the files for scholarly research. It turned out that the Boston U. director later disposed of them, infuriating Harry and others. Certain individuals eventually retrieved the archive.]

4.  I read your review of Colin Powell’s book with considerable interest. I know him, not well, but reasonably well, and there are some things about his book that “give me pause.” You did a masterful job with that review, and some of what you said echoed my own reservations. It should have been printed in the mainstream press, where it could get much wider circulation, but even so, enough Washington insiders saw it so that it made an impression. Have you had any comments?

5.  I celebrated my 75th birthday last June and my 53rd anniversary last August – in fair health. Did I tell you that for the past seven or eight years I have been taking courses at the University of Maryland – one or two each semester? (I’ve also been teaching English there.) Last semester I took a course in the political process for journalists, taught by two people; one is a former Maryland State Senator, a Republican lady, and the other is the former Democratic Governor of Maryland, William Donald Schaeffer. Both were a joy to listen to – fascinating, really. This semester I’m taking a course taught by Hodding Carter: Professional Seminar in Public Affairs Reporting. It should be interesting; certainly, as in all the other courses I’ve taken, I’m bound to learn something. I must say, Ben, the older I get, the more I realize how little I know, or, to put it another way, how little I’ve learned along the way.