John Denver (an artist from my era) is quoted as saying this about music: “Music does bring people together. It allows us to experience the same emotions. People everywhere are the same in heart and spirit. No matter what language we speak, what color we are, the form of our politics or the expression of our love and our faith, music proves: We are the same.”

I believe Harry would have agreed. Here’s another music-themed article he wrote, on Aug. 14, 2011, probably for his community newsletter in Leisure World of Silver Spring, MD.


Some musical shows have so captivated the public that they never disappear from view. Among these perennial favorites are such musicals as Showboat, Porgy and Bess, The Music Man, 42nd Street, Fiddler on the Roof, My Fair Lady, South Pacific, Oklahoma, Carousel, Yankee-Doodle, Gigi, and this one – Meet Me in St. Louis. Just as there is never a day in this country when there is not a gigantic sale of mattresses, so is there never a week or a month when one of these musicals is not being performed somewhere. High school and college drama and music classes, professional and semi-professional singers and actors, and many wannabe producers, directors, set designers, etc., are caught up in the magic of theater art and devote their talents to these shows. We attend such musical shows every chance we get, which brings us to one of our favorites, “Meet Me in St. Louis”.

I would surmise that most of us, if not every single one of us, have seen the 1944 movie that featured Judy Garland in the starring role. But it might surprise you to hear that Judy was very unhappy when she was chosen for it, afraid that it would be a step backward in her career. She was already 22 years old and had played an adult role before in “For Me and My Gal” in 1942. Now they wanted her to go back to playing a high-school girl with a crush on the boy next door.

She’d had enough of that with her co-star Mickey Rooney in a dozen such pictures and she did not want to be stereotyped as the perpetual teenager. She even went to Vincent Minnelli, who had been signed to direct the film, to try to persuade him that she was wrong for the role and to choose somebody else. He strongly disagreed, and the two got off to a bad start. Subsequently, throughout the filming, they simply did not get along together, arguing and fighting about many aspects of the film. He kept repeating takes and re-shooting scenes over and over again till she wound up screaming at him. (As everybody knows now, they eventually married. Go figure.)

Judy needn’t have worried. She was a smash hit and that role confirmed her as one of the greatest singing stars in Hollywood history. In retrospect, it’s hard to visualize anybody else in Judy’s role, singing the songs that she made famous. Who else could express her love for “The Boy Next Door” as plaintively as she? And who else could belt out “Meet Me in St. Louie, Louie” or “The Trolley Song” as lustily as she?

Also in the score was one of the most popular and endearing Christmas songs ever written – “Have Yourself a Merry Little Christmas” that Judy sang to Margaret O’Brien in a touching scene. Judy did not want to sing the original lyric: “Have yourself a merry little Christmas, It may be your last, Next year we may all be living in the past.” She thought it made her seem too mean-spirited. So Hugh Martin, who wrote all the music and lyrics together with his partner, Ralph Blane, gave Judy a new lyric – “… Let your heart be light, Next year all our troubles will be out of sight.” Anyway, when you come away from this musical, you come away humming and singing the catchy melodies and the easy lyrics.

When Louie came home to the flat, he hung up his coat and his hat. He gazed all around, but no wifey he found, So he said, “Where can Flossie be at?” A note on the table he spied, He read it just once then he cried. It ran “Louie, dear, It’s too slow for me here, So I think I will go for a ride.” 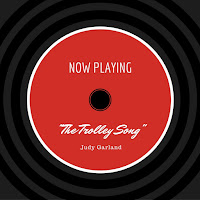 With my high starched collar and my high topped shoes, and my hair piled high upon my head, I went to lose a jolly hour on the trolley and lost my heart instead. With his light brown derby and his bright green tie, He was quite the handsomest of men, I started to yen, so I counted to ten, then I counted to ten again.

He tipped his hat and took a seat, He said he hoped he hadn’t stepped upon my feet. He asked my name, I held my breath, I couldn’t speak because he scared me half to death. Chug, chug, chug went the motor, Plop, plop, plop went the wheels, Stop, stop, stop went my heartstrings, As he started to go then I started to know how it feels, when the universe reels.

The day was bright, the air was sweet, The smell of honeysuckle charmed you off your feet.You tried to sing, but couldn’t squeak, In fact, you loved him so you couldn’t even speak.

Buzz, buzz, buzz went the buzzer, Plop, plop, plop went the wheels, Stop, stop, stop went my heartstrings, As he started to leave I took hold of his sleeve with my hand, And as if it were planned, he stayed on with me and, It was grand just to stand with his hand holding mine, To the end of the line.