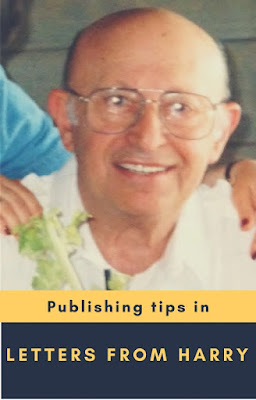 Harry’s work protégés and editor friends will appreciate these two letters he wrote in the 1990s. Although his references to publishing costs may not apply today, his reasoning does. We learn more about his experiences in the newsletter industry and with the book he co-authored in ’94. And, once again, we see his spirit of encouragement to fellow writers and in general.

I’m truly sorry that you had to stop publishing your newsletter. Over the years I’ve seen a great many newsletters begin with high hopes and end with despair and disappointment. Many of them had so little going for them that they deserved to die. But not yours. I thought yours showed great promise right from the start and, more important, you kept improving it to the point where you were producing a highly professional product with a potentially huge audience.

From the vantage point of an outside observer, I can make a few guesses about what happened because I’ve seen this happen time and time again. The problem is that you can’t get enough money invested in the effort to give it a fair chance to succeed. The money problem is compounded by the fact that the production of a newsletter is nobody’s primary job, but rather a part-time, spare-time activity for people who are already fully occupied with their primary jobs.

The problem is further compounded by the fact that every bureaucratic organization (like yours) has people at the top who don’t recognize the importance of a newsletter and deep-down don’t really want to see such an effort succeed. Indeed, they, together with the accountants (bean counters) are usually too shortsighted to visualize the potential future profits to be derived from a comparatively modest investment in the present.

The elder Kiplinger, of newsletter fame, once told me that when he started his first newsletter he lost money for the first three years. He kept borrowing money to keep it going – not from financial institutions, who all thought he was crazy to throw good money after bad, but from personal friends and relatives who had faith in him. In the fourth and fifth years he broke even. After that, he took off like a rocket.

Today, the Kiplinger line of publications takes in around a half billion – repeat a HALF BILLION – dollars a year. I don’t know how many, certainly more than a dozen, medical institutions around the country now publish newsletters. I have personally spoken to the people who work on three of them, and all three tell me the same thing – that it takes three to five years to reach the break-even point, but that it’s worth waiting for, because now they’re all making money, which allows their organizations to expand their medical efforts and do some things they could otherwise not afford to do. In every case, they had to fight off the accountants who are seemingly incapable of looking beyond the first two years to see profits five years down the road.

They also all agree that it’s not just the investment in the publication itself that’s important. It’s the investment in publicity and in marketing that gets the results, because the best newsletter in the world won’t make money unless a major effort goes into marketing it and selling subscriptions. I would bet a bundle that if the powers that be at GW Medical Center got behind your newsletter with a reasonable investment in publicity and marketing, they would wind up with a profitable enterprise just a few years down the road. I say this because I firmly believe that in terms of product, in terms of the usefulness and timeliness of the information contained in your newsletter, and in view of the importance of cholesterol knowledge penetrating the public consciousness, you have a winning combination.

I hope you won’t let this experience discourage you from trying again someday. And, by the way, I don’t want any money back on my subscription. Use it for something worthwhile.

With all best wishes,
Harry Zubkoff

I’m finally getting around to writing, now that the great Jubilee is a distant memory. So let’s talk about the publishing business. I believe there’s a lot of money to be made in this business, and it almost doesn’t matter what you publish, so long as you do it wisely. If you look at the book shelves in every bookstore, you’ll see all kinds of garbage. For every decent book, there are several dozen that are not worth the paper they’re printed on, but people buy them because they have attractive covers.

So, the first thing you need is the ability to design a cover. The next thing is the ability to write an appealing blurb on the back cover to attract the reader; it need have little bearing on the contents of the book. It’s just a hook. And then, of course, you need maybe 60,000 to 80,000 words to fill up the middle. Put a small ad in a writer’s magazine and you’ll get plenty of manuscripts in the mail. Fiction, non-fiction, whatever you want. How-to books, religious books, humorous books, gruesome books, occult books, who-dun-its, sci-fi – anything you want. What’s more, you can print these things in paperbacks very cheaply, and you can sell them for $2.95 or $3.95, half the price of the big paperback publishers, and still make money.

Even 30 years ago, when you were fresh out of school (Good Lord, was it really that long ago?) you had a talent for editing, and by now you should be very good at it. All you really need to make money is the capital to invest; and you can start small and build it up faster than you think. Then there’s the way my publisher did it. He hired three hacks (that’s three old pros like me) to write a coffee-table book, with plenty of pictures to accompany the text, he paid us a flat fee (no royalties) to provide him with camera-ready copy on computer discs, and he hired a distribution firm to sell the books in advance, based on a description of the planned contents and the reputations of the three authors. (I think the distributor did not do a good job, but that’s another story.) I really don’t know how much he made on the deal, but I’m positive that he made a tidy profit.

Anyway, you could do the same thing, only better with a crackerjack salesman. There are dozens of guys like me around who would participate in this kind of a project for a modest fee. And there are plenty of topics that are ideal for this kind of book – for example, the 50th anniversary of the U.S. Air Force, coming up in September 1997; the 100th anniversary of powered flight, in December 2003; the 30th anniversary of the first landing on the moon coming up in 1999; and many others, as well. There are plenty of non-military related subjects, too. Put your mind to it and you can think of dozens; brainstorm it and you’re sure to come up with a few winners.

This copy of my book is the last extra copy I have, so consider it on loan to you. Keep it as long as you like, but I’d appreciate getting it back some day. After you look at it, and whenever you’re ready, I’d be happy to get together with you if you want to talk or kick some ideas around.

With all best wishes,
HZ

You can find Harry’s book on Amazon: