Harry’s unweathered essays on the media 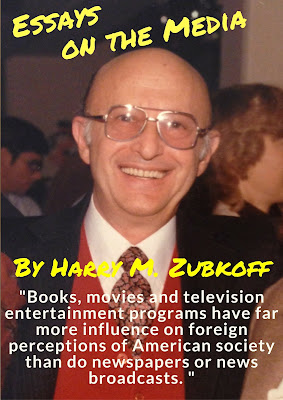 In 1987, Harry drafted the following essay about the media, one of many he eventually filed in a computer folder titled “BOOK 1”. Yes, he had considered the idea of writing a book on media after he retired from government. The essays could serve as a history lesson for youngsters and others who could use the background. For sure, they show us more of the knowledge that occupied Harry’s mind.

I have a great deal to say about the media, but before I start, let me define the term. The media is something like the weather – everyone talks about it but nobody ever does anything about it. And when people talk about the media, they all mean different things; that is, they are talking about different elements of the media. Media itself is an all-embracing term. It includes newspapers, magazines, books, radio broadcasts, television broadcasts, newsletters, house organs, press releases, etc.

Within both radio and television broadcasting, there are the major networks, the independents (so-called), cable, and local stations. All are part of the same general species, but all differ from each other in many important ways. The same is true of magazines – general magazines, popular magazines, trade magazines, special interest magazines, and so on. There is, in fact, such a wild proliferation of published and broadcast material available to the public that it is very nearly impossible to catalogue and assess it all under the heading of “media”.

Books, for example, are a very important element of the media, since they exercise considerable influence over the way their readers view the world around them. Movies, too. If anyone thinks, for example, that people in other countries derive their impressions of life in the United States from newspapers alone, he is badly mistaken. Books, movies and television entertainment programs have far more influence on foreign perceptions of American society than do newspapers or news broadcasts. I can’t prove that, but I strongly believe it.

In any case, the entire spectrum of material embraced by the “media” is too huge to be manageable in any one volume like this. On a practical level, therefore, when I talk about the media, I am talking only about a few of its more important (in my view) elements; that is, a few newspapers, a few magazines, a few broadcasts – a small fraction of the whole, and yet enough, I hope, to convey the reasons why I feel as I do about media performance and its effect on our national perceptions.

Now a few words about where I’m coming from. For some 36 years I was intimately associated with a Pentagon publication called the Current News, a series of daily compilations of newspaper and magazine stories dealing with national security affairs. This sort of experience does not qualify me as a journalist, per se, but rather as a serious reader, or student, of journalistic efforts. I would submit that anyone of moderate intelligence who studies the products of journalism in any field of interest attentively for more than three decades will inevitably learn something – not only about the field of interest, but also about the practice of journalism itself. If he has a modicum of self-respect, he will also think about what he has learned. And if he has an ego, as I do, he will try to impart what he has learned to others, as I am in this book.