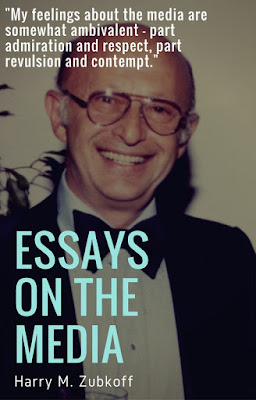 Here’s “Chapter 2” from a folder of drafts Harry filed on his computer in the 1980s and ’90s. At the time, he’d thought about writing a book on the media. We can only imagine things he would have had to say about the media today.

Here’s a question I’m often asked, sometimes at cocktail parties, sometimes in serious conversations or discussions. “Harry, after reading so widely for so many years, how do you feel about the media? Are they doing a good job?”

I wish the answers could be as simple as the questions, but they’re not. My feelings about the media are somewhat ambivalent – part admiration and respect, part revulsion and contempt. I’m reminded of what Winston Churchill once said about democracy. “Democracy,” he said, “is the worst form of government imaginable – except for all the others.” Or words to that effect. He had a way of spouting nuggets like that.

Meteorologists like to say that there is no such thing as bad weather – only different kinds of weather. In a way, the same thing can be said about newspapers. None of them are all good; none of them are all bad. They are all a mixture of good and bad which, in effect, makes each one different. The National Inquirer, for example, is as different from The New York Times as the sun is from the moon. Yet, they are both newspapers, just as the sun and the moon are both heavenly bodies in our solar system. One can be described as an abomination in the media world, the other as a great purveyor of information and influence. (I leave it to you to decide which is which.) But both have their moments of greatness, and both have their moments of failure. The point is that they are very different breeds of the same cat, and the people who read them do so for different reasons. The one, perhaps, to keep up with their prejudices; the other, perhaps, to be entertained or informed. (Again, I leave it to you to decide which is which.)

The commentator represents the top of the heap in a system that puts the ordinary reporter at the bottom. This is the “Peter Principle” at work. When a reporter displays the qualities of persistence, astuteness, acumen, etc., that make him first-rate at what he does, he is rewarded by being taken out of that field and placed in the category of pundit, or commentator. This move immediately escalates his pay schedule to astronomical proportions, and this applies both to newspapers and broadcast journalism.

But what do such pundits do to earn their high salaries? They become, in effect, parasites, feeding off the work of other journalists. They either rewrite the news that others have gathered, adding their own comments (read biases) or they have teams of writers do it for them. On a newspaper, it would be tantamount to having the rewrite man elevated to a position equal to that of the editor, with commensurate salary and prestige, and putting his own byline on all the stories.

I strongly believe that this is what has happened to many of the syndicated columnists. They have, in accordance with the Peter Principle, been elevated to the level of incompetence. Strictly as an aside, I might add, I suspect that the same sort of thing has happened in our educational system. Those who have demonstrated the highest ability as educators have been elevated to administration, the level of incompetence for them, and our educational system has suffered accordingly.

In any case, reporters must be frustrated by the so-called star system, especially in television. More often than not, a reporter – a foreign correspondent – will gather the facts of an important story from some very high-level sources overseas; but does he get to tell his story to the viewers? Usually not. Dan Rather, or Tom Brokaw, or the current reigning star (read anchorman) will tell it, on whatever network or channel you’re watching.

Television is an enormously influential medium in our country and, probably, around the world. Or so they say. Indeed, it has become somewhat of a cliché to say that the majority of the people get their news from television and, thus, television shapes the public’s perceptions of the world around them. Well, it does and it doesn’t. The problem is that there is no accurate way to measure precisely how influential it really is. In my view, its influence is a myth perpetuated by the broadcasters and the agencies that sell advertising.

To be sure, millions of people watch the news, and millions more watch major events – football games, the World Series, the Olympics, Presidential news conferences, national tragedies, etc. – and there is no better medium for conveying a sense of what is happening now, right now, live and in living color. But the day-to-day news, the nightly news programs, are watched by fewer people than watch the major event shows or the major entertainment shows. And while they get some feel for what’s going on in the world or in their local communities, anyway, the question is, do they get a real understanding of what is transpiring?

(Stay tuned for more of Harry’s media-related drafts on this blog.)