Freedom of the press – and your private thoughts 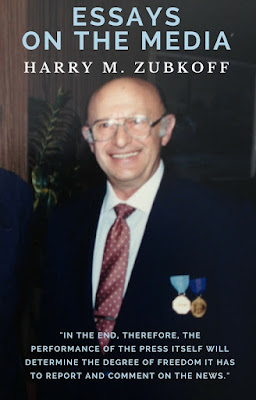 Recent hype about “fake news” and blocking the press make this essay as relevant as ever. Harry wrote it in 1991 and eventually filed it on his computer in a folder he titled “BOOK 1”. I believe he collected essays for a potential book on the media.


Freedom of the Press

The United States is the only country in the world that grants its people freedom of the press. This freedom is specifically spelled out in the First Amendment to the Constitution, under which nobody – not the Congress nor the states and especially not the courts – can take that freedom away. All of them have tried from time to time with varying degrees of success, but this unique and most precious freedom of ours remains largely intact, despite the fact that it is constantly under attack. These attacks, however, do not represent the greatest threat to freedom of the press.

The greatest danger, in my view, comes from the press itself. It is the performance of the press that poses the danger. The problem is that the press is comprised of a huge variety of publications, a publishing output that is so huge, in fact, that it cannot be encompassed in one glance. The newspapers, the magazines, the newsletters, the pamphlets, the books, the studies, the circulars, etc., etc.; all the many thousands of publications that confront the reading public, are the press. And some of those publications are undoubtedly scurrilous, scandalous, abusive, vulgar, obscene, gross, insulting, malignant, libelous, and any other descriptive adjective you can think of.

In the eyes of the courts, any individual element of the press is equal to any other element. That is to say that the National Inquirer, say, and The New York Times, say, are both newspapers, subject to the same rules of conduct as can be applied to all elements of the press alike. It may be blasphemous to mention those two publications in the same breath, but they are both newspapers and every time the former gets sued, the latter also suffers. In fact, every time any newspaper loses a court case, all the other newspapers lose a piece of their freedom.

The real strength of the press lays not so much in the guarantee of freedom provided in the Constitution as it does in the credibility it enjoys in the eyes of its readers. Thus, if one newspaper prints lies and distortions which bring about lawsuits and court proceedings, the notion that all newspapers are guilty of the same kind of conduct pervades the public consciousness. There is no way to separate the performance of one newspaper from that of another in the courts or in the public mind. It doesn’t even matter if a newspaper wins or loses in court. The mere allegations of malice and lies that are aired in court impinge on the public perception of newspaper conduct. And the more that the public comes to believe that the performance of the press is not worth protecting, the less freedom the press will enjoy.

In the end, therefore, the performance of the press itself will determine the degree of freedom it has to report and comment on the news. I don’t know if there is any solution to this problem of separating the various elements of the press, but it worries me.

My dad’s musings from 1994 seem to give us permission to share his writings, however personal. What do you think? He saved this with other essays on the media.

I have mixed emotions about a journal – for myself, that is. I have, on a few occasions, kept a journal with respect to a specific event or act in which I was involved on a daily basis, or a periodic basis. I tried to record all my actions and reactions to that subject over the time that it lasted. This worked only moderately well. So long as I continued to record events as they transpired, I was okay. But then, I started to record my feelings about these events, my emotions and reactions to them, my thinking and my decision-making processes, and inevitably, I got bogged down. I found myself trying to write a book every night, and it started to overwhelm me.

If I confined myself to what I did, what others did, and what I did in response to what they did, it worked and, in fact, became a useful resource for me. But, like I said, when I tried to record too much, it did not work.

Everybody has to work things out for himself (or herself), and a journal may very well work for you no matter how much you try to pour into it. So, consider this: Someday you’re going to be famous, and the biographers and historians will study everything you ever wrote in order to define and redefine your character. In that light, think of your journal as a public document that will disclose your most private thoughts and feelings. And act, or write, accordingly.