A lesson in listening to the news

Harry wrote the essay on this page in 1988 and later filed it in a folder titled “BOOK 1” with others recently posted on this blog. He may have written it solely for a book he thought about writing, or for another reason, such as a magazine article or a speech to a local organization. His friends and family who read this blog are glad he did a great deal of writing through his old age, and then mastered the computer enough to save at least some of his files for posterity.

There’s an old doggerel about a boy’s relationship with a girl. I don’t know who wrote it, most likely someone named “Anonymous”, but it goes like this:  I took her to the movies, I took her to a show, I took her almost every place, A boy and girl could go. I took her out to dinner, I took her out for tea, When suddenly I realized, That she’d been taking me! 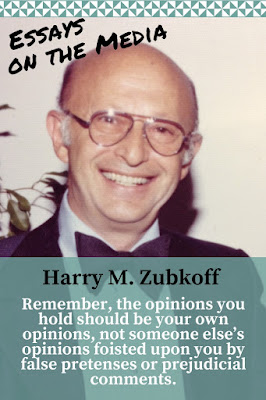 I used to wonder why the network news programs refused to take editorial positions on issues of national interest. Some local stations editorialize, usually on local issues rather than national issues. Some even provide time for listener responses to their editorials. But not the networks. At least, not formally. And then, suddenly, I realized that they’d been taking me, that they actually were editorializing.

You don’t have to label an editorial as such. There are much more subtle ways to editorialize. There are much more stealthy ways to express opinions. And the networks do that all the time, either consciously and deliberately, or subconsciously and unknowingly. They do it in their news reports and they do it in the so-called commentaries by their elder statesmen pundits. And, they do it under the guise of “objective” reporting or observations.

In that way, their support for, or their opposition to a particular policy or program slips through. Either their cheer-leading or their cursory treatment on specific issues colors the public perception and influences the public opinion. The birds do it; the bees do it; the anchormen, producers and reporters do it. How do they do it? In countless ways. They do it with a raised eyebrow, with a thin-lipped smile, with a repressed sneer, with a skeptical tone of voice, with an enthusiastic demeanor, with heightened excitement, with evident boredom, and, above all, with the selective use of prejudicial words.

Prejudicial words are especially effective in influencing the listener’s perception of events. Consider, for example, the following scenario:  An alleged criminal is on trial. The reporter notes that “today the prosecutor introduced damaging, new evidence.” The word “damaging” is itself enough to color the perception of the listener. He is immediately prejudiced against the defendant. Suppose the reporter had noted that “today the prosecutor introduced evidence that he hoped would damage the defendant’s case.” Immediately, the listener gains a different perception, that there is an element of doubt here.

The selection of words is crucial to the listener’s understanding of the reporter’s bias. The next time you listen to a network news program, pay close attention to the words the anchorman or the reporter uses, as well as to his tone of voice and his facial expressions. Then, decide for yourself if he’s trying to influence your perception of the events on which he is commenting. Decide for yourself if he’s being objective or prejudicial. Just keep an open mind about the issue at hand. Remember, the opinions you hold should be your own opinions, not someone else’s opinions foisted upon you by false pretenses or prejudicial comments.