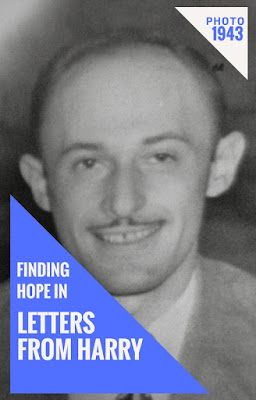 Continuing a wave of letters I’ve discovered in Harry’s computer files, here are two brief ones he wrote in the 1990s. I originally rejected them for this blog; you see, they are just ordinary, friendly letters – one to a former office colleague, the other to a writer at The Washington Post. I changed my mind about sharing them because, on second glance, they inspired me with thoughts that we are all ambassadors of hope simply by showing kindness and understanding to others. Plus, I took a moment to look up the article he was talking about in the second letter.

Alice Price gave me your address and told me you will soon hit a major milestone – your 80th birthday. So here’s a happy birthday wish a couple weeks in advance. When you blow out the candle(s) on your cake, may your fondest wish come true. Jeanette and I passed a milestone in August – our fiftieth anniversary. In this day and age, when the statisticians tell us that fully half of all marriages now end in divorce, that is looked upon as an aberration. It just isn’t fashionable any more, they say, to stay married to the same person for fifty years. How little they know! Actually, it still seems incredible to me that we were married fifty years ago, in August 1943, in the middle of the war. How fast these years have flown!

I suppose the young people in every generation think they are living through troubled times, but it seems to me that no generation faced more uncertainty about the future than ours did. And yet, despite the war, I think the whole country was optimistic about the future. We knew that somehow our country would survive and become stronger and better – and it did. So we – all of us – have much to be thankful for. Of course, like everyone our age, we have some health problems, but we still continue to enjoy life with all its heartaches and challenges. And we still have faith that this great country will somehow muddle through and continue to get better and, having been around since Woodrow Wilson was President, I don’t think it matters one little bit who the President may be at any given time.

Anyway, Dottie, we saw some tough times and some good times during our years together in the Pentagon, and looking back on them, it seems that I remember more clearly only the good times, and you were a part of all of them.

I just want to tell you how much I enjoy reading your columns in the Post, no matter what subject you choose to write about. (Or, as Winston Churchill would have it, no matter what subject about which you choose to write.) This letter is long overdue, since I have enjoyed your columns for a long time. It was yesterday’s column, however, (3/16/94) on “Laughter in the Movie House”, that finally triggered me to act. I find your columns usually loaded with background information on the subject at hand, invariably thoughtful, exquisitely worded, and always provocative.

Strangely, it sometimes seems to me that I detect the same facility for language, the same gift for phrasing and a similar trend of opinion and commentary in two of your colleagues, Meg Greenfield and Lally Weymouth. Either you are all sisters under the skin or there is a particularly skillful editor at work here. Whatever the case, all three of you seem to echo my own thoughts frequently and much more elegantly than I could express them myself. So thank you, thanks to all of you, for being there and for making the Post always worth reading.


September in History – Things we should know and remember

Also on my blog chopping block was this musing, last edited by Harry on July 29, 2009. It’s one of many notes he saved on quite a variety of topics.

On September 30, 1946, the International Tribunal at Nuremberg handed down its verdicts in the war crimes trials. (I was there.) The Nazi Leadership Corps, the SS (Schutzsaffel), the Security Police and the Gestapo were declared criminal organizations and their leaders were placed on an automatic arrest list. The Tribunal adopted the historic principle that one who has committed criminal acts may not take refuge in superior orders nor in the doctrine that the crimes were acts of the state.

This quote by Judge Dan Haywood (Spencer Tracy) in JUDGMENT AT NUREMBERG, one of the greatest movies of our times, is worth repeating and remembering.

“This trial has shown that ordinary men can delude themselves into the commission of crimes and atrocities so vast and heinous as to stagger the imagination. There are those in our country, America, today who speak of the protection of the country. Of survival. The answer to that is:  Survival of what? A country is what it stands for when standing for something is the most difficult. Before the world, let it now be noted here that this is what we stand for: Justice, truth, and the value of a single human being.”