A personal update to friends everywhere 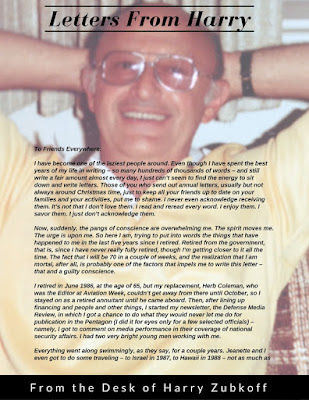 When my dad was about to turn 70, he wrote the following letter to a number of his friends. He gave typical updates on his life, probably of little interest to people who didn’t know him; however, it will fill in gaps for those who did. If you like Harry’s writing style, it’ll entertain you. And, it might encourage you to write a letter or email to old friends. Or, make a phone call.

I have become one of the laziest people around. Even though I have spent the best years of my life in writing – so many hundreds of thousands of words – and still write a fair amount almost every day, I just can’t seem to find the energy to sit down and write letters. Those of you who send out annual letters, usually but not always around Christmas time, just to keep all your friends up to date on your families and your activities, put me to shame. I never even acknowledge receiving them. It’s not that I don’t love them. I read and reread every word. I enjoy them. I savor them. I just don’t acknowledge them.

Now, suddenly, the pangs of conscience are overwhelming me. The spirit moves me. The urge is upon me. So here I am, trying to put into words the things that have happened to me in the last five years since I retired. Retired from the government, that is, since I have never really fully retired, though I’m getting closer to it all the time. The fact that I will be 70 in a couple of weeks, and the realization that I am mortal, after all, is probably one of the factors that impels me to write this letter – that and a guilty conscience.

I retired in June 1986, at the age of 65, but my replacement, Herb Coleman, who was the Editor at Aviation Week, couldn’t get away from there until October, so I stayed on as a retired annuitant until he came aboard. Then, after lining up financing and people and other things, I started my newsletter, the Defense Media Review, in which I got a chance to do what they would never let me do for publication in the Pentagon (I did it for eyes only for a few selected officials) – namely, I got to comment on media performance in their coverage of national security affairs. I had two very bright young men working with me.

Everything went along swimmingly, as they say, for a couple years. Jeanette and I even got to do some traveling – to Israel in 1987, to Hawaii in 1988 – not as much as she wanted to do, but I still had commitments and deadlines. Then, on August 30, 1988, the day after we got back from a month’s vacation, two weeks in Hawaii and two weeks doing California, I had a heart attack. Well, not exactly a heart attack. It was diagnosed as severe angina, which, technically speaking is a warning signal that a heart attack may be imminent, and you better do something about it.

After an angiogram, which determined that one of the main arteries going to the heart was 90 percent blocked, they decided to do the angioplasty procedure, rather than a bypass operation. In the angioplasty procedure, they simply insert a “balloon” into the artery and press the blockage (cholesterol) against the wall of the artery, thereby clearing the passageway for the flow of blood to the heart. It’s much simpler and easier than a bypass, but it’s not feasible for everyone; it depends on exactly where the blockage is. There is no guarantee, of course, that the blockage will not return. Mine did, some six months or so later. That was in March 1989, just after we got back from a cruise in the Caribbean (six islands in eight days).

I keep telling Jeanette that traveling can be hazardous to your health. So I got a second angioplasty and, according to the prevailing medical view, the odds are that the second one will last much longer. It’s now a little more than two years later, and it’s still holding, so maybe the doctors are right. Of course, an important element in recovering and staying healthy is exercise – aerobic exercise, to be precise. And, it goes without saying, I really don’t do enough of that.

By the way, an important factor in bringing on heart problems in the first place is smoking. And everybody knows that I smoked too much. In fact, from the time I was fifteen years old until the time I was sixty seven, well over fifty years, I smoked – two to three packs a day. Not only did it help bring about the coronary problem, it also did irreparable damage to my lungs. Looking back on it, it’s hard for me to believe that I was so dumb for so long. Knowing what we know now, it’s idiotic for smokers to continue smoking and it’s moronic for young people to start smoking. Anyway, I quit on August 30, 1988, in the ambulance on the way to the hospital, and, though I still miss it now and then, I have no real desire to start again.

By the end of 1988, the newsletter was becoming a burden that I didn’t want to carry too much longer. As it happens, shortly after I retired from the government, the College of Communication at Boston University established a Center for Defense Journalism and the Dean of the College invited me to serve on their Advisory Board. He also wanted the Center to start producing a newsletter. What he had in mind was very much like the one I was already producing – a commentary on media coverage of defense matters. So, for a very modest sum that did not involve a profit for me, I sold the newsletter to Boston University. It is now the flagship publication of the Center for Defense Journalism, and I am listed as a Contributing Editor, which means that I write an article now and then for them, and give them some ideas on what I think they ought to write about – all for free, of course.

For money I’ve been doing some free-lance writing and a little consulting for people who want to start newsletters or newspapers. I’m also trying to get into the fiction field, short stories mostly. The trouble is that I’m not hungry enough, as they say in the trade, which means that the motivation to try hard is lacking. Fortunately, you see, my government pension is quite generous, after almost 40 years of service (including Army time in WWII).

Last year I started taking some courses at the University of Maryland. One of the advantages of being over 65 is that you can go to school free here. One course in particular sounded intriguing – a course in modern military history, which starts in 1494 and extends to the present time. I found it fascinating and exciting. Also, humbling. There is so much I don’t know. As it happens, the professor used to work in the Army Historian’s office, and we knew each other slightly. I was truly impressed with the depth and range of knowledge he displayed.

When we got to the WWII era, about which I thought I knew a lot, I displayed my ignorance on occasion. He was very patient with me. Of course, most of the other students didn’t realize how truly ignorant I was. They thought that just because I was there that I knew more than I did. So, like the old saying goes, it’s better to keep your mouth shut and be thought a fool than to open it and remove all doubt. I tried to keep my mouth shut most of the time. One thing, though, that really impressed those young people, an attitude that was expressed very well by one when he said:  “You fought in World War II? Wow! My grandfather fought in World War II.”

Nowadays, when I’m out walking with my grandchildren, the young pretty girls never mistake me for their father. It used to be easy to start a conversation with them in the presence of the children, but now they got me pegged. “You must be the grandfather,” they say. I can’t imagine why, since I look as young and handsome as I always did.

That’s about all there is to the continuing story of my life. I’m now tapering off the work ethic and beginning to enjoy the retired life, especially the ability to yield to sudden impulses to take off and go where we want or do what we want.

With love and best wishes to all of you,
HZ