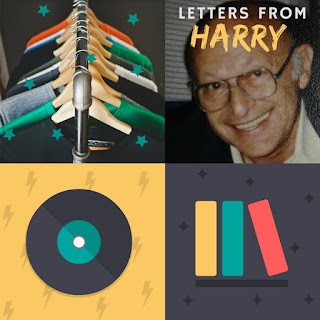 While preparing today’s blog post, I happen to pick up an AARP “Bulletin” newspaper with an article titled “How to Complain”. It suggests we can post our complaint on Twitter. On Twitter and other social media a complaint can “go viral”, and the company – whose products or services disappointed us – can see it, too. The other way of writing a complaint – much longer than 140 characters – was right up Harry’s alley, as I discovered in his computer files. I would think he enjoyed voicing his opinions, analyzing the situations, and even offering possible solutions for each complaint. Plus, he wouldn’t stand to let the companies take advantage of him. See if you can relate to any of these.

Over the past years, I have bought a great many things from Reader’s Digest, including at least two dozen or more record albums. Until now I have never had a really serious complaint; minor complaints are not worth communicating to you.

Recently, I bought the record album entitled “I’ve Heard That Song Before”. Partly because I was traveling and partly because I was extremely busy with some writing projects, I did not open the box until several weeks after it arrived. When I finally did so, I discovered, to my horror, an album that looked very much like it had been used in a lending library for two years before they threw it into the trash, where the Reader’s Digest crew found it and sent it to me.

The album cover had been torn and crudely repaired with scotch tape, though it still gaped at the seams; the seven records were not in their proper casings, that is, record number 1 was in casing number 7, record number 2 was in casing number 5, and so forth – not a single one was in the right number casing; the condition of the records themselves was terrible, with oily fingerprints dried on all the records and scratches on some of them.

It is positively sacrilegious to treat records so shabbily. I spent almost two hours with a special brush and record cleaning fluid, trying to restore those records to usable condition. And if you ask why I bothered or why I just simply didn’t return the album, the answer is that it was long past the seven-day tryout period, and besides, it’s a real hassle to mail something back.

In any case, for the most part I’ve been happy with the Reader’s Digest albums. They have given me many, many hours of enjoyable listening. One bad experience among a multitude of good experiences does not make you a villain, in my view. But, after reflection, it occurred to me that you would never learn about this incident unless you learned it from me, nor would you ever become aware of someone’s bad performance in your organization unless you received a complaint. As it is, if your bureaucracy is like most of the others, you may never see this letter, either. Someone in your outer office will very likely intercept it on the assumption that you should not be bothered with tiresome details like this. I guess I’ll be able to tell by the quality of the form letter I receive in response.

One of the albums I bought during this past year was one entitled “Memories of You”. It was a great disappointment to me. To begin with, there was no little booklet of background material on each of the numbers included in the album. Was that just an oversight, or was it because no booklet was prepared for this particular album? If there is a booklet, I’d like very much to get it.

With respect to the contents of the album, I don’t know what kind of feedback you get from your customers, but let me register this with you. Some of the best songs in this album were spoiled, in my opinion, by the particular recordings you selected for inclusion. I refer to the recordings by Franklyn MacCormack with Russ Garcia and his orchestra. One or two renditions of that kind would have been more than enough in a seven-record album; nine or ten were far too many for my tastes. I would much rather have heard someone sing the songs the way they were meant to be sung – not murmured with heavy breathing by someone with a stomach ache.

Your letter of September 28, 1993, is truly perplexing. Last month, your company sent me an “invitation” to purchase a selection of merchandise. There were no questions regarding my credit references, bank accounts, or charge accounts. I naturally assumed that you check the credit ratings beforehand on individuals to whom you send such invitations. In any case, as I understood it, you offered three payment options: to charge my purchase to a credit card, to accompany my order with a check, or to pay within seven days of receiving the merchandise. I chose the latter option.

Obviously, you have withdrawn that option. Let me make it clear that I will not furnish any of my credit card numbers to you, nor will I list my bank account numbers, nor will I pay in advance for anything “sight unseen”. Indeed, your letter sounds suspiciously like a scam to me and we, the trusting public, are constantly bombarded with such requests, as well as with warnings against revealing such information to anyone, no matter how legitimate they seem to be. It would be like giving someone a license to steal from you.

I did sign your order form which, in effect, was an agreement to pay for the merchandise within seven days, assuming it was satisfactory, or to return it if I found it unsatisfactory. I am still willing to abide by that agreement, but you, the seller, must establish your good faith with me, not the other way around. For all I know, you may be selling processed paper goods that would fall apart after one wearing, or, more likely, poorly sized garments that won’t fit properly.

I don’t understand. Indeed, I am completely baffled. Let’s review. I ordered a cordless electric screwdriver for $29.95. You sent me something else, along with a payment plan of some kind which would have wound up costing me either $39.95 or $44.00, I think. That’s just too much. I sent the merchandise back to you and told you to forget the whole thing. You acknowledged receipt of the merchandise, noting that it was not what I had ordered, and expressed the hope that we could do business again sometime in the future. You subsequently sent me additional advertising material. Now you are sending me another payment schedule, at a different price, for the same product, which I have not received and no longer want at the price you charge. This new payment plan says I must pay by 01-18-94, although I received it on 01-19-94 – that was yesterday.

Now then, one of us is mixed up. Am I missing something? Did I misunderstand? Have I entered into some kind of a binding contract that says I have to pay you for something I didn’t get and don’t want? Please clarify. My credit is important to me and I don’t want to jeopardize it over a misunderstanding or a miscommunication.

You are trying my patience. On 20 January 1994, I sent you a letter questioning your invoice, returning it together with your inflated payment plan, and cancelling my original order. A copy of that letter is enclosed to refresh your memory. You never responded to that letter. Instead, you now send me another bill for merchandise I did not receive and no longer want at the price you charge. I am returning your bill, with this letter, and ask that you clear up this matter quickly.

This letter will be as short and to the point as was your letter to me in which you invited me to take advantage of your “no-strings” offer to join your club. It is, indeed, a generous offer, and I was, for a moment, sorely tempted but, on reflection, I resisted that temptation and I’d like to tell you why.

The truth is that this is not a “no-strings” offer at all. True, I never have to buy another book from you, but every three weeks or so I have to decline to buy another book from you. I refer, of course, to the fact that if a member does not specifically instruct you not to send a book, you will automatically send your monthly selections. It is simply too much of a hassle to respond negatively to all your mailings. But I have a counter-offer for you. I’ll gladly join the club, but with the understanding that you’ll only send me books when I specifically request them, without the need to respond negatively to your frequent mailings.

Think of it for a minute. You would be pioneering a new way of doing business for book clubs. Not only would you not require your members to buy books, you would also not require your members not to buy books. You would be setting a precedent that every book club in the industry would have to emulate if they want to keep pace with the times. You would be inaugurating a new era in the book club industry and, in the process, you would find a grateful public responding to your appeal. In fact, I wouldn’t be at all surprised if your sales would increase dramatically, simply because you could attract far more members if you make it clear at the start that there is never a need to respond negatively if your members don’t want to receive your monthly selections.

I can see a whole new advertising campaign in the making if you adopt this one, simple principle. So, what do you say? Do you want to go boldly where no man has gone before? Do you want to open up a new and final frontier in the book club business?