Harry sounds off on government in letters to Post 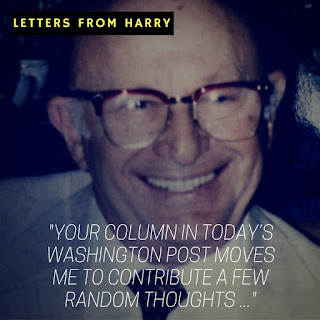 It stands to reason that retirees have more time to pursue other interests. In Harry’s case, he loved to express his opinions and share his knowledge through writing. So, if you thought you couldn’t learn any more about him, check out these letters I found to The Washington Post – two to journalist David Broder and one to the Editor. They reveal more bits of Harry’s background – and his views on government.

I have long admired your column, your writing and your thinking. You set the standard for political reporters or commentators to emulate throughout the world of journalism. Your column in this morning’s Washington Post (7/21/93) is a case in point. As you frequently do, you have hit precisely the right note in describing the Vice President’s efforts to institute a sea change in the way the government operates. A note of cautious optimism.

You note that some of the people helping Al Gore in this project are relatively young and inexperienced, with, presumably, inadequate understanding of how the government works or how to effect changes. I have often observed over the years just how these governmental study programs get their staffs. I worked in the Pentagon for 36 years, the last 25 of which was in a position of considerable responsibility. During those years, I witnessed countless commissions and blue ribbon panels established to study and improve the way the government operates. All of them were headed by distinguished individuals; all of them were staffed mainly by people assigned involuntarily by the various government agencies, or through personal contacts by young volunteers. The volunteers were invariably enthusiastic and uninformed. The assignees were usually people whom their respective agencies were happy to farm out. Almost all the studies thus produced were uninspired and deserved the chance to gather dust on hidden shelves.

What is true of all those study groups is that none of them ever seemed to tap the vast pool of talent represented by the recently retired career government employees. I am talking about the middle management people who rose to their positions through the ranks, so to speak, who know and understand the intricacies of federal organizational arrangements, who know where the levers are and where the roadblocks are, and who know when to move them and when to circumvent them.

Don’t misunderstand. I am not volunteering my services, but I personally know dozens of retirees from the middle management levels of the government who could make a truly constructive contribution to Al Gore’s study effort. And I’m sure there are hundreds, perhaps thousands, more who would happily place their knowledge and experience at the Vice President’s disposal. In all probability, OPM [Office of Personnel Management] could surely give Mr. Gore a short list of outstanding recently retired individuals from each of the federal agencies, from among whom he could choose a few who could bring their accumulated wisdom to bear on the problems being studied. If you think this suggestion is worthy, you might mention it to Mr. Gore or one of his key people. (No need to credit me.)

All that aside, I want to thank you for all those great columns you produce, for the depth and the breadth of the information you impart to your readers, and for the pleasure you give this reader by the quality of your writing.

Your column in today’s Washington Post moves me to contribute a few random thoughts about the workings of government and the bureaucracy. It is no wonder that the public has a negative view of government, considering the following factors:

1.  Every presidential candidate in recent memory has run for office against the government. It has become fashionable to badmouth the government and the bureaucracy, and every time a candidate says something negative, the press multiplies it a hundred-fold. No matter how well the government operates, the public will not believe it so long as politicians continue to deride it.

2.  The professional civil service, which is to say the bureaucracy, operates at a severe disadvantage. The problem is that every President appoints people to the top positions in all the agencies, and these people are answerable only to the President. Now, here’s the rub. The kinds of people who are appointed to the statutory positions are chosen not on the basis of their professional qualifications for the job, but rather on the basis of their political qualifications. In fact, many of them are completely unsuited for the jobs to which they are appointed, despite the scrutiny by the press and the Senate confirmation process. With few exceptions, they are either campaign workers being rewarded with government jobs, financial supporters being rewarded with government jobs, representatives of industries that do business with the agencies involved, political and/or personal cronies, and an assortment of hangers-on who take any job that’s offered.

Most of them enter into their jobs with an attitude of unrelenting hostility to the professional civil service. Very few of them, very few, try to work with their staffs of professionals or make a serious attempt to understand the peculiarities or intricacies of government operations. Instead, they staff their second- and third-tier ranks with pals and cronies, and they try in every way imaginable to circumvent the bureaucracy in order to do things that their agencies should not do, or to prevent their agencies from doing things that they should do.

Rarely do their illegal or unethical activities get public scrutiny, mainly because the press is always too busy scrutinizing the President instead of looking into the less-glamorous conduct of lower-level appointees in the agencies. And, also because the press seldom talks to the professional civil servants who, in any case, are seldom willing to blow the whistle on the statutory appointees. Only occasionally are some of them exposed, either through a Justice Dept. investigation or a congressional investigation, and in those instances, the resultant press coverage solidifies the public perception of the “bureaucracy” as a den of thieves. Most of them are never exposed, either for the “shady” things they do, or for the ineptness of their conduct in office. Still, what they do makes their agencies look bad and you, by which I mean the press, really ought to differentiate between the civil service bureaucracy and the statutory bureaucracy.

3.  As I said in my letter to you last July, I want to thank you for the all the great columns you produce and for the pleasure you give me by virtue of the quality of your writing.

To the Editor, The Washington Post
Regarding Rule XXII

The articles by Lloyd Cutler, George Will, Howard Baker and Norman Ornstein (today) all miss the mark, though the discussion itself is fascinating. The fact is, however, they all start with the assumption that the United States Senate is genuinely willing to act in the best interests of the country, and that the current policy on filibusters thwart this purpose. In my view, and I honestly believe a great many Americans share this view, nothing could be farther from the truth. If anyone still believes that the Senate is interested in the good of the country or the welfare of the people, I have a bridge in Brooklyn for sale at a bargain price.

The Senate has displayed time and time again its complete indifference to the best interests of the country. Individual Senators, Bob Dole included, are interested in their own self-aggrandizement and their own reelection first. Secondly, and a far second indeed, they pretend to work on behalf of their own constituents. In that respect, they put up a good front, but it’s all for show, not for real. I do not believe the good of the country enters their considerations at all. All their pious mouthings about their concerns for the welfare of the American “middle class” are sickening, especially coming from Republicans, who did as much as they could during the twelve years when they owned the White House, to eliminate the middle class. And those Senators who point with pride to their years of “public” service are hoodwinking the public. Their service was performed for private or special interests, not for the public.

If the Senate as a body were genuinely concerned with the best interests of the nation, it would find a way to cope with the filibusters that thwart the public interest. Until it does, until it demonstrates a greater degree of active concern for the country, it will continue to be regarded by many of us voters as a joke.