On an afternoon in 2012, I was having lunch with my parents at Nancy’s Kitchen near their retirement community, Leisure World in Silver Spring, MD. My 91-year-old dad asked, “Do you hear the music they’re playing? I gave them a box of CDs and they play them all the time.” And then a manager called out,“Hi Harry!” That was my dad; he recorded music on CDs and shared them far and wide. He knew the restaurant patrons would enjoy them. Here are two stories Harry wrote for his community newsletter.

Some songs evoke memories – of people, or events, or special occasions. As soon as you hear it, a memory clicks into place. This is one of those songs. You don’t hear this one at all these days, but I’ll bet the very thought of it will call forth a memory in your mind. It was written by Sammy Fain, with lyric by Lew Brown. A word about the writers.

Sammy Fain (his real name was Samuel Feinberg) was born in New York in 1902, and died in 1989 at the age of 87. He was a prolific composer who worked mainly in collaboration with Irving Kahal, though he worked with many others on an occasional basis. With Kahal he wrote “Let a Smile Be Your Umbrella”, among other hits. He taught himself to play the piano and, though he played by ear, as they say, he became good enough to give an occasional concert for friends. Sammy Fain composed the music for more than two dozen films from the 1930s through the 1950s and was nominated for the Best Original Song Academy Award nine times. He won that Oscar twice, in 1954 for “Secret Love” from the movie “Calamity Jane”, and in 1955 for “Love Is a Many Splendored Thing” from the movie of the same name. The lyrics for both songs were written by Paul Francis Webster, with whom he worked quite frequently. He was inducted into the Songwriters Hall of Fame in 1962.

Lew Brown (his real name was Louis Brownstein) was also an old pro in the music business. He was born in 1893 in Russia and his family came to the U.S. when he was five. He grew up in the Bronx and died in 1958, at age 64. Brown was a member of the three-man team of Ray Henderson, Buddy DeSylva and Brown who, in the 1920s wrote dozens of popular songs in “Tin Pan Alley”. He also collaborated with many of the great song writers of that era including Harold Arlen and Albert Von Tilzer. He wrote lyrics for a number of Broadway shows, too, including “George White’s Scandals” and “Mr. Wonderful”.

This song was published in 1937 (one of the best years ever for popular music) and first appeared in the movie “Vogues of 1938”. It was an immediate hit. Throughout the late 1930s and early ’40s it was extremely popular. Then, in 1952, it was featured in a Susan Hayward movie “With a Song In My Heart”, the story of Jane Froman. Patti Page had a million-seller recording in 1955, and Frank Sinatra had another in 1960. In 1997 the title was used for a movie that starred Bette Midler and Dennis Farina and featured performances by Louis Armstrong and Oscar Peterson. Almost all of the great singing artists of our times have recorded it. 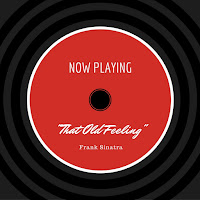 I saw you last night and got that old feeling,
When you came in sight I got that old feeling.
The moment that you danced by, I felt a thrill,
And when you caught my eye, my heart stood still.
Once again I seemed to feel that old yearning,
Then I knew the spark of love was still burning.
There’ll be no new romance for me; it’s foolish to start,
‘Cause that old feeling is still in my heart.

“I’ll Be Seeing You” was another one of the great songs written in 1937. This one, too, was written by Sammy Fain, who wrote last month’s song. The lyric for this one was written by Irving Kahal and it was used in a Broadway musical called “Right This Way” in 1938. It had everything going for it – successful composer and lyricist, a Broadway show to introduce it – and yet it did not impress the public. The show closed after only two weeks and the song sank without a trace; that is, until Bing Crosby recorded it in 1944 and it was featured in a movie of the same name that starred Ginger Rogers and Joseph Cotton. After that, it was used in countless movies and television shows and recorded by just about every recording artist of the 20th century.

In retrospect, it’s easy to understand. By 1944, millions of us were in war zones overseas and lovers everywhere looked forward to the day when they would see each other again. This song reflected the sentiment of separation and hope that all of us felt. There was a preamble to the words, too, very touching though not ordinarily included in most performances.

I’ll Be Seeing You (Lyric)

Cathedral Bells were tolling and our hearts sang on,
Was it the spell of Paris or the April dawn?
Who knows if we shall meet again?
But when the morning chimes ring sweet again.

I’ll be seeing you in all the old familiar places,
That this heart of mine embraces all day through.
In that small cafe, the park across the way,
The children’s carousel, the chestnut tree, the wishing well.
I’ll be seeing you in every lovely summer’s day,
In everything that’s light and gay,
I’ll always think of you that way.
I’ll find you in the morning sun,
And when the night is new,
I’ll be looking at the moon,
But I’ll be seeing you.