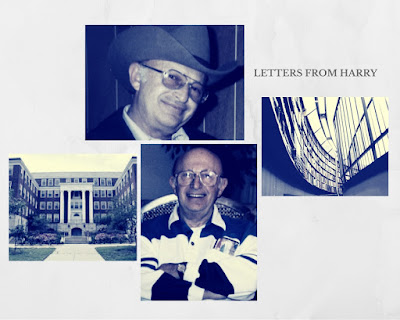 Through this blog, I hope that people who knew Harry are learning more about him and keeping him close to their hearts. This is why I share many of the personal emails and letters he wrote to friends and family. Now we can see that even letters he wrote to his professors at the University of Maryland, in the 1990s, add details to the story of his life. Here are five of those letters.

I had thought that you would have been told that I was auditing your course when the class began, but it dawned on me that you really didn’t know until you asked and I confirmed it. What that means, according to the instructions they give us when we senior citizens register, is that we should not add to your workload unnecessarily. For me, it means that I don’t volunteer my opinions or impose my biases in class discussions unless called upon – and I frequently have to bite my tongue to refrain from expressing an opinion. It also means that I don’t hand in a lot of papers for you to read and grade. You surely have enough of that to do without me.

It does not mean, however, that I do not take the class seriously. On the contrary, I find it extremely interesting and informative. I have done a great deal of writing over the years, all non-fiction articles, books and essays. Fiction, though, is difficult for me. Such things as motivation, dialogue, characterizations, etc., all the things that emerge in novels and short stories, elude me. You, in this short time since the semester began, have helped me immensely. You have started me thinking and writing about things I’ve not experienced before and I find it stimulating and enjoyable.

Anyway, I want you to know how much I appreciate the opportunity to audit your class, and I want to commend you on the outstanding manner in which you conduct it. It helps, of course, that you have some very bright young students who seem eager to learn, but you are doing a superb job of eliciting their participation, and their response to you is a reflection of your exemplary performance as a teacher.

I want to tell you how much I enjoyed your course, History 157: The United States From the Civil War to the Present, this past semester. Not only were you extremely informative in your presentations, your lectures were entertaining, as well. Of course, the period from the 1920s to the present is of special interest to me, since it coincides with my life span – so far. You shed new light and brought new perspectives to events in the American experience about which I have personal knowledge.

It is particularly illuminating to note that the great depression of the 1930s was preceded by a decade of Republican (mal) administration, just as the great deficits and recession of the 1990s was preceded by similarly disastrous Republican administrations. Is there a lesson for historians here? In my view, these past two and three quarters administrations have also set the civil rights movement back a generation or more, and not enough note has been taken of this sad development. In any case, I wanted to thank you for having made this a truly interesting and rewarding semester for me.

I just want to tell you how much I appreciate your course in Constitutional History. As a Golden ID student who is simply auditing this course rather than seeking credits, I find the subject material not only highly informative, but positively fascinating. The older I get, the more I realize how little I know, not just about historical events generally, but about events that have touched me personally and about the times in which I have lived. Take World War II, for example, during which I served in the Army in the European Theater and gained what I thought was a first-hand view of events. It was not until some years after the war, however, after reading a number of books and listening to countless lectures, that I came to some understanding of what that war was all about and the strategies and tactics that governed its conduct.

And so it is with respect to almost all the events I have lived through during the years since then. I have come to the realization that I have a worm’s eye view of history, looking at events from the bottom up, so to speak, while historians like yourself have a bird’s eye view, an overview of events that derives from a systematic study. I have an enormous respect for the depth of knowledge you consistently demonstrate in the classroom, but even more than that, for the manner in which you go about imparting that knowledge to your students, including myself.

And, in case you sometimes feel like the proverbial voice crying in the wilderness, let me assure you that many of the younger people in the class, the real students, are equally impressed. You are communicating to them. To me, especially, you are bringing new and refreshing perspectives to my understanding of the recent past. I am profoundly grateful for that.

I just wanted to tell you how much I enjoy your lectures. The reason I audit your course on the history of the U.S. from WWII to the present is to learn how a generation twice removed from mine perceives the times I lived through. It’s strange, very strange, to hear these bright young people discuss and evaluate those times and the events that shaped today’s world. In a way I have come to understand the despair that gripped my father’s generation when my friends and I discussed WW I with him and the events that he lived through.

When I talk about WWII today, which is very rare indeed, I find that many historians are little interested. (Historians, by the way, seem to have little interest in history, per se, only in devising new ways to interpret and define the past. All historians are revisionists – which is my generalization for today.) Anyway, I truly admire the way you present and describe events about which I have first-hand knowledge and the perspectives you bring and the pains you take not to allow your own opinions to come through too strongly.

Aside from my military service in WWII, I worked as a civilian in the Pentagon for nearly four decades. The nature of my work, both military and civilian, made it possible for me to meet many of the important figures of our times, which gave me a sort of worm’s eye view of events and policies. When you mentioned Milton Eisenhower in class last week, I was struck by my own recollections about him. You may recall that after the assassinations of Martin Luther King and Robert Kennedy, President Johnson appointed Milton Eisenhower to chair a Commission to study violence in American society. The Commission was supposed to complete its work in six months, but that was not possible. When Nixon became President, he extended the Commission twice, for six months each time.

My office in the Pentagon was deeply involved with Milton Eisenhower in that study for the entire year and a half, and during that time I came to the conclusion that Milton was far brighter and more talented than his younger brother. The fact that President Eisenhower is now slowly creeping up the ladder in the polls proves what I said about historians. They conveniently forget how bad he was. Every time he had a press conference, his press secretary had to go out to explain what the President meant to say – just like Reagan, who knew next to nothing about what was really going on.

Incidentally, I also knew Allen Dulles and was convinced that he was smarter and more talented than John Foster Dulles, who, in my view, was a terrible Secretary of State. I believe that many of the problems that beset the U.S. throughout the “Cold War” were in large measure attributable to his policies. This is especially true with regard to the Middle East. He practically gave Egypt to the Soviet Union and brought about a full generation of hostility to the U.S. among the Arab states that could have been avoided, with direct impact upon the prospects for peace between those states and Israel. He turned France away from NATO and he also completely destroyed any prospects for peace and stability in the Pacific after Eisenhower engineered a phony peace in Korea (that Korean war, though not many people realize it, is still going on, to this day) and then got us involved in France’s aborted colonial enterprise in Vietnam, from which we are only now beginning to emerge.

Ah well, I voted for Adlai Stevenson, twice, so I’m obviously not in step. But thank you for making life interesting for me.

As we approach the end of the semester, I want you to know how much I have enjoyed auditing your course on The Politics of the Presidency. As I pointed out when I asked your permission to attend, I have lived through most of the recent times discussed in class. My earliest recollection of political awareness was the race between Al Smith and Herbert Hoover in 1928. I grew up during the great depression of the1930s, and the first time I voted was in 1942 in the local and Congressional elections. The first time I voted for President was in 1944.

Aside from service in the Army during WWII, I worked for the government (Department of Defense in the Pentagon) from 1949 until I retired in 1986. During those years I met and spoke to every President from Truman to Reagan, all of the Secretaries of Defense and many of the Secretaries of State, participating in briefings on many occasions and participating in preparing the national security elements of Presidential speeches. In short, I was one of those backroom guys who helped prepare position papers, etc., and who had a worm’s eye view of many of the important events of our times and of the key policy makers who controlled and shaped those events.

Despite my experience, however, the overall view of history as presented by you provided the kind of perspective I never could have attained by myself. I especially admire your low-key and objective view of events, so unlike my own strongly held views and opinions. I have to bite my tongue to restrain from speaking out on so many things you discuss in class, for fear of imposing my own biases on these young students for whom Nixon and even Carter represent ancient history. I also admire your ability to elicit questions and discussions from those young students.

In any case, I want to thank you for having made this semester not only an informative experience, but an enjoyable one, as well.