The media and lies in the Middle East

When I read Harry’s old articles, my mind inevitably goes to our current events, and I imagine how he would feel today. In March 1991, he drafted a comment to a long-time journalist friend, titled “Whom Did We Fight?”, about the war in Iraq. A month later (and after several more essays on the subject), he wrote an article simply titled “Lies” in his computer files. Both reveal exactly how he felt at the time.

The notion that we were not at war with the Iraqi people, or that we never had anything against the Iraqi people but only against their government, seems to me patently absurd. The President and various members of the Administration, as well as members of the Congress, have said it on a number of occasions, though, on the face of it, it is neither true nor honest. It is repeated, I suspect, as a sop to the sensibilities of people who are not willing to countenance a war against any country but can accept the notion of a war against a nasty government. Certainly Saddam Hussein and company are as nasty as you can get, but how do you distinguish between a people and its government?

The fact is, we conducted a war against the people of Iraq, a people who by all accounts seemed fully supportive of Saddam Hussein and his policies. The people of Iraq cheered at the takeover of Kuwait. The people of Iraq, represented by their men in the uniform of their country, displayed an order of savagery and bestiality toward the people of Kuwait seldom seen in human affairs. All the television scenes showing the crowds of Iraqis (and Jordanians and Palestinians) demonstrating in support of Hussein cannot be dismissed as pure propaganda. They supported him, they loved him, and we fought a war against them and him.

Since he lost the war, some of his people have turned against him, but only some. If they all rose up against him he would be out by sundown. As it is, he continues to have enough support and enough power to remain in office. If he is thrown out, it is more likely to be by someone close to him, rather than by a popular uprising against him. And if he remains in power, we will continue to wage a war against the people of Iraq, even if it’s only an economic “sanction” war.

Let’s face it, the “government” of Iraq did not suffer as the people of Iraq suffered from this war. The people paid the price, not the leaders. If there are any lessons to be drawn from this war, one of them, for us, is surely this, that we cannot wage a war against an individual or a government alone – that all wars are waged against peoples. For the people of other countries that are governed by self-appointed despots, they should surely be thinking about exercising a greater measure of control over their governments, their policies and their destinies.

Saddam Hussein may or may not be another Adolf Hitler, but in at least one respect he has taken an important page from Hitler’s book: A lie, repeated often enough, no matter how big or how absurd, will eventually come to be accepted as truth. We Americans naively believe that a lie can be countered with the truth, and that truth will inevitably win out over lies in the minds of rational people; but that’s a Western idea that has no bearing in the Middle East. 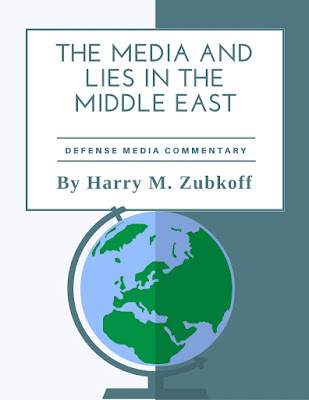 There are two aspects to the spread of lies that are especially baffling to a Western observer: one is the propensity of seemingly intelligent and rational young Jordanian and Palestinian men and women to believe Iraq’s lies; the other, and even more baffling, is the attitude of Western media reporters, interviewers and pundits who, upon hearing the most outrageous lies expressed, accept them and publish them without challenge.

The whole world, outside of the Middle East, knows that Iraq launched more than three dozen SCUD missiles at Israeli population centers in a vain attempt to draw Israel into the Gulf War. The whole world also knows that the United States made an extraordinary diplomatic effort to persuade Israel to stay out of the war, for fear that Israel’s entry would have destroyed the coalition arrayed against Iraq.

In retrospect, it’s hard to understand that fear, since the entire Arab world already believed not only that Israel was deeply engaged in the actual fighting, but also that Israel had instigated the war in the first place. Early in the bombing campaign, before the ground war started, the Iraqi News Agency claimed that dozens of Israeli aircraft and pilots were flying bombing and strafing missions against Iraq out of Saudi Arabia and Turkey. Baghdad also reported that “hundreds” of the coalition’s aircraft were shot down during the first two weeks. In fact, during the first week, Saddam announced that Tel Aviv had been turned into a crematorium, while the Iraqi News Agency reported that the Israelis had suffered thousands of casualties in the SCUD attacks and that Tel Aviv was now a “ghost town”.

Throughout the Arab world, and particularly in Jordan, there was great joy and dancing in the streets at this bit of news. In Jordan, the Amman newspaper reported that Israel was using Palestinians as “human shields” against Iraqi missile attacks, while the fact that Iraq was using Western hostages as human shields was not mentioned. At the same time, Palestinians being interviewed by Western journalists were claiming that Israel was somehow diverting incoming SCUDs to fall on Arab villages in the West Bank. Some Palestinians even charged that Israel itself was launching all those missiles against Tel Aviv as part of a propaganda ploy to whip up war fever in the U.S. by making Iraq look like a villain.

All this may sound ludicrous to most Americans, but there is ample evidence that it is widely believed, not only in the Middle East, but in the Arab-American community in the U.S., as well. A group of Jordanians, interviewed by Ted Koppel, asserted that a great many Israeli planes were flying bombing missions out of Saudi Arabia against civilian targets in Iraq. The Iraqi Ambassador to the United Nations said the same thing in an interview and even declared that proof of this claim would be presented at the proper time. And, in addition to Israeli aircraft flying against Iraq, Yassir Arafat reported from Jordan that the cruise missiles hitting Baghdad were coming out of Israel.

To top it all off, the reason why Saddam pulled his forces out of Kuwait was because the U.S. threatened to use nuclear weapons against him, according to the Algerian newspaper, widely read in the Arab world. Moreover, the coalition forces, suffering from close to 200,000 casualties at the hands of Iraqi troops, had to seek a cease fire or succumb to inevitable and humiliating defeat. And if any of this sounds too absurd to take seriously, there is now – even now, at this late date – the widespread belief in the Middle East that Saddam faced up to the West and emerged triumphant. Now, having defeated the coalition forces, he is reasserting control over his own country with the kind of savagery that has marked his career from the beginning, and which no one in that part of the world seems willing to condemn, least of all Yassir Arafat or King Hussein of Jordan.

Truth in the Middle East is irrelevant. People there will believe what they want to believe. In a way, that’s understandable. Far less understandable is the seeming willingness of Western journalists to allow such lies to go unchallenged and, in fact, to add credence to them by reporting and thus further disseminating them.