Recently I read about a trending toy for kids and adults – a modular drone. I couldn’t help but wonder whether the inventors know anything about the history of drones, which I learned only after reading the following article. Harry wrote it in 1991 and filed it (untitled) on his computer. He may have submitted it for Defense Media Review, the newsletter he originated post-retirement. Of course, he would have kept up with the evolution of drones in later years. And, he probably predicted drones as toys.


The SCUDs and the PATRIOTs got the lion’s share of media attention during the Gulf War, with the aircraft, the smart bombs and the tanks getting secondary billing. But there is another weapon that played a vital role – one that seems to have been overlooked by the public. The so-called drones – remotely piloted vehicles (RPVs) – served as a critically important intelligence tool in spotting targets for both aerial bombardment and artillery.

The drone is not generally regarded as a high-tech weapon, but that’s exactly what it is. In earlier versions, it would fly over a target area carrying a camera and bring back pictures that had to be developed and studied by expert photo interpreters before commanders could make tactical decisions. By that time, the target situation on the ground may well have changed. Present-day drones, however, are equipped with sophisticated night-vision sensors and television cameras mounted underneath the fuselage to provide an unobstructed view of the ground. They send back information in real time while overflying the target area, thus enabling commanders to make immediate tactical decisions. 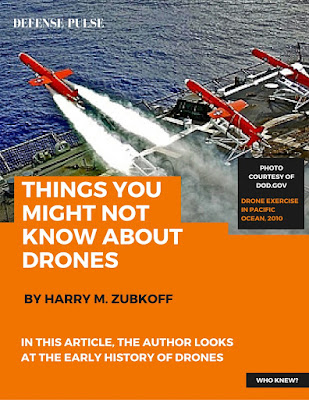 Ironically, considering that Iraq tried in vain to draw Israel into the conflict by lobbing 39 SCUD
missiles into Israeli population centers, the drones used by the American forces were purchased from Israel. IAI (Israel Aircraft Industries) is a world leader in the field. The impetus for the development of its drones came from the 1973 war in which Syria’s Soviet-built SAM missiles inflicted unacceptable losses on Israeli aircraft. Israel decided at that time that it would make better sense to use relatively cheap unmanned planes for reconnaissance, rather than the very expensive manned aircraft, to say nothing about the lives of its pilots.

Beginning in 1974, the Israelis invested substantial resources in developing a pilotless aircraft that could make the best use of the rapidly evolving technologies involved in radio, television cameras, computers and communications. By 1982, during the Lebanese operation, Israel’s drones made it possible for its Air Force to eliminate Syria’s SAMs in the Beka Valley in one day with no Israeli losses, a remarkable performance, which the American military studied with considerable interest.

The U.S. Army in the 1970s tried to develop its own RPV, but after investing some ten years and around a billion dollars, it gave up. The U.S. Navy didn’t really become interested until the mid-1980s, when it lost two of its planes to SAM missiles in Lebanon. After sponsoring an international competition, which IAI won, the Navy bought Israel’s RPV, called the Pioneer system. Modified by IAI for use from battleships instead of land bases or aircraft carriers, these drones were used for the first time by the U.S. in the Gulf War.

At first they were used to monitor Iraqi deployments and fortifications, both in Kuwait and across the border in Iraq. After the fighting started, they were used as artillery spotters for the big guns on the battleships Missouri and Wisconsin, as well as for Army and Marine batteries. Their transmissions showed the gunners exactly where their rounds were hitting, enabling them to adjust their sights for specific targets with devastating accuracy from a few miles to as much as 30 or 35 miles away.

Two people operate the ground facility controlling the RPV system, one to “fly” the vehicle with radio controls, the other to monitor the camera, the night vision equipment, and the communications gear. The payload technician can zoom in on targets without regard to the direction of the drone’s flight, although the two operators must for the most part coordinate their efforts. The effective range is ordinarily no more than about 125 miles, depending on the altitude of the drone, since radio communication between the drone and the ground controllers is by line-of-sight.

Given the spectacular, though largely unsung success of these drones, it seems most likely that the Army and the Navy/Marine Corps gunnery planners will start acquiring more such systems for future use. The Air Force, on the other hand, seems to have little interest in the notion of planes without pilots.