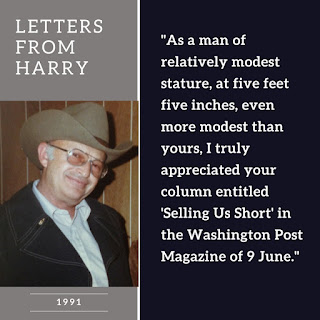 If you have enjoyed the letters Harry wrote in several earlier posts on this blog, you’ll like the following letters, too, also recovered from his computer files. They add humorous and thoughtful details to what we know about his personal life. And, they further prove that he could write about anything.

Your letter of January 28 came as somewhat of a shock to me, since you indicated that I had a “difficult” semester in the fall. As a Golden ID Student, I audited a course in Modern Military History (History 224) and I must say I enjoyed every minute of it. Not only did I not have a “difficult” time, I had a truly delightful time. I found the course both informative and entertaining, while the Professor, Dr. David Trask, and his Teaching Assistant, Paul Moreno, both displayed a depth of knowledge that added immeasurably to the texts we studied. Indeed, I came away from the course with a feeling of satisfaction at a semester well spent and a sense of accomplishment at subject matter well learned.

You will understand, therefore, why I was at a loss when your letter suggested that I consider repeating the course or perhaps attending a workshop on “Recovering from a Bad Semester.” You also suggested that I consult my “assigned advisor”. I’d be happy to do so, except that I didn’t know I had one. Did I get one somehow while I was having a “difficult” semester? In any case, I am currently auditing the follow-up course, History 225, and I will be most pleased if this semester turns out to be as “difficult” as the fall semester.

I don’t really mean to be facetious, but I’d be very interested in hearing what bureaucratic procedure or what legal requirement prompted you to send me that letter.

As a man of relatively modest stature, at five feet five inches, even more modest than yours, I truly appreciated your column entitled “Selling Us Short” in the Washington Post Magazine of 9 June. You did, however, inadvertently, I’m sure, forget to mention one other problem. In addition to the problem with shoes, which you described so eloquently, there is also the problem of men’s socks.

I refer, of course, to the monstrous hoax perpetrated on the male population of modest size by all the manufacturers of men’s socks who advertise that one size fits all – size 10-13. This is an obvious lie, and surely a violation of the law that prohibits false advertising. It may very well also be a violation of the anti-trust laws, since all the manufacturers seem to have entered into a conspiracy to hoodwink men with this “one-size” scam. Not only are those socks too big to begin with – the heel comes midway up my ankle – but it is my observation that socks are the only male garments that do not shrink but rather grow with each washing.

As a result of this nefarious practice, I and many others I know are reduced to shopping for socks, furtively, to be sure, either in the Boy’s Department or the Women’s Department, where size 9-11 is available. Unfortunately, neither the Boy’s nor the Women’s Departments carry socks of a quality and style equal to those in the Men’s Department. So I want to go on record as endorsing your call for men of modest size to rise up and rebel against the clothing manufacturers of America and their unfair sizing policies, as well as their unfair pricing policies. The trouble is, almost all of them are now in Taiwan, or South Korea, or China, or Hong Kong, or Indonesia, or Latin America, or Eastern Europe – or almost anywhere but the United States.

It was very thoughtful of you to send me a copy of your December issue, and I can’t tell you how pleased I was to receive it. The pictures and the maps are phenomenal; Allen’s accompanying commentary is outstanding. Over the past fifty years I’ve read hundreds of articles and dozens of books about Pearl Harbor, but nothing I have ever seen presents so clear and graphic a summary of that event as this issue of the National Geographic magazine.

I recall very well where I was on that fateful day. I was working for one of the so-called war plants – the Bell Aircraft Corporation in Buffalo, New York – which was on a three-shift schedule at the time. Everybody knew that we could not stay out of the war in Europe forever, and that a war with Japan was probably inevitable, too. We were producing airplanes, mainly for the Russians for lend-lease, but also, we hoped, for eventual use by our own Air Corps.

It was Sunday afternoon with the plant going full blast when the loudspeakers came on with the announcement about the attack on Pearl Harbor. The grim certainty that this meant war only confirmed our fears, and when President Roosevelt announced that the Congress had declared war a couple days later, it was almost an anticlimax. I decided right then and there that I would devote my life to serving my country and, aside from my military service during the war, that’s exactly what I did as best I could as a civilian for almost forty years.

It’s hard to believe that the attack on Pearl Harbor took place fifty years ago. (It’s also hard to believe that I am seventy years old.) And it’s equally hard to believe that the Japanese are so sensitive about the subject. December 7 ought to be a day of remembrance in Japan, as well as in the United States. If they had any public relations sense at all, instead of withdrawing their advertising ($1.8 million from National Geographic alone, according to the Wash. Post), they would increase their allocations to help fund such retrospectives. Indeed, I believe that a properly planned and executed public relations campaign centered around the Pearl Harbor experience could very well help bring our two countries closer together. As it is, the Japanese seem to be fostering the impression that they would gladly do it all over again in a 1990s kind of way – not militarily, but economically.

Ah well, that’s neither here nor there. Thanks again, Bob, I really do appreciate your thoughtfulness.