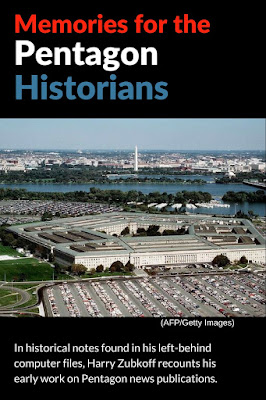 Here’s the last of Harry’s pages of notes in his computer files on the Pentagon publishing operation in the 1950s. They were last edited March 3, 2010, although that could be the date he reorganized the files. These reflections follow the previous three posts on this blog. Together they reveal a snapshot of our father who carpooled to the Pentagon when my brother and I were very young.


By the end of the 1950s, we had pretty much achieved some stability in the Current News operation. The Air Staff had established a printing plant next door to our office and, by written agreement, had assigned top priority to printing the Current News. I kept that written agreement handy because I frequently had to use it to shout down some Air Force Colonel who wanted his stuff, whatever it was, printed ahead of the Current News. Anyway, we were distributing between 400 and 500 copies to the Air Force – both the civilian and military staffs – and another 300 to 400 to Office of Secretary of Defense, Joint Staff, Army, Navy and Marine Corps.

Aside from the military services, we were also giving about 100 copies a day to the other Defense Agencies, such as Defense Intelligence Agency, Defense Logistics Agency, DARPA, etc. We were printing the front page of the morning edition, which we now called the Early Bird, in yellow paper to distinguish it from all other papers on the peoples’ desks. We had also started printing a main edition. The Early Bird had, since the very beginning, come out at 6:00 a.m., so that the chauffeur could get a copy when he went to pick up the Secretary of the Air Force in the morning. The Secretary would read it on the way to work and by the time he got there his juices would be flowing freely. By 1960, the Secretary of the Army, Secretary of Navy and Secretary of Defense all made the same arrangements. This aspect of our distribution problem became a real headache as time went by and demand grew. But more on that later. 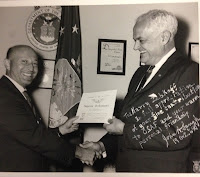 In order to meet our 6:00 a.m. deadline for production, we had to start screening and clipping around 2:00 a.m. This is where the work became an adventure. We could get the Washington Post okay – the first edition came out around midnight and was available to the Post’s loading dock then – likewise the Wall Street Journal, which was also printed locally. Fortunately, we had people on our staff who volunteered to start work at 1:00 a.m. and fetch those papers. For a while, several of us took turns doing it – a terrible chore for me about once every two weeks – but in 1961, when Leon Simms came aboard, he took over that job permanently – Leon, a man for all seasons. More about him later.

The out-of-town papers were another matter. Most East Coast papers came to Washington by truck – from Boston the Boston Globe and the Christian Science Monitor; from New York the NY Times, the Long Island Newsday, the NY Daily News (afternoon) – also the Philadelphia Inquirer, the Baltimore Sun, and from the South the Richmond Times Dispatch, the Atlanta Constitution, and a few others I can’t recall at the moment. They all arrived at an out-of-town newsstand in Bladensburg (border between D.C. and Prince Georges County in Maryland – a scary neighborhood around 4:00 a.m.) We also took turns picking them up until Leon took over.

I should also mention that the LA Times and the San Francisco Chronicle came to National Airport on the red-eye flights around 6:00 a.m., and we made arrangements to have them delivered to us by about 7, so those papers, and Washington’s afternoon papers – the Times Herald and the Daily News, all went in the Main Edition which came out at noon. By that time, Sgt Earley had retired [she was the namesake for the original Early Bird], I still had several (three or four) enlisted personnel working for me, and we still had three or four officers from Major to full Colonel in the office whose main job was writing speeches and congressional testimony for the Secretary. That was an activity that Murray Green and I both were actively involved in and for which we needed Top Security Clearances. 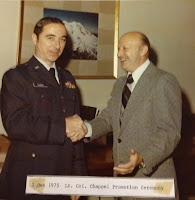 I seem to recall that I had to be re-investigated and re-cleared every five years or so. Also, every two years or so we got a new Colonel in charge of the office. We got two kinds of Colonels – either it was his last active duty assignment before retiring or it was his best assignment on his way up the ladder – a prestige job working for the Secretary. Every one of them was a sharp, intelligent, top-notch guy.

So, we had two deadlines a day and the situation was fairly stable – except during snow storms and really bad weather when the trucks didn’t get to Washington on time – occasionally hours late. I remember (sidebar here) when truck drivers were mad about the 55 mph speed limit that was imposed nationally – 1973 was it?? – so coming in from the north on the NJ Turnpike they breezed along three abreast blocking the whole road so nobody could pass them and came in two or three hours late. This went on for weeks until they were finally permitted to speed on the turnpike without getting ticketed. Anyway, everything changed in 1961, when Kennedy came into office and McNamara came in as Secretary of Defense and Gene Zuckert came back as Secretary of the Air Force. 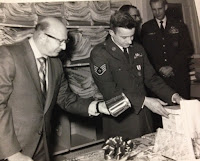 When Zuckert came back, he greeted me as an old friend. I told him I was especially glad to see him come back because, while he was number one on the roster of Office of the Secretary of the Air Force personnel, it was also true that he followed right behind me on the alphabetical roster, which meant he was also last – sort of like George Washington, first and last in the hearts of his countrymen. One of the first things he did was fire the Administrative Assistant, my boss John McLaughlin. After John, there were a number of Administrative Assistants – Phil Curran, Tom Nelson, Joe Hochreiter, John Lang and Bob McCormick. I got along well with all of them, but it was an efficiency expert who was brought in some time in the late 1960s to examine the workings of the Secretariat, who jolted me by saying that the reason I got along well with my bosses was because they made a special effort to get along with me. More on that later.

(Although Harry ends with "More on that later," I haven't come across further reflections in his old files. If I get my hands on more, I'll let you know. You can get an overview of his years at the Pentagon in the book "Distorting Defense, Network News and National Security" by Stephen P. Aubin. )