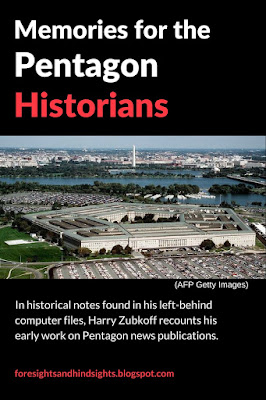 Harry’s notes below appear to be continued from those in the previous post on this blog. There he recounted how the Early Bird, the Pentagon’s former signature publication, got its name in the 1950s, and the start of the long-time Current News. I found these last edited April 3, 2009. So, who in the world will be interested in this bit of Pentagon history? Possibly the Pentagon historians – and those of us who still marvel at learning more about Harry’s remarkable life.


In the early ’50s, the demand for our daily clips grew beyond our ability to produce it. The problem was reproduction. The Secretary of Defense wanted a copy and the Joint Staff, too (this was before there was a Chairman of the Joint Chiefs of Staff), so we were buying multiple copies of the newspapers and cutting five copies of articles and pasting up five copies of the Current News.

In addition, we were making a few more copies on the Photostat machine, but I kept looking around for other ways to reproduce it. Of course, we could get it printed just like newspapers, but that would mean setting up a printing plant, with presses and all, which was impractical if not impossible. I looked at mimeograph machines and that would work if we retyped everything on those mimeograph wax-sheet stencils, but that was also impractical.

Then I found a mimeograph machine that would work. It was a German machine, a Gestetner, that used a rubber stencil. The way it worked was, there was a separate machine that was used to copy anything on to a rubber mimeograph stencil. It could copy newsprint and sketches or drawings okay (pictures, too, but with poor resolution), so we still had to paste up our pages, then copy them on a stencil and then run them off on the mimeograph machine. The only drawback was that it took about five or six minutes to make each stencil, so, for four pages it would take a half hour, including the time to change stencils, etc. We were doing all this at about 6:00 a.m., trying to get copies ready to give the Secretary, et al. at 7:00 a.m., when they got to the office. Each stencil, by the way, was good to run off about 100 copies, which I thought would be more than we would ever need. Little did I know!!

When I demonstrated the wonders of these machines to the blueprint department where they were using the Photostat machines, they were so impressed that they bought several of them and started replacing their Photostat machines, and I got a special price from Gestetner to buy a second stencil-making machine and a second mimeograph machine. With the two machines, we were able to make all the copies we needed and still meet our deadlines. This worked pretty well for several years in the early and mid-50s. 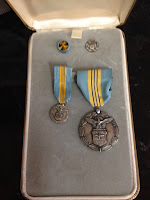 We were now printing very legible multiple copies that looked very professional, and getting to be known as the Current News. And, as our capacity to reproduce copies increased, the demand for copies increased as well. We were doing this almost exclusively for the Air Force, though we were giving a few copies to the Secretary of Defense and the Joint Staff. Then the Secretary of the Air Force wanted all the Assistant Secretaries to get it, and the Chief of Staff wanted all the Deputy Chiefs of Staff to get it, and all of them wanted their Execs to get it, and their office staffs, etc, etc. Then suddenly we found ourselves running off a couple hundred copies using both machines and still not able to meet the total demand. An interesting sidelight is that the stencils, which were guaranteed or advertised as good for about 100 copies, started stretching and warping at about the 125th copy. They were, after all, a very thin rubber, and we spoiled a lot of them when we first started using them just in the handling. So we worked with the Gestetner reps in helping them improve their products.

I had never paid much attention to organizational arrangements, but suddenly I was confronted with an unexpected problem. My office was a separate division under the Administrative Assistant to the Secretary of the Air Force. Next door to me was another division that handled all the mail coming in to the Secretariat as well as several other things and, in one of the many reorganizations taking place in those early days (remember, the Air Force as a separate Service was only two years old and still trying to organize itself), that division was transferred to the Air Staff, specifically to the Asst Chief of Staff, I think. That organization claimed responsibility for all Air Force printing requirements in the Pentagon, including the Current News. They wanted to appropriate my Gestetner machines and take over all 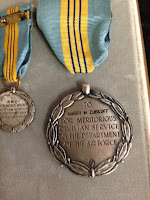 my reproduction needs, and I told them to go to hell. (Ever the diplomat, me.) It escalated right up to the Secretary and the Chief of Staff, who agreed to let me retain my machines and do my own printing, until the Air Staff could come up with an improvement on my operation.

So … the Air Staff took over a block of space next to my office and set up a reproduction facility which eventually became the Air Force Printing Plant. They invested several million dollars in strengthening the floors there to hold hundreds of tons of printing equipment, which rivaled the Navy Printing Plant down in the Basement of the building. And, in time, they did, indeed, come up with a better system, at which time I was happy to turn over the printing business to them. It was, however, agreed to between the Secretary and the Chief of Staff – in writing that I had a copy of in my files – that the first priority in that Plant was the Current News.

In later years, I had a lot of run-ins with Air Staff Reps, and one recurring one was when they wanted to delay the Current News printing in order to print something else with greater urgency, in their view, and I objected. The poor guy who ran the Plant had to do what his boss told him to do, and when he told me so, I had to go over his boss’s head either to the Chief of Staff or the Secretary, and I always won and they hated me for that. 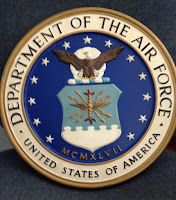 (Stay tuned for Parts 3 and 4 of Harry’s historical notes.)