On this page we see more reflections from Harry’s early Pentagon years. Whether he intended anyone to see them (other than the original recipient) we’ll never know. As our family reads these notes, however, we can pair some of his experiences with the Pentagon photos taken during his career. I found these notes dated Jan. 3, 2010 in computer files, though I think he wrote them years earlier. 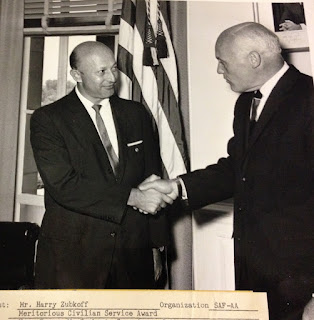 When I came to the Pentagon, the United States Air Force, as a separate service, was just two years old. The first Secretary, Stuart Symington, was just leaving and the second Secretary, Tom Finletter, was just arriving. One of the Assistant Secretaries was Eugene Zuckert, whom I met early on and took an immediate liking to. The Special Projects Office was run by a couple high-powered Colonels, established to do special jobs for the Secretary.

The thing to remember is that the Air Force was still trying to organize itself and the Secretary had all kinds of organizational problems in trying to adjust its civilian staff to do the administrative things while the military side was trying to adjust its staff to get out from under the Army and do the military things – and there was a lot of confusion about who was responsible for what. The civilians had no responsibility in operational matters, and the military had some partial responsibility and a lot of interest in administrative matters. Thus there was a lot of tension between the Deputy Chiefs of Staff and the Assistant Secretaries, while the Secretary and the Chief of Staff were mostly cordial. All the discord took place at the second tiers and Gene Zuckert set the original ground rules at that level and got most things smoothed out. Another Assistant Secretary was Roswell Gilpatric, though my mind’s a blank as to when he came in, but I got to know him, too, and he was more of an intellectual than the others and did a lot to enunciate and clarify Air Force thinking in those early days. 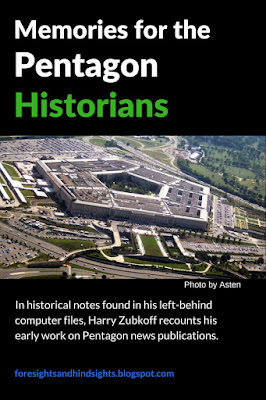 Anyway, the Colonels and a couple other civilians in the office were mainly occupied in doing things for the brass – the Secretary and Asst Secs and also the Chief – writing speeches, and preparing congressional testimony. Remember, on top of everything else, the war in Korea was just getting underway and the Air Force was scrambling to get into it. Busy as the office was, they turned over the less important stuff to me, the newest member of the staff. By the way, two other people were hired at the same time as I. One, Louise Gronniger, stayed on with me until she retired, a few years before I did.

So, like I said, I got the less important odd jobs thrown at me. One was the newspaper clipping service which became the Current News. Another was the requirement, which some congressman wrote into the law – the National Security Act, I believe – that each Agency must submit an Annual Report. So the Secretary told the Chief to prepare a draft and the Air Staff set up a historical office to write Air Force Histories and then the Chief told the Secretary to prepare a history of the Secretariat to include in the official Air Force History … so, this round robin led to me being assigned to write not only the Annual Reports, which I did for many years, but also a classified history of the Office of the Secretary of the Air Force, which I also did for many years. That, in turn, led to me being asked to write an annual account of USAF progress/history each year for various encyclopedias. And that, in turn, led to me being asked to write articles for various magazines, which I did a lot of on my own time at home so I could get paid with a clear conscience. But that’s another story.

By the end of the 1950s, the Current News had grown substantially. We were now getting more newspapers and doing more screening and clipping and putting out more pages in the morning.  I think it was in 1959 or 1960 that we went from 6 to 8 pages. By this time the Air Force Printing Plant was in operation. They had a lithograph printing press. And they had a machine that could take a picture of a Current News page and make a plastic/paper mat which could be put on the press and inked up and reproduced in hundreds of copies. We were making and distributing about 500 copies each morning. And it was no longer exclusively for the Air Force – mostly but not exclusively. We were giving copies to the Secretary of the Army, Sec/Navy, Sec/Def, and Joint Staff. Plus, all kinds of people were coming into the office to pick up any extra copies laying around, if possible.

Lots of things were happening in 1960, not only in our office. Eisenhower was finishing up his eight years as President and a new campaign was getting started. Kennedy was entering the national scene, this young Senator from Massachusetts, and Nixon was hoping to graduate from Vice President to President to succeed Ike. Those were exciting times and our office was getting busier. But let’s back up a bit.

During the decade of the 1950s, several organizational things happened. We were still the Special Projects Office and there was always a Colonel at the head of it with a civilian as the second in command. The civilian was Murray Green, also a Reserve Colonel in the Air Force. Now, the Colonel had a military staff, usually three or four officers helping him with all the writing he did for the top brass. The civilian had a half dozen of us helping, also, with writing and other projects for the brass. I was pretty much the number two civilian, running the clipping service and writing the histories, etc., and also helping with the writing chores. Every now and then I was assigned the major responsibility for writing a Secretarial speech. But, mainly, I was administratively running the office. That is, keeping the time and attendance records, making sure all the personnel matters were attended to, etc., taking care of all the performance evaluations, writing up the award and commendation recommendations, and, also handling disciplinary matters, as well. I still had several, three to five, enlisted personnel working for me as well as a few civilians.

The next page of reflections in Harry’s files I had already prepared as a blog post (in two parts) in 2015. It refers to his role in a McCarthy-era case while he was working at the Pentagon in the 1950s and living in Greenbelt, MD. That page begins like this:

If I repeat myself in these looks back, it’s because as things occur to me, I get a different perspective in my reflections. Anyway, in the early ’50s, my office was moved to the Public Relations office for maybe six months or a year and then back to the Secretary’s office, although our work was for both the Secretary and the Chief – it’s just that their staffs kept juggling things around before they finally settled down and we were placed under the Administrative Assistant to the Secretary. At that time, the AA was John McLaughlin, who had been there from the beginning in 1948. In 1953, I came forcefully to the attention of the Secretary. Here’s what happened.

This has nothing to do with my Air Force career. You may recall that this was the era of Senator Joe McCarthy, who accused the State Department and the Defense Department of harboring a bunch of communists. Security considerations took precedence over everything else in DOD. Early in 1953, the Navy Department fired five people as security risks. ...

You can read the rest of that page of reflections in posts on this blog from November 2015: "Harry recounts McCarthy-era case in our Greenbelt, MD, hometown"

(Stay tuned for the last page of Harry’s historical notes on his early years at the Pentagon.)