Is the United States the world's policeman?

In May 1993, Harry wrote the following article and filed it on his computer with the title “DMR”, likely for Defense Media Review. That’s the name of the private newsletter he started after he retired from government in 1986. Harry’s professional bio called the newsletter “a summary analysis of media coverage of defense related news and commentaries.” The New York City Tribune printed a story about it, shown at bottom of this page. In 1989, Harry sold the newsletter to Boston University, but evidently still submitted articles. 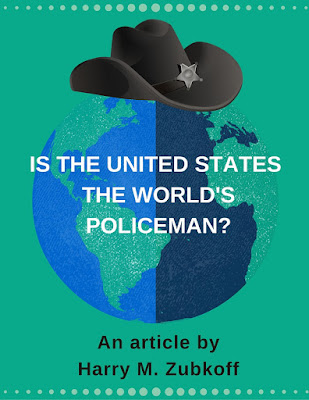 The most popular and widely repeated cliche of the past half century is that the United States cannot be the policeman. Now that the Cold War has ended, that cliche has become even more entrenched in the public consciousness. Every media pundit who comments on foreign policy and international security affairs has embraced it, as has almost every politician and every military spokesman. Indeed, it has been repeated so often that it has assumed the status of a mantra. Repeat after me – “the U.S. is not the world’s policeman, the U.S. is not ...” – etc., etc.

But is this really a true expression of our national will, or of our national character? Are we really unable or unwilling to help right the world’s wrongs, or are we inhibited from expressing strong views on international conflicts by this omnipresent cliche? Maybe it’s time to review the phrase, and to reevaluate our policy, as well.

The United States never really sought or wanted a position of world leadership. It was, so to speak, thrust upon us when we emerged from World War II as the one true superpower. Throughout the period of the Cold War, the Soviet Union was a superpower only militarily; in all other respects it was basically a third world country. With the end of the Cold War, the United States remains the only world superpower and Russia is still a third world country, as are all the states that once comprised the Soviet Union. But the end of the Cold War brought new credence to another aspect of international relations, the United Nations.

With the demise of the Soviet Union, the United Nations has become more like the effective international force for harmony that it was meant to be. At the same time, the need for an effective international agency has multiplied as the long repressed nationalistic fervor and ethnic hatreds of Eastern Europe have been revived. Throughout the Cold War period, the Soviets blocked the UN from playing any really meaningful role in world affairs. What’s more, the Soviets never helped the UN in those situations where the UN was allowed to play an active role. In every case in which the UN played its proper role, it was because the United States was a strong participant. There is no question that without the Soviet Union, the United Nations is a stronger force for good in the world community.

It is also true, unfortunately, that the UN cannot act at all without strong backing by the U.S. Like it or not, the U.S. is the leading power in the world, which brings with it the responsibility to use its power as a force for international stability. The question is, can we make such a contribution by using our power or by withholding it? And if we decide to use it, can we do so unilaterally, or must it be done in concert with others? These questions emerge as the most relevant with respect to the current situation in the former Yugoslavia. If ever there was a conflict anywhere that cried out for intercession, this is it. The outrageous acts by the participants, the entire concept of “ethnic cleansing”, the crimes against humanity, demand intercession.

The European nations, in whose immediate neighborhood these things are happening, profess to condemn the mass rapes, the mass deportations, the concentration camps, the tortures and the murders – all the horrors perpetrated in the name of ethnic cleansing. The best they are willing to do, however, at least until now, is to provide some humanitarian relief – food and medical supplies. They are unable to organize an effective military intervention, which would require the deployment of a substantial ground force. They are unwilling to make any substantial commitment of military force, even if the United States provides the lion’s share of such forces, including the essential element of air power. They would prefer to wait and see if a solution can be found through diplomacy, though all diplomatic efforts to date have failed.

The point is, all the European countries together have not thus far been able to stop the horror, either diplomatically or militarily. Can the U.S. do it alone? Of course not. If a military intervention is ever to be decided upon, and if it is ever to be successful, it must be an international effort under the auspices of the United Nations, and with the United States, as the most powerful nation, bearing the brunt of the burden. It seems as though the U.S. has become the epitome of the “Have gun, will travel” syndrome. Our leaders may be willing to participate in an international effort. The question is, are we the people willing to do so? Are we willing to act as the world’s policeman, even in concert with other nations? Or, to put it more bluntly, are we willing to become the world’s mercenaries?