How the press will cover the next war

The media was Harry’s professional domain. I discovered the following hard-copy article filed with the title in the graphic below, “How the Press will Cover the Next War.” Then I found a published version in International Combat Arms magazine with the title “The Media’s Role in Modern Warfare”, January 1987. Yes, the 1980s may seem ancient, but Harry makes several points I believe you’ll appreciate. And, you may find this piece entertaining. 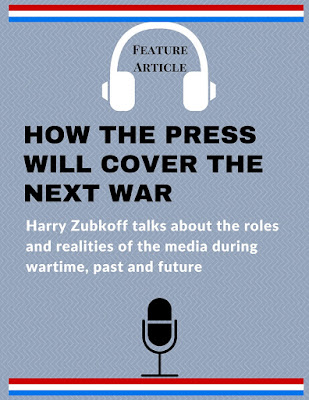 In the late 1930s I saw a movie that recreated a period when the occult arts reigned in ancient Egypt. A beautiful princess had a crystal ball – more like a sunken bathtub in her living room – in which she could see anything and everything that was going on in any part of her world. She could, for example, focus on a scene in any town or village in her domain. She could, if she so desired, focus on a battle taking place a hundred or more miles away. And, if the spirit moved her, she could even tune into someone’s bedroom to see who was doing what to whom.

Now, some 4,000 years later, and about fifty years after that fantasy film, we have the capability to do just about the same thing – to see and hear anything going on in our world. The technology is here, the equipment is more or less in place, or at least available, and all we have to do is press a button, flip a switch, twist a dial, whatever.

With this kind of capability, the media, both print and broadcast, can cover events occurring anywhere, from the winter Olympics in Switzerland to a war in the Falklands. Right now, of course, the reporters and the video cameras have to be on the scene, and there may be a problem getting to where the action is, but the day is not far off when that may not be necessary. Cameras mounted on satellites and positioned in space so that any spot on Earth can be kept under constant surveillance, will be available to the media. Communications gear is already available so that the media no longer have to rely exclusively on military communications facilities and cooperation to transmit their stories back home from the war zone.

Given these capabilities, do you think it will ever again be possible to exercise the kind of censorship or controls over the media that existed during World War II? I doubt it. So how will the next war be reported? Fully, I think, though not necessarily accurately.

But let’s first define what we mean by war. If there is an all-out exchange of nuclear weapons in the future, the question of how it will be reported by the media is irrelevant. It will probably not be reported at all except, perhaps, by the sages or patriarchs gathered around the campfires that warm the remnants of the human race. In any case, no one will care. However, since we have avoided a nuclear war over the last four decades since World War II ended, and since our deterrence policy is still operative, it seems most unlikely that this kind of catastrophe will occur in the near term.

In all probability, therefore, if there is to be a war, it will be a conventional war, either a large scale World War II type of conflict or a smaller scale Vietnam or Afghanistan type of conflict, fought with so-called conventional weapons. In either case, the way in which it will be reported will undoubtedly be the same as that in which all of the recent conflicts in the world have been reported. That is, in the same old traditional ways that wars have been reported until now.

There are two major problems in reporting on a war: to obtain the information necessary for conveying some measure of understanding to the consumers; and to transmit that information. Until now, the information has largely been controlled by those who conduct the war – that is, the military spokesmen on the scene. Reporters have always had to rely almost entirely on those sources. Moreover, the reporters have had to rely almost entirely on the cooperation of the military to transmit their information.

If reporters felt that on occasion their sources were not sufficiently forthcoming in providing information, they have been known to fabricate information – or, at least, to speculate to the extent that they might as well have been fabricating. That’s SOP, more or less.

Some of them, the more enterprising ones, will try to seek out some other than “official” sources. They might go out into the field with combat units, where they can experience firsthand a “small slice” of the war themselves. This may produce some human interest stories and even, perhaps, help convey a partial sense of reality to the viewer or reader. It cannot, however, by itself, convey an understanding of how this one small unit action fits into the overall strategy in the conduct of the war, or even to the tactics used in carrying out that strategy. Nor can it accurately reflect the overall progress in the larger war in achieving our military objectives. In short, the best it can do is describe a small action which may or may not be inconsequential.

Other reporters may congregate around the bar in the hotel where they are all being housed, passing along to each other any tidbits of gossip or rumor making the rounds on any given day. Then, each night, they will dutifully file their stories in time to meet their deadlines, with the maximum number of words needed to fill a column and the minimum amount of information needed to qualify as a news story.

With the technological developments becoming available, however, they will no longer have to rely so exclusively on the military, either for the information itself or for the means to transmit it. And, since the information will be available to their editors, too, the reporters may well be forced to greater objectivity and honesty in the quality of their reports. In fact, the day may come when it will not even be necessary to send reporters out to the scene of the action. They may be able to view the action in the relative comfort of their home offices and write their stories at their own desks.

But let’s not look at the future; let’s look at the recent past. There has already been a technological revolution over the last few years in the art of news gathering, with the advent of portable video cameras and satellite ground stations that can transmit news and pictures in real time. As a result, the networks now devote more than twice as much time to the coverage of foreign news, directly from location, as they did five years ago, and three or four times as much as they did ten years ago.

Unfortunately, just as the media have learned to use the increasingly sophisticated technology to transmit the news, so have others learned to use it to manipulate the news – and the media as well. I don’t want to belabor the point – that’s another story that deserves extensive discussion by itself – but there is a real question as to whether the press has mastered the new technology as an instrument for disseminating the news or whether it has become a captive of the new technology as an instrument for manipulating the news.

Now let’s consider another aspect of the reporter’s dilemma. In the past, in our wars if not in all wars, almost all a reporter’s information has been obtained from only one side – our side. Information obtained from the other side, the enemy’s side, if available at all, has invariably been suspect. Indeed, all our previous experience indicates that the “enemy” has been exceedingly clever in using the media to advance his own views and perspectives. The result is propaganda which obscures the truth of any situation and also casts doubt on the veracity of our own spokesmen.

For that matter, even factually accurate reports do not necessarily convey the truth about a situation. When a television camera focuses upon a riot – say in Saigon, or in any city, for that matter – it actually obscures the fact that the rest of the city is going about its business normally and peacefully, which is a strong indication that the riot may well have been staged for the camera.

Whenever I look at television news reports, I am reminded of what W.C. Fields said the first time he met Mae West. He looked her over carefully from head to foot with that inimitable scowl on his face. “There is less here,” he said, “than meets the eye.”

Another problem confronting the media is the dwindling proportion of reporters who have any military experience or who will be able to understand the complexities of modern warfare. Military policies, strategies, doctrine and tactics are subjects of professional study, not easily or quickly absorbed by newcomers to the field. Even experienced reporters, used to covering all kinds of news stories and adapting to all kinds of breaking news events, would have considerable difficulty in understanding and reporting on a war in a way that would make it comprehensible to the audience at home. Of course, that won’t stop them from trying. The media will undoubtedly send droves of young, inexperienced reporters to “cover” the next war, all of them eager to don the glamorous mantle of “war correspondent” – and all of them willing to learn on the job. And the media will no doubt print thousands upon thousands of words of copy, with little or no regard to how much they all add to or detract from the public’s understanding of the true nature of the conflict.

In my view, the media would do well to seek out some retired professional military personnel who can write – there are many such – and whose background of knowledge and experience could add immeasurably to the quality of their reports. After all, don’t the networks constantly seek out retired professional athletes to provide knowledgeable commentary on sports events? Is not the adequate coverage of a war at least as important as the coverage of football games?

In any case, the manner in which news events are covered today, and the manner in which they will be covered in the near-term future, is changing because the technology is changing. It is impossible to predict with any degree of confidence all the ramifications attending these changes, or to predict what the ultimate impact will be on public perceptions or public opinion. But one thing is for sure – the public’s demand for news is insatiable and the media will do their best to satisfy that demand. Even if they’re only partially successful, the mere fact that our press is free to try is a cause for some celebration.