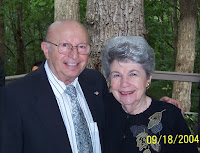 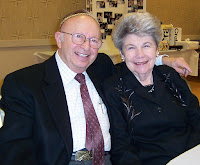 Harry always had his camera close by. Snapping photos at special occasions and distributing prints to friends and family was one more activity that kept him busy and learning new things during his elderly years. Recently I found the three photos above in a file on Harry’s computer with a couple hundred others I’d never seen. I also retrieved the following email he apparently wrote to a friend’s daughter on Sept. 2, 2007, after her father passed away. I hope she will see this blog and feel inspired anew because others are enjoying Harry’s reflections, too, and possibly taking his advice.

A few years ago, an old friend of mine died – I should say a long-standing friend of mine since I have many young friends as well as a few old friends, by which I mean those around my age. I was 86 in June, and there are not many my age left any more. Anyway, when he died in his early 80s, he left two daughters in their late 50s and several grandchildren in their late 20s to early 30s. His wife had died ten years before he did. When he died, TIME magazine was going to write an obit about him and sent a reporter to interview his daughters. What they found out was more than they expected. In the end, they decided to do a story on what they called middle-aged orphans, which is a growing phenomenon in our country as people are living longer and children are generally parents themselves when their own parents die.

You understand, of course, that whenever someone close to you dies, either a relative or a friend, you can’t help reflecting on your own mortality, and this is especially true of those of us who manage to reach their 80s. We know that we do not have many years left to us and we have a desire to impart as much as possible of the wisdom we have acquired over the years to our heirs and younger friends. But, more important, we tend to reflect on just what we have learned from our own experience and just what constitutes wisdom that is worthy of passing on to anyone else.

When I was young, middle age was considered the 40s and 50s. Old age was considered the 60s and 70s. People who lived into their 80s were called octogenarians; they were few and far between, ancients. My own parents died in their mid-50s, nine months apart, when I was 19 and 20 respectively. Almost all my peers had lost their parents by the time they were 30. It was a rare teenager who had both sets of grandparents still alive then. It’s different now. I keep going to weddings of grandchildren of people I know, where both the bride and the groom have both sets of grandparents attending and dancing at their weddings. In fact, in a few weddings recently, there were four sets of grandparents attending, because both the bride and the groom were marrying a second time and their parents had been divorced and remarried, too. Relationships for them had become extremely complicated, I must say, and after a few explanations I was confused beyond words. Suffice it to say that the wedding party of family alone, in one case, consisting of parents, grandparents, siblings and step-siblings, etc., amounted to 47 people.

For a couple like Jeanette and myself, who have been happily married for 64 years now, it is sometimes amazing to see the number of divorces among younger couples these days. And yet, when I talk to them separately, I can understand why they found it necessary to separate. What I can’t understand is why they married in the first place. Except for raging hormones and the sexual attraction, they should have known they were incompatible. One of the few advantages of advanced age (like mine) is that we see some things clearly that younger folks find cloudy or obscure. Which is not to suggest superior wisdom – only a different perspective.

I am the youngest of four siblings, two sisters and a brother. We were close in some ways, distant in others. The oldest, a sister, was ten years older than I. My brother was seven years older. My second sister was four years older. The standing joke in the family, after we were all adults, is that my second sister was always referred to as my younger sister, which, by definition she was. My oldest sister died six years ago, at the age of 91. My brother died nine years ago at the age of 84. By the way, he was career Air Force, enlisted in 1940, right after WWII started in Europe in 1939, started as a Flying Sergeant and graduated to the maintenance field and served until he retired with 25 years as a Chief Warrant Officer in the mid-1960s at the age of 55. My “younger” sister is 90 now, living in a nursing home in California. We visited there for her 90th birthday less than a year ago.

The deaths of my older siblings made me feel like an orphan all over again, as I had when my parents died so many years ago, and started me thinking about my own mortality. Every time a friend dies now, every funeral I attend, finds me thinking of all the things I want to do yet and how little time I have left. That’s why I try to do as much as I can each day and why I commit myself to do many things that just a few years ago I would not have done. Because, like most people, just a few years ago I behaved as though I were immortal, as though the thought of death simply didn’t occur to me. Even now, it’s not so much the thought of dying that bothers me – it’s the urge to do as many things as I can while I have the will and the strength to do them.

I have noted, with a few rare exceptions (your Dad was one of the exceptions), that most of the funerals I attend nowadays involve people who are not doing anything special – not working, not involved in ongoing projects, hobbies, avocations, studies, mind-occupying activities, etc. I don’t mean that they’re just vegetating or sitting in a rocking chair all day. Sure they have a sort of social life, they go out to dinner now and then, they see friends, they play cards, they go to movies. But they’re not doing anything constructive. They’re not using their talents or their skills or their minds. I so admired Tom, I’ll tell you, because his mind never stopped working and gnawing at problems and seeking solutions to all kinds of perplexing things. I felt about him in some ways as if he were my younger brother and he kept asking me why things are the way they are and why can’t we do something to fix them, and the very fact that he kept asking why forced me to think about things I didn’t want to think about. He’s the only person in the world, except for my own brother, with whom I could spend hours on the telephone and enjoy every minute of it – and not begrudge the time taken away from anything else.

Now, Cathy, I’ve gone on and on bending your ear (eye?) too long and getting a little maudlin, too, but what I started out to say, and took the long way around, is to keep busy – keep your mind working learning new things and dealing with old things in new ways.