The Jewish People’s struggle toward independence

One year ago, I began this blog to honor my father’s memory and stay connected with his family and friends, far and wide. Because Israel was near and dear to his heart, today, on Israel’s Independence Day (Yom Ha’atzmaut), I’m sharing two articles Harry wrote for his synagogue newsletter. He was 88 when he filed the original computer documents, dated January and March 2010. Most of us have never seen these articles, and some of us are learning lessons in Jewish history.


The relationships between the Jews and the Arabs in the Middle East did not start with the establishment of the State of Israel. Long before Israel came into existence in 1948, the Arabs were opposed to the growing presence of Jews in the area, known as Palestine. While Jews had been coming to Palestine in small numbers for the past 2,000 years, the numbers started increasing in the late 1800s, when oppression of Jews in Eastern Europe stimulated emigration to Palestine as one of the few places open to them. 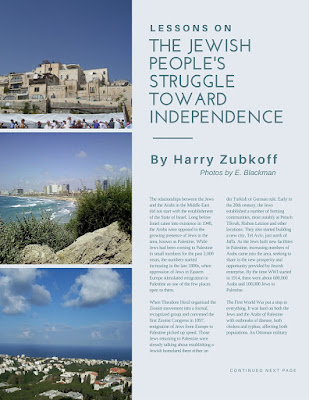 When Theodore Herzl organized the Zionist movement into a formal, recognized group and convened the first Zionist Congress in 1897, emigration of Jews from Europe to Palestine picked up speed. Those Jews returning to Palestine were already talking about establishing a Jewish homeland there either under Turkish or German rule. Early in the 20th century, the Jews established a number of farming communities, most notably at Petach Tikvah, Rishon Letzion and other locations. They also started building a new city, Tel Aviv, just north of Jaffa. As the Jews built new facilities in Palestine, increasing numbers of Arabs came into the area, seeking to share in the new prosperity and opportunity provided by Jewish enterprise. By the time WWI started in 1914, there were about 600,000 Arabs and 100,000 Jews in Palestine.

The First World War put a stop to everything. It was hard on both the Jews and the Arabs of Palestine with outbreaks of disease, both cholera and typhus, affecting both populations. An Ottoman military government ruled the area and was detested by Jews and Arabs alike. The Ottoman Empire joined with Germany and Austria-Hungary against the Allies during the war, and many Jews fled the area to avoid being drafted into the Turkish army. A small group of Jews, however, organized an underground unit that provided critical intelligence information to the British which helped their invasion effort. Their help was but one of many reasons why Britain endorsed the concept of a Jewish homeland in Palestine. At the same time Britain also promised the Arabs a state in the area in return for an Arab revolt against the Ottomans led by T.E. Lawrence (Lawrence of Arabia).

In the spring of 1920, and again a year later in 1921, and eight years later in the summer of 1929, Arabs, who opposed the idea of a Jewish National Home in Palestine, organized simultaneous violent riots and pogroms against the Jews in a number of locations – Jaffa, Haifa, Hebron and Jerusalem. Throughout the decade of the 1920s, other sporadic acts of violence by Arabs against the Jews took place, but never rising to the level of riots or pogroms. As a result, the Jews organized a self-defense force, the Haganah, since the British did nothing to protect them. A major instigator of violence against the Jews was the Grand Mufti of Jerusalem, the foremost Arab religious leader, who later in the 1930s became a Nazi collaborator.

In the late 1920s and through the 1930s, Arab antagonism to the Jews increased dramatically. They claimed that Jewish immigration and their land purchases, though legitimate, were displacing and dispossessing Arabs, even though all the economic indicators showed that the Arabs were benefiting from Jewish investment in the area. In fact, the Arab standard of living in Palestine was higher than in any other area of the Middle East, and Arabs were flocking there in record numbers to share in the prosperity engendered by the Jews.

Anti-Jewish violence was fueled by lies which the Arabs trot out periodically, even to this day, that the Jews were planning to build a Synagogue at the Wailing Wall, and thereby encroach upon the Temple Mount compound and the Al-Aqsa Mosque. The technique of telling lies about the Jews in order to incite violence against them was perfected and expanded by Joseph Goebbels. As Minster of “Propaganda and Enlightenment” for the German Third Reich, Goebbels made lying about the Jews into an art form. “If you tell a lie big enough,” he said, “and keep repeating it, people will eventually come to believe it.” Thus, the Germans came to believe that the Jews were sub-human and perpetrated the greatest atrocity in human history, and the best documented mass-murder rampage. The Third Reich was obliterated in World War II, but the technique of lying about Jews to incite violence against them lives on in the Arab world and in some European states, as well.

A public opinion survey taken in Europe just a few years ago disclosed that Europeans view Israel as the greatest threat to world peace. This kind of public attitude is a direct result of lies repeated relentlessly about Israel’s attempts to defend itself against incessant attacks by Palestinians and other Arabs. The most outrageous lies are told about the Jews: for example, a British report stated that Jews were killing Palestinians in order to harvest their vital organs; a Norwegian report stated that Jews were killing Christian children in order to use their blood to bake matzah, etc. The reporters involved disregard the tenets of their own profession – a search for truth and verification. Indeed, when confronted with questions, they declare that they do not know what is true, only what they are told. In Arab schools today, children are taught from earliest childhood to hate Jews and that their highest goal is to kill Jews and become martyrs. In Arab newspapers Jews are insulted and derided every day so that the Arab “man in the street” is conditioned to hate all Jews everywhere.

Despite Arab objections and British obstacles, Jewish immigration increased substantially in the 1930s as the Germans tightened the persecution screws and Eastern European countries did the same. The pivotal point came in 1936 when widespread riots took place, which were dubbed the Arab Revolt or, in some media reports, the Great Uprising. Fully half of the 5,000 residents of the Jewish quarter in Old Jerusalem were forced to flee and the few Jews remaining in Hebron after the killings of 1929 were also evacuated. The Arabs were not only warring against the Jews, but against the British, as well, and as many as a thousand or more Arabs were killed in the fighting.

In the aftermath, the Peel Commission of 1937 came up with a plan to partition the remaining Mandate area into a small Jewish state and a much larger Arab state. (Remember, more than three quarters of the original Palestine Mandate had already been given to the Arabs for their state, now called Jordan.) Meanwhile, in a further response to the riots, the British began restricting immigration of Jews, despite the growing evidence that Germany had embarked on a program of killing all the Jews of Europe. These restrictions culminated in the British White Paper, issued in 1939, which limited the number of Jewish immigrants into Palestine to 15,000 a year for five years, after which any additional immigration would be subject to Arab approval. In effect, this meant no more would be allowed, a situation which was intolerable to the Jewish people, especially in view of Germany’s inexorable move toward a policy of genocide against them.


*****
Beginning in the mid-1930s and throughout the World War II period from 1939 to 1945, the Arab leadership in Palestine maintained ever stronger ties with the Nazi government in Germany. The wartime cooperation was exemplified by a “fatwa” (religious edict) issued by the Arab religious authority in Palestine for a holy war against England in May 1941. In a meeting with Adolf Hitler in 1941, Amin al-Husayni, leader of the Supreme Muslim Council in Palestine, discussed Britain’s endorsement of establishing a Jewish national home in Palestine. Hitler promised him that he would eliminate the Jews from Palestine after Germany won the war in Europe. During the war, Amin al-Husayni served with the Nazis in the Waffen SS in Bosnia.

Meanwhile, the Jews of Palestine organized a 5,000-man Brigade, which served with the British Army during the war in Europe. After the war, the Brigade succeeded in spiriting thousands of survivors of the Holocaust, the remnants of Europe’s Jewish population, out of that forsaken continent and smuggling them into Palestine, under the noses of the British, who had steadfastly refused to allow Jewish immigration. At the same time, the Jewish leaders in Palestine, the Yishuv, as it was known, decided to make a major effort to bring the Jewish refugees into Palestine. They organized a huge illegal immigration enterprise using small boats and operating in total secrecy. Many were intercepted by the British and detained in makeshift prison camps on the island of Cyprus, but even so, during 1946 and 1947, some 70,000 European Jewish refugees were smuggled into Palestine.

As details of the full dimensions of the tragic slaughter of the Jews of Europe by the Nazis in pursuit of a “final solution” emerged, it had a major impact on public opinion around the world and inspired additional support for the Zionist cause. And Britain, which had restricted every attempt to bring Jewish refugees to the area, finally decided to return its Palestine Mandate to the newly organized United Nations.

The UN recommended that the Palestine Mandate be split into three parts – a Jewish state, an Arab state, and a separate area to include Jerusalem and Bethlehem under UN control. Neither side liked this partition plan, but the Jewish Agency, the de-facto government of the Jews, accepted it and campaigned for it. The Arabs rejected it.

All the Arab leaders in the Arab League objected in principle to the right of the Jews to an independent state in Palestine. But the UN General Assembly voted for the Partition on Nov. 9, 1947, with 33 countries in favor, 13 opposed, and 10 abstaining. The official partition was scheduled to take effect as soon as the British withdrew from the area, on May 15, 1948.

Almost as soon as the UN Partition vote was announced, the Arabs started carrying out attacks against the Jewish population. The consulates of countries that had voted in favor of the Plan were attacked, bombs and Molotov cocktails were thrown at shops and cafes, synagogues were set afire and many businesses looted.

On May 14, the day before the British Mandate expired, David Ben-Gurion announced to the world that the State of Israel had been established in accordance with the UN Partition Plan. As required by the UN’s resolution, Israel agreed to ensure that all its inhabitants would enjoy equal social and political rights, regardless of race, religion or gender.

You can find several other articles about Israel in previous posts on this blog.

Posted by Harry and Elaine at 8:11 AM