Memories from the War, the Eisenhower years 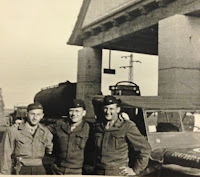 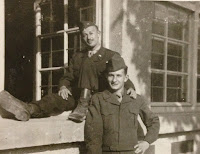 In honor of Holocaust Remembrance Day (or Yom Hashoah) on May 5, I’m posting a note Harry wrote to an individual 50 years after his Army service ended. I found the note, plus another one on the Eisenhower years, in Harry’s computer files. I believe both are worth sharing for history’s sake. Harry’s loved ones will enjoy these photos from his time in Germany. (I will not post the gruesome Holocaust photos also in his collection.) 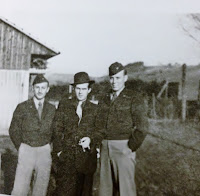 In every photo, Harry is on the left. 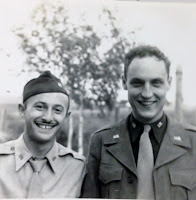 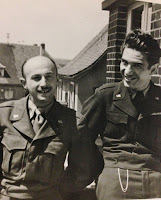 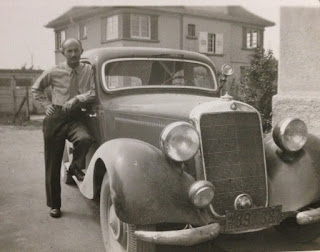 Holocaust reflections
In November 1996, Harry wrote to someone (unknown) with a few details on World War II and concentration camps. He had served with an Army mission to hunt down Nazi war criminals and gather evidence for the Nuremberg Trials. (You can read about his experience in an earlier post on this blog.)

When the Allies invaded the continent of Europe in June 1944, the Russians were already moving west toward Europe’s heartland. A great many Germans could see the handwriting on the wall and started making preparations for their inevitable defeat. The Russians were the first to come across the concentration camps, most of them in eastern Poland, and the word started to spread about the horrors they were finding. By the way, most people only hear about the major camps and believe there were only about a dozen or so. The truth is, there were several hundred camps, all of them competing to see who could kill the most people in the shortest period of time. Anyway, those Germans who could see ahead, wanted to avoid the Russians, realizing that the atrocities the German armies had inflicted on the Russians the previous year were about to be returned by a vengeful Russian army. Hundreds of thousands of them fled westward, hoping to be captured by the Americans.

Starting in October/November 1944, about six months before the war ended, some Germans decided to hedge their bets, so to speak. They would pick the strongest or healthiest young Jews, mostly young women but some men, too, who could be expected to survive under the harsh conditions they would face until the war was over, and help them to “escape”. They would also provide shelter, such as it was, and some food – enough to keep them alive. The survivors could then testify, if need be, to the fact that their benefactors had saved their lives. True, it was a risk for them – they could perhaps be sent to the camps themselves if caught. But it was a calculated risk, and for most of them it paid off. It’s also true that there were some righteous people among them who acted for humane reasons, but not very many.

When the invading armies got close, the Germans who were stationed at the camps almost all fled, tearing off their uniforms and joining the thousands of refugees streaming along the roads. Your grandmother was one of hundreds of similar survivors we found at that time, all with similar stories to tell. What had happened to them was terrible, worse than anyone in your generation can ever imagine. But what happened to them in the immediate aftermath of the war, at the hands of us Americans, was enough to break your heart. I don’t think that part of the story has ever been adequately told. You should ask your grandmother what happened after she was freed, and how she found her way to America.


The Eisenhower years
In March 2010, Harry jotted these thoughts to someone (again, unknown). He refers to Presidents Eisenhower and Truman, Secretary of Defense George Marshall, and Senator McCarthy. History buffs may especially appreciate this. (You can read about his experience during the McCarthy era in an earlier post on this blog.)

This is my understanding of Eisenhower’s treatment of Marshall. Senator McCarthy, whose claim to fame rested solely on his fiery anti-communism and his accusations that there were communists in the State Dept. and the Defense Dept. (though he never, never once, named one), attacked George Marshall. He called him a man “steeped in falsehoods” and accused him of harboring communists in the State and Defense Depts. and of catering to Russian requests, etc. etc.  Eisenhower, who owed his career to Marshall, and was now the Republican candidate for President, had ignored McCarthy while he was an Army officer, but as a political candidate he had to take a position. I got this from the speech-writing fraternity (a small world in the government, especially at State, Defense and White House).

While campaigning in Wisconsin, McCarthy’s home state, Ike had a prepared speech defending Marshall in strong terms against McCarthy’s charges. But, when it came time to use it, he gave the speech but left out all references to Marshall. He did what all politicians do, he backed away from a fight he thought he couldn’t win – and to hell with principle. The newspapers all commented on it, and I remember that TIME magazine especially gave him a hard time about it. But, what the hell, he won the election and became President – twice, two terms. But he could have stopped McCarthy a lot earlier. As it was, McCarthy figured he had nothing to fear from Eisenhower, so he went ahead to accuse the Army of harboring communists and started holding hearings. That’s when Eisenhower finally decided to stand up and fight – now he was President. Those famous hearings were televised and drew the biggest TV audience ever – up to that time – 1953, I think. McCarthy was finally discredited, later reprimanded by the Senate, and died in disgrace.

But Ike never defended Marshall. He resigned as Sec/Def in 1951, while Ike was campaigning for Pres. The scuttlebutt was that Truman wanted him to stay on with the expectation that Ike would also ask him to stay on if he were elected, but Marshall declined and – get this – because he did not want to put Eisenhower in the embarrassing position of deciding whether to keep him on or not.