When it came to Israel, Harry used to mention that certain news media got their stories all wrong. He had a chance to make stories right in articles he wrote for his synagogue newsletter. He also enjoyed sending articles from his trusted news sources via emails to family and friends. In a way, he was our trusted news source.

Harry wrote the following article in April 2010. It makes sense to share it now because the circumstances when he wrote it six years ago are amazingly similar to those today. His comments still apply, too, except Secretary Kerry is in the place of Secretary Clinton.

I took the photo in the graphic below when I visited Israel, coincidentally in April 2010. 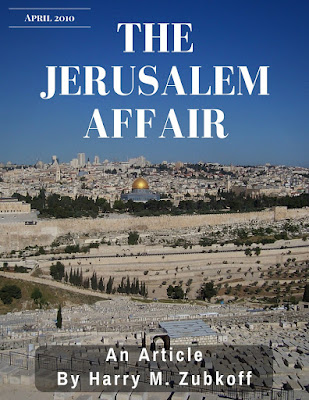 A funny thing happened on the way to the peace process. Well, funny may not be the right adjective. Looking back (it was just a month ago, in March) it seems surreal. It started with VP Joe Biden scheduling a trip to Israel advertised as an effort to reassure the Israelis of America’s continuing support and friendship for the Jewish state. Such an effort was deemed advisable because the warm relationship between the two countries that had existed during the Bush administration was obviously deteriorating. Mr. Biden’s good-will trip, however, ended with the most serious crisis in American-Israeli relations in several decades. It was triggered by an announcement of Israeli government approval of a 1,600-unit apartment project in East Jerusalem’s Ramat Shlomo neighborhood.

There are other Israeli housing units in this part of East Jerusalem, as well as Arab housing units, although the Arabs regard this area as “disputed territory”, which means its status has yet to be negotiated. Of course, the Arabs regard all of Israel as disputed territory and have thus far even refused to recognize the legitimacy of the Jewish state itself. As for this area of Jerusalem, populated largely by a community of Orthodox Jews, it complies fully within Israeli policy guidelines, and both the U.S. and the Arabs were aware of it. In fact, PM Netanyahu, who back in October had announced a 10-month freeze on settlement building in order to bring Palestinians back to negotiating, had specifically excluded Jerusalem from the freeze. Jerusalem, he had declared, is not a settlement. Secretary Hillary Clinton had understood and accepted his declaration and even praised his “unprecedented concessions” in imposing a temporary construction freeze on settlements.

There is no doubt that the announcement of this building project while VP Biden was visiting was incredibly stupid, and PM Netanyahu delivered an abject apology, both privately and publicly. But was it a gaffe or an insult to America, so grave as to precipitate a genuine crisis and a permanent rift in American-Israeli relations? The unusually harsh language that Ms. Clinton and the State Dept. used would seem to indicate so. State Dept. spokesman Philip Crowley made it clear that Israel’s actions “undermined American interests”, and he reported that Secretary Clinton now felt that it was up to Israel to show that it was committed to our bilateral relationship not through words but through specific actions. America’s angry reaction to this incident has also emboldened the Palestinians to back away from the peace talks once again – the indirect peace talks, since they simply refuse to negotiate directly with Israelis.

Interestingly, American spokesmen have never spoken so harshly to the Arabs or the Palestinians as they have to their “friends and allies”. Some of the most knowledgeable observers of American political and diplomatic behavior have noted that the escalation of tensions with Israel is not simply the result of a misunderstanding or of events spinning out of control, as sometimes happens unexpectedly. On the contrary, it seems to be premeditated and calculated, and if it had not been this housing project announcement, another excuse would have been found. It seems obvious to them that the current American policymakers look upon the Israeli-Palestinian conflict as undermining American interests in the Middle East and that Israeli housing projects are impeding the peace process.

So it all comes back to the so-called peace process. America sees it as in its best interests for the Israelis and the Palestinian Arabs to agree on a peaceful solution to their conflict by establishing a Palestinian state alongside the Israeli state. Forgotten is the fact that more than three-quarters of the Mandate land that the League of Nations had designated for a Jewish state had already been given to the Arabs for their own state. That state is now called Jordan. Overlooked, also, is the fact that the Arabs have consistently refused to establish another state alongside Israel, a fact that American policymakers seemingly cannot grasp. What the Arabs of Palestine want is the elimination of the state of Israel, another fact that American policymakers seemingly cannot grasp. To look upon a housing project in Jerusalem, the Capital of Israel, as an obstacle to peace seems very strange when dozens of rockets launched by the Arabs of Gaza against Israeli civilian targets do not raise similar concerns.

The American policy rests on a faulty assumption. It is not settlements, construction, or housing projects that are obstacles to peace. It is the Arab refusal to negotiate directly with Israel over the terms of any agreement; it is their resolute refusal to accept the very existence of Israel as a Jewish state in the region; it is their unwillingness to accept the idea of any Jews residing in any area that might someday be a part of their state; and it is their unwillingness to establish a state alongside the Jewish state. Over the years they’ve had many opportunities to do so and always refused. Three times they have gone to full-scale war to eradicate the Jewish state instead. Each time they lost. They have persisted in dozens of smaller-scale hostilities and lost those, too. And still, there are those among us who continue in the mistaken assumption that Israel is sabotaging the peace process, and that if Israel will only stop building new apartments or expanding settlements, peace will ensue.

Over the years America and Israel have devoted time and effort into building a strong and mutually beneficial relationship. The freedom that the peoples of these two countries enjoy has provoked those who cannot abide the notion of liberty to perpetrate acts of terrorism against them both. Israel and America are opposed by the same enemies. In the face of a common enemy, the two countries have formed a union of joint effort in military training and intelligence gathering and sharing, and close cooperation in many areas of research and weapons development that have strengthened both. This is what makes the U.S. attitude toward Israel so puzzling to Middle East analysts. It is sad but true that Israel has only one friend in the world today – the United States. Without this powerful friend, Israel cannot long survive in an unfriendly world. And this friendship rests on a foundation that is no longer firm and solid, as it has for the past half century. To preserve and strengthen this friendship for the next half century and beyond is our first priority now.