Opinions on change, criticism and clarity 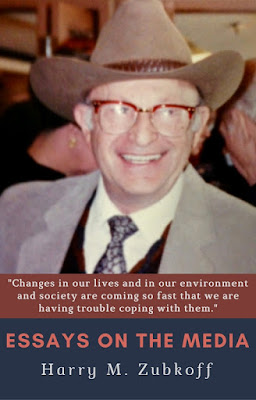 After a 36-year career in the federal government, Harry walked away in 1986 as an expert in his field, the media. But he never stopped writing about the media. I uncovered these 1991 essays in a collection on his computer. They may interest media folks and government communicators, as well as entertain his friends and family. I think he would have liked that.

America will be a great place – if they ever finish it. Comedians used to say that every now and then, and it would invariably get a laugh. Sometimes, driving through almost any city in the country, and seeing all the construction going on in office buildings, apartment houses, shopping malls, new roads, etc., that line comes to mind again. It’s what is called an inverted truism. The truth is, of course, that America will never be finished. We will be building it, building upon it, and rebuilding it forever – and not only its physical structure, but its institutions, its values, its very culture, as well.

Our society is constantly evolving and the pace of change is rapidly increasing. In earlier generations, say fifty or sixty years ago, changes were coming much more slowly and people were able to adjust, to adapt to change, to get used to things for a while before they phased into something else. Not anymore. Changes in our lives and in our environment and society are coming so fast that we are having trouble coping with them. They frighten us. We wish, sometimes, that we could slow down the world for a while, till we catch our breath.

Sixty years ago, in the 1940s, an eighth-grade education was enough to qualify people for most jobs in our society. Fifty and forty years ago, in the 1950s and 1960s, a high-school education was enough. In fact, only about 15 percent of our youth graduated from high school in the immediate post-World War II period and less than 10 percent of them went on to college. But the evolving needs of science and technology have changed all that. Today, most jobs in our society require a college degree in order to earn a living wage with any hope of advancement to positions of responsibility and authority. In fact, a large proportion of the worthwhile jobs require advanced degrees. As a consequence, some 75 to 80 percent of our youth today graduate from high school and some 60 percent of them go on to college. That alone represents a great sea change in American society.

Military public affairs officers, whose business involves dealing with the media on a daily basis, are frequently critical for what reporters regard as the wrong reasons. For example, the media has come under attack for writing about the erosion of benefits for service men and women, such as cutting back on commissary and Base Exchange privileges, or making changes in the retirement system. Not only do articles like that make the recruiting job more difficult, but they are bad for the morale of those who are already in the service, and they discourage people from reenlisting when their tours are up. But surely, reporters respond, the military cannot seriously expect the media to refrain from reporting such developments, simply on the grounds that to do so would have a negative effect on recruitments or reenlistments. Such criticisms are grossly unfair, they charge, since the very nature of the reporter’s job is to purvey the news to the public.


* * *
It is a cliché among meteorologists that there is no such thing as bad weather; there are merely different kinds of weather. The same thing is true of news; there is no such thing as bad news, merely different kinds of news and, in journalism, all the news is fit to print. That’s the simple view, the simplistic view. The truth is that in journalism, as in any other business, someone makes decisions a hundred times a day or more as to what to do and what not to do, what to write and what not to write, what to include and what not to include, etc. And everything that reaches the public through the media is going to impinge on the public consciousness and influence the public behavior.

Here are two examples of how communications can miss the mark. The first is a directive put out by the White House – by one of those bright young presidential aides, no doubt – during World War II:  “Such preparations will be made, as will completely obscure all Federal buildings and non-Federal buildings occupied by the Federal Government during an air raid for any period of time from visibility by reason of internal or external illumination. Such obscuration may be obtained either by blackout construction or by termination of the illumination. This will, of course, require that in building areas in which production must continue during the blackout, construction must be provided that internal illumination may continue. Other area, whether or not occupied by personnel, may be obscured by terminating the illumination.”

When the President saw it he blew his stack, according to some eyewitnesses. Exasperated, he wrote the following correction in the margin: “Tell them that in buildings where they have to keep the work going, to put something across the window. In buildings where they can afford to let the work stop for a while, turn out the lights.” In other words, use plain English!

The second example is about the plumber who wrote to the National Bureau of Standards to tell them how useful hydrochloric acid was for cleaning out clogged drains. The Bureau wrote back: “The efficacy of hydrochloric acid is indisputable, but the corrosive residue is incompatible with metallic permanence.”

The plumber replied that he was happy that the Bureau agreed with him. So the Bureau tried again, writing: “We cannot assume responsibility for the production of toxic and noxious residue with hydrochloric acid, and suggest that you use an alternative procedure.” And again the plumber expressed pleasure that he and the Bureau saw eye to eye.

Finally, a sharp young secretary at the Bureau sent a message that got through: “Don’t use hydrochloric acid,” she wrote, “it eats hell out of the pipes.”