A tearjerker – and dream songs – to remember

Did you see the movie “An Affair to Remember”? Note to young people: Watch it! I saw the Cary Grant version many times in my youth. Harry discusses the movie’s music in the first of two articles below. He wrote the articles for his community newsletter in Leisure World, Silver Spring, MD.

There are so many memorable songs that it’s hard to choose which one to write about each month. Sometimes I choose because the melody is stuck in my mind. Sometimes it’s because a song is associated with a person I’m thinking about. And, sometimes, like today, it’s because the lyric strikes me and I can’t let it go. Consider this couplet, for example: “Dreamers tell us dreams come true. It’s no mistake. And wishes are the dreams we dream when we’re awake.” Let that thought roll around in your mind for a while. I think it’s one of the most profound thoughts ever expressed in popular music lyrics.

What brought it to mind was that I caught a glimpse of an old movie, while surfing on TV recently, called “An Affair to Remember”. It starred Cary Grant and Deborah Kerr. A real tearjerker. Well, that movie was made in 1957 (good grief, more than 50 years ago). But that movie was a remake of an older movie called “Love Affair” that was made in 1939 (good grief, more than 70 years ago). It featured Irene Dunne and Charles Boyer in the starring roles. In the original movie, Irene Dunne sang the “wishing” song, written especially for that movie, words and music by Buddy DeSylva – the Tin Pan Alley/Hollywood songwriter I’ve talked about in previous columns. That movie, by the way, was nominated for the Academy Award for Best Picture, Best Actress, Best Supporting Actress, Best Writing, Best Original Story, Best Art Direction and Best Original Song.

Just to prove that Hollywood knows a good thing when it sees it, it tried another remake in 1994 with another “Love Affair” starring Warren Beatty and Annette Benning. Same storyline, etc. I didn’t see that one. Two out of three is enough. Anyway, it was Irene Dunne who got me started on wishing and dreaming and marveling at lyrics that made sense. 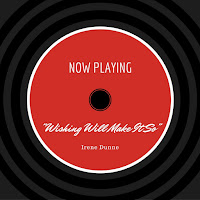 Usually, a successful songwriter has several big hits to his credit. Rarely do you hear of a writer with only one big hit, but once in a while, one comes along. His name was Michael Edwards and his one really big hit was “Once In a While”, published in 1937. Tommy Dorsey’s recording that year went to Number One in the country and Patti Page’s recording some fifteen years later, in 1952, also hit the top of the charts. Again, in 1968, Ella Fitzgerald also had a big hit with her recording; Elkie Brooks had a big hit with it in 1984; and Eddie Vetter did it again in 2011. So, it’s still being heard now and then – once in a while. Michael Edwards was a classical violinist, organist and music arranger, and this song was his one and only major composition.

The lyricist, Bud Green, on the other hand, had written many lyrics and had collaborated with a great many composers and other writers, including Buddy DeSylva, Les Brown, Ray Henderson, Al Dubin, Harry Warren, and others. Among his most successful songs was “Alabamy Bound”, “That’s My Weakness Now”, “I’ll Always Be In Love With You”, “Flat Foot Floogie With a Floy, Floy”, “Sentimental Journey”, and many others. He was inducted into the Songwriters Hall of Fame in 1975.

Like so many other American songwriters, Bud Green was born in Europe (Austria) and came here as a child. He grew up in Harlem at the beginning of the 20th Century and started writing songs when he was still in elementary school. Aside from his success as a lyricist, Bud Green became famous as a symbol of the “Flapper” era. His song “That’s My Weakness Now” became a huge hit for Helen Kane, including the phrase “Boop Boop-a-Doop”. That song and that phrase and Helen Kane’s rendition became the inspiration for Max Fleischer to create the Betty Boop cartoons that burst on the world in 1930 and that are still with us today.

Once In a While (Lyric)

In love’s smoldering ember, One spark may remain, If love still can remember, The flame will burn again. I know that I’ll, Be contented with yesterday’s memory, Knowing you’ll think of me, Once in a while.