My father’s advice: How to play the personnel game 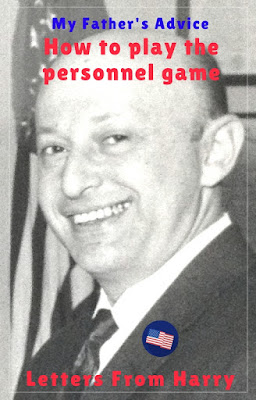 On Sunday I’ll turn 65 (oh my!), so I thought it fitting to post a letter my dad wrote to me. In 1975, I was a college graduate living in northeast Atlanta and working downtown as a secretary in the Administration on Aging. I saw the job as my entry into the federal government, while updating my resume (aka 171 form – now obsolete) with plans to move into a professional “series”. Evidently I sent the form to my dad for his opinion because recently I came across his reply, which I now vaguely remember. It contains the sort of fatherly advice he offered freely throughout my career. I’m showing it off now as another example of Harry’s generosity-driven letters – and how he felt about the bureaucracy. By the way, his general advice is not obsolete, so feel free to pass it around.

I’ve looked over your form 171 closely, and I really think you should do the whole thing over. From the point of view of an employer who interviews dozens of people each year for a variety of clerical and professional jobs, I can only tell you how I feel about these applications … but I can also say that I’ve spoken to many other supervisors and all have expressed the same sentiments.

Briefly, then: 1. A form 171 that has obviously been doctored up to reflect your current status is looked upon as a “lazy man’s (woman’s) application.” A freshly made-out form, on the other hand, reflects a serious desire to impress a prospective employer, and he is, therefore, more inclined to take it seriously. 2. In many ways, the government application form is something of a game; both the applicant and the employer know that it contains exaggerations, that it stretches the truth to some extent in order to make the applicant’s previous experience seem more important than it, in fact, was, and that it presents the applicant as a prodigy of virtue whose talents are precisely tailored to the job at issue.

The question, then, is how well do you play the game? If you play it well, it reflects the fact that you displayed a considerable degree of advance preparation and self-discipline in making yourself a saleable commodity. So – let’s face it, the 171 is what you’re judged by, since no employer is a mind-reader and no one can evaluate your attributes by looking into your eyes. Of course, the interview is an essential part of the judging process, but you may never reach the interview stage if your 171 doesn’t impress both the personnel office and the prospective employer.

Now, as to your conduct on the job, I know you have received conflicting reports or opinions, particularly as regards your chances for advancement into professional responsibilities and higher grades. Well, no matter what others may tell you, believe me when I say that such things as a willingness to work, an openly exhibited (cheerful) desire to master all aspects of your job, and an obvious ability to accept and discharge more demanding duties and responsibilities – all these are very rare indeed, and when an employer encounters these things he is quick to note and equally quick to reward. I can cite plenty of cases where people moved from clerical to professional fields because their performance impressed their supervisors.

So – ask yourself, have you displayed those characteristics? When you’re not busy, do you ask around to see if you can help anyone else? Do you seek out work, or do you wait till it’s handed to you? Have you told your supervisor(s) that you are willing to do more and want more responsibilities? And do you actively try to learn everything there is to know about your office, its larger roles and missions, how it fits into the overall organization, what it’s supposed to produce and what it’s actually producing? Can you discuss intelligently what problems your boss and his boss are wrestling with or worried about – and can you make any suggestions to them as to how to improve their organization and their operations?

My own feeling about people who work for me is that it takes them 6 to 8 months – and then, if they don’t come to me with questions to show they’re thinking and/or suggestions that indicate they want to use their talents to help me, well, they’re missing the boat. And that’s the real difference between clerical and professional personnel – between a secretary who will always be a secretary and a secretary who is going to advance into the professional levels. The difference is how much thought and effort you devote to your specific job and your entire organizational efforts.

Now, having said all that, I still think it’s a good idea to keep your applications circulating and your senses tuned to better possibilities. That’s why you need to fill out a new application form and send it out to all the likely places. You should ask your personnel office for all HEW Job Announcements for which you (not they) think you’re qualified so that you can submit an application for each. You should ask the Atlanta office of the Civil Service Commission for Job Announcements in other agencies, and apply for them as well. But, while you’re doing all that, you should be doing everything you can to convince your boss that you’re the smartest and hardest working person he ever had and that if and when you leave he’s going to be the sorriest guy in the world for not hanging on to you. And the way to do that is to take on responsibilities and do so many things that they’ll need two people to replace you.

As to the application itself, here are a few random thoughts: 1. Remember, personnel people are triggered by certain key words and phrases, so they should be used (judiciously) in all job descriptions. These things also impress supervisors or employers. For example: you don’t simply type letters, you compose correspondence; you don’t simply type reports, you draft reports, you provide editorial assistance in the final preparation of reports on (what? the problems of the aging? the use and abuse of dangerous drugs? the love life of the lemming?); you don’t simply research pertinent material relevant to special projects, you exercise initiative in researching pertinent material (where? libraries?, other organizations in HEW?, other agencies?, state and local governmental facilities?, industrial and academic resources?, etc.?), you select the most significant material for inclusion in the report and you integrate it into the substance of the report; and the “special projects” are what? – things such as the absorption of college graduates into the establishment? or whatever!

In other words, no matter how simple or trivial your job – any job – may have seemed to you, you have to write it up as though it were an important and essential operation without which the office or the organization could not have fulfilled its mission. What you’re doing, in effect, is demonstrating to a prospective employer that you are a unique and precious individual (which you are, of course) who is capable of making a real contribution and whose presence in his office will be a valuable addition to his staff. As I see it, your present job should be expanded to 3 or 4 times its present length (which means it must be continued on a separate sheet); and that applies to all the jobs you list. Even your Kelly Girl job can be expanded to indicate what kind of organizations you worked for and how much you did for them and how valuable the experience was in preparing you to do an outstanding job for whoever hires you next.

I just can’t emphasize strongly enough how important I think all these things are in your application form; I honestly believe they often make the difference between being hired or not.

If all this sounds a little pompous to you, blame it on my bureaucratic conditioning. I have been fighting against the “bureaucratic mentality” all my life – but from within – so it’s poetic justice that I should be a victim of the system, after all.

Anyway, bear this in mind, too. When I said the government application form is a game we play, I meant it; unfortunately, it’s the only way to get in. Once in, however, the game becomes more subtle; the same sort of garbage continues to go on between the employee and the personnel office (otherwise, personnel people would have very little to do), but between the employee and his supervisor that part of the game is meaningless. The objective, as I said before, is to take on all the duties and responsibilities you can get, regardless of whether they’re spelled out in your job description or not; then, some day, when the personnel officer/position classifier comes around to do a desk audit of your job, she’ll be so amazed at the extent of your activities that she’ll classify your job at a higher grade, which will astonish your boss, as well. At least, that’s the way it should work if your personnel office is honest – which may be too much to expect. Still, the system does work and if you persevere, you can beat them at their own game.

In the interests of speed, I’m sending this letter out right away so that you can get started on a new application. By the time you get to the references, I’ll have Jenny Klein’s and Nora Levsky’s job titles for you to fill in, as well. And, as soon as you complete it (but don’t sign it), and return it, I’ll make a few dozen copies for you. When you send it to me, use one of these address labels (enclosed).

P.S. Thought you might like to see an article I wrote, to be published some time in December, I think.