On Halloween in 1950, Harry walked into the Pentagon to start a career that spanned 36 years. So it's fitting that this Halloween we can see (and hear) his quotes that honored the day he walked out. I remember the excitement when a TV station featured his retirement -- after The Washington Post scooped the story. Now I've discovered that more newspapers ran with the lead. So here's a glance at Harry’s retirement hoopla, which is news to most of his family and friends who follow this blog.

On June 3, 1986, “Eyewitness News” interviewed Harry for a segment on WDVM TV in Washington, DC. The clowns in the first scene were his long-time friends who managed a timely surprise! Click here for the video on YouTube. Or you can watch it here (though it may not appear on your mobile device):

MAUREEN BUNYAN:  The publisher of one of Washington’s best read dailies and most influential newspapers is stepping down. Harry Zubkoff, editor of the Defense Department’s most popular publication, is calling it quits after nearly four decades. Andrea Roane reports.

ANDREA ROANE:  The atmosphere at the Pentagon is usually much more subdued than this, but an exception was made today for Harry Zubkoff. After 36 years as chief of the Pentagon’s news clipping and analysis service, Zubkoff is retiring. In that position, this man who thinks of himself as just another government clerk served as publisher of the Current News, Early Bird, and other source information for high-level Pentagon officials. In 1950, when Zubkoff started with the Early Bird it was just one or two pages long filled with pertinent news clippings for a half dozen officials. But it has grown substantially over the years.

HARRY ZUBKOFF:  We now clip probably 65 newspapers every day, well over 300 periodicals a month, and we provide literally hundreds of pages of things, clippings, stories, for the people to look at who are in a – are decision makers.

ROANE:  Almost 20,000 people here and abroad read Zubkoff’s Early Bird edition. Defense Secretary Weinberger starts off his day with it. So do the folks in the White House and lawmakers on Capitol Hill.

ZUBKOFF:  What the media are saying about defense policy, strategies, doctrines, programs, weapons acquisitions, everything that they have to take into consideration in the formulation of our national defense policies.

ROANE:  Modestly, Zubkoff believes his stepping down won’t change anything in his department, but his colleagues disagree.

ROANE:  Can he be replaced?

ROANE:  In retirement, Zubkoff says he plans to write a book or two. They won’t be the kiss and tell variety about the Defense Department but rather about something he knows very well after 36 years, the media. Andrea Roane, Eyewitness News.

Now for Harry's quotes in three newspapers, with snapshots of seven. 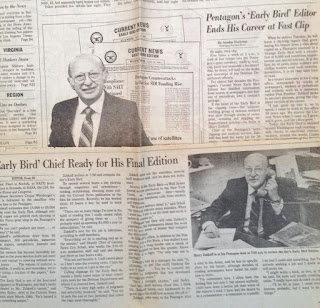 "There are so many things I'm now in the habit of reading that I really cannot relish the prospect of giving them up ... I'll probably wind up spending $1,000 a year on subscriptions." (That explains why he did just that for the rest of his life!)

"I'm sometimes torn. I often have the feeling that not only I, but almost anybody, could have done a better job than some of the reports I read. I have had the desire to be a commentator -- a columnist or a pundit. I do feel I could add something. But I'm not actively seeking a job and I doubt anyone will invite me. I might write a book, or two, or three. I really have not decided on anything ... I'll be 65 in June. I could stay here forever, probably, but I want to do other things." 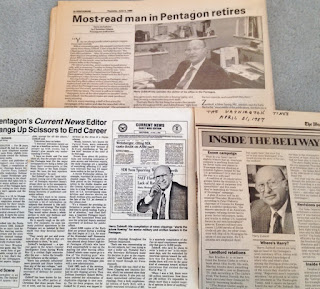 "The Current News does provide sort of an Inspector General-type 'eye' for the secretary [of defense]. In stories that we pick up, we will call his attention to something that is happening out in the field someplace that may eventually really create a problem. This will often be the first indication that this problem exists. Then, he can call in his staff and say, get me the lowdown on this."

"There is never a story in any newspaper that is free of errors."


Army Times, June 16, 1986:
"I have no doubt, and I've read them all, that the people who cover the Pentagon beat [for the major newspapers] are doing a better job than their counterparts at the White House or the State Department. We have the best reporters in the business." 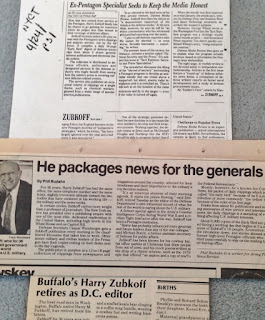 But the "good information coming out the typewriters" of Pentagon reporters doesn't always show up in the newspapers ... "They don't want to be innovative, to startle their readers, to concentrate a lot of information on subjects that demand it, like military policy and strategy. That might bore their readers, they think. They would rather devote a whole section to style and fashions and gossip and society."

Doubting there will ever be the same kind of consensus toward military operations that existed during World War II, Harry said: "When I was a kid, there were 120 million Americans. Now there are 240 million. It's impossible to obtain more than a modest majority of opinion in favor of anything."