Rhymes for the bosses, with words of wisdom in all

Most of Harry's family and friends knew nothing about his reputation as a poet throughout his 36-year career in the Defense Department. So here's a taste of why he was dubbed the "Pentagon Poet Laureate." I selected three bosses because I remember my dad talking about them. 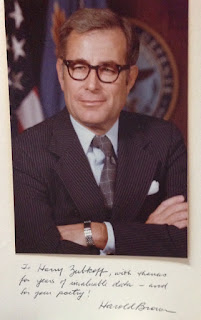 The Secretary’s role is not so easy to define,
He keeps the programmed forces and the budget all in line,
He formulates the policies, and analyzes trends,
In short, it’s not a job in which to make a lot of friends!

His mind must be receptive to a host of different things,
From the nuts and bolts, the details, to the systems’ functionings,
On which to base decisions that result in strategies,
In short, it isn’t hard to make a lot of enemies.

And yet, throughout your tenure, you have won our deep respect,
For pronouncements and decisions, both direct and circumspect,
You have helped to shape the nature of the future generation,
And in doing so have fully earned our deepest admiration.

But even more importantly, please bear this thought in mind,
You have left a goodly host of U.S. Air Force friends behind,
And somehow we look forward to a brighter future, when
You’ll return once more to government, and we will meet again.

Harry was right! In this letter, dated December 30, 1976, he welcomed back his boss:

When you left, almost eight years ago, you may recall that I wrote you a little farewell poem. It is only fitting, therefore, that I write a welcome-home poem now. So:

On behalf of those who populate the Pentagonic maze,
Who occupy the back rooms half the nights and all the days,
Let me welcome your return as the commander of our fort,
And assure you that you have both our respect and our support.

We'll be keeping you apprised of what's occurring in the press,
(A fact which might contribute to your quotient of distress.)
And throughout the coming crises that inevitably rise,
We will round up all the comments, both the foolish and the wise.

So don't lose your sense of humor and, whatever your desire,
We will help in any way we can to put out every fire,
And while formulating policies and solving problems, too,
Just remember, let your inner warmth, from time to time, shine through.

Five days later, Dr. Brown wrote this reply on a copy of the poem:
"Harry Z, Thanks for this superlative effort and the advice. It reminds me that though most of the work is oppressive many of the people here are nice! H.B." 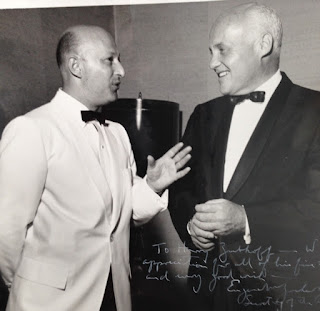 When the man of the hour acceded to power,
And you were confirmed in this job,
You found a whole host of old friends and old ghosts,
In fact, you confronted a mob.

This place was a literal beehive of guys
Who remembered the old days of yore,
When they were one quarter of their present size,
That is, when you served here before.

They thought of the days when you wielded the whip,
When you cracked down on spenders galore,
When you helped form the structural shape of this ship,
When you crammed with the cream of the Corps.

Small wonder, old friend, that they welcomed you back
With a cheer and a sigh of relief,
For here was a pro in the business we know,
To steer the ship clear of the reef.

Your basic approach to the job as our coach,
Has confirmed our opinion of you. From
The day that you left to the day you returned
It is obvious, too, that you grew, some.

We hasten to say with a note of dismay
That each morning you’re not a slow starter,
And though we complain of the pain and the drain,
We all find ourselves working harder.

So let us conclude with sincere gratitude
And on one thing we all will say “Yes,”
We’ll never get sore while you’re minding the store
For you are our boy, we confess!

We’re glad that you’re here on birthday this year
And we hope that you always will be,
So each year on this day we can greet you this way
HAPPY BIRTHDAY TO YOU, MR. Z. 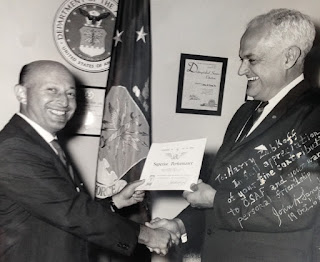 The time has come to say good-bye, as come it must, at last,
And never did some seven years fly by so very fast,
So pause with me and see if we together can review,
The golden years of John A. Lang, and of his happy crew.

So many things have happened in so short a span of time,
That we can only capture but a few of them in rhyme,
For you have filled the passing years with so much work and fun,
And never did so many owe so much to anyone.

Now all of us remember who recruited you, you see,
Our former boss, the Secretary, known as Mr. Z.,
But tell use, did he twist your arm before you would agree?
Or did you volunteer to take this job quite willingly?

And all of us remember, for a year you wore two hats,
And set a pace of action that would kill us normal cats,
You also had both Frank and Ray, a pair of great execs,
And both of them, we have to say, wound up as total wrecks.

And all of us remember that in any given week,
You reluctantly accepted invitations that you speak,
No, there weren’t very many, just a million words or two,
Which we bound up in four volumes as a souvenir for you.

And all of us remember all the many jokes you told,
For sometimes we would hold our breath to hear how they unfold,
And some of us remember just as clear as yesterday,
The never-ending research to find something new to say.

And all of us remember every trip you had to take,
The times when you were gone we didn’t have to stay awake,
But you surely led Bill Richardson a very merry chase,
As you charged through every speaking trip like speeding through a race.

And all of us remember all those meetings with your staff,
When each dreary Monday morning would produce at least one laugh,
For you spent the time critiquing what we did the week before,
And with humor in predicting what the next one held in store.

And all of us remember in deciphering your scrawls,
With just a few, short scribbled words you’d have us climbing walls,
And the colorful expressions with a twinkle in your eye,
Can you repeat the one when you were called to testify?

And of us remember that when things did not go right,
When the prospects looked quite dismal and the future less than bright,
We could always count on you to turn a frown into a smile,
And to make us feel much better, if for just a little while.

And all of us remember, you reminded us each day,
That a love of flag and country is what made the U.S.A.,
We salute you as a gentleman who really loves this land,
For your patriotic fervor you deserve a hearty hand.

And all of us remember, when the flag becomes unfurled,
That the State of Carolina is the center of the world,
And to take it one step further, it was so ordained by Fate,
That the little town of Carthage be the center of that State.

Yes, all of us remember many things we cannot say,
For memories come flooding back when you are gone away,
But this we know and this we say, we’ll miss you very much,
And this we hope, and this we pray, that you will keep in touch!


Hundreds of people who knew Harry at the Pentagon received a poem at one time or another. (I know because I now have copies.) And, they probably saw his annual "Season's Greetings" poems to all in the Defense Department -- stay tuned; I'll post one down the road. And, did you know Harry submitted rhymes to greeting-card companies, Hallmark for one? I'll save those for later, too. Next week I'll get back to his "regular" writings.