Once a poet, always a poet

I never asked my dad to name a favorite poem or a poet who inspired him. I have a hunch, though, that his poem-writing flowed without influence from the greats or anyone else. One thing's for sure -- once he started, he never stopped. Only in the past year have I learned the extent of his poetry -- about people he knew, places he went, events of the day, and just ordinary thoughts that drifted through his mind. Even when he wrote a Letter to the Editor, he did so in rhyme! Harry submitted the four poems below in the 1960s, each to a different publication.


Harry might have submitted this one to FLYING magazine, which still publishes.

The question that I often hear,
I’ve asked myself the same.
Is Zero Defects’ meaning clear,
Or is it just a name?

Can this apply to us? I said,
Or should we pass it by?
Is this alive or is it dead?
I wonder – so said I.

I pondered it, by day and night,
And really thought it through,
And in the end I thought, they’re right.
This is the thing to do!

For none of us is perfect, see?
This thought occurred – in rhyme,
Not him, or her, or you, or me,
We’re not right all the time.

And leave us all get on the ball,
Let’s shift our gears to high.
And let’s support it, one and all,
Let’s do it right – let’s try.


In August 1965, Harry wrote this letter to The Washington Post columnist Bill Gold.

Dear Bill:
Here is an unsolicited testimonial from your faithful reader and long-time admirer:

I start each morning, every day,
With breakfast -- and the Post,
I read what pundits have to say,
Both here -- and coast to coast.

But first, a habit that is mine,
I carefully unfold
The paper, to The District Line,
And read each word by Gold!

Your column sets the tone each day,
And cheers me up no end,
It matters not what others say,
At least you've got one friend!

By the way, Bill, thanks for including my name in your birthday greetings (June 16). It's an honor to be in such distinguished company.

P.S. The contribution is for your favorite charity.

In January 1966, Harry submitted this poem to Poet Lore, still in publication.

The Brink of Space

Harry sent this Letter to the Editor to New York Daily News on September 20, 1968, the day they published an article titled "Wall Street Tickers Flip Over Sweater Girl Figure." Did you know -- "sweater girl" was a term made popular in 1940s and '50s Hollywood for shapely women wearing tight sweaters; it became synonymous with "pin-up girl" during WWII.

The attached story published in your newspaper has excited my imagination to the point where the only appropriate response could be the following poem:

Now this has been the subject of
Much idle conversation,
And it could fill a lot of books,
That's no exaggeration.

So if what I'm about to say
Sounds somewhat idiotic,
It's because those lovely sweaters
Make me mentally neurotic!

For everywhere I look, it seems,
I see a lovely vision,
No wonder all the scientists
Invent atomic fission!

I sign in every morning,
All prepared to do my share,
Then for eight exciting hours
All I do is sit and stare!

Though I make an honest effort
To perform a job that's right,
I can't do any work at all
As long as I have sight.

I spend a whole day scheming,
Ah, fantastic plots and schemes,
Then at night I wake up screaming, 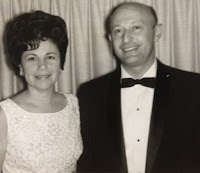 For I see them in my dreams!

Once I thought I was impartial,
I could look but never touch!
But really, now, I must admit
That this is much too much.

I used to be quite sane, you see,
But now I'm on the brink,
Indeed I'll go quite mad if
I allow myself to think.

I used to be quite virtuous,
But now I'm on the verge;
These things arouse in me a
Certain predatory urge!

Every time I see them,
they contribute to my rage,
They're so easily encountered,
But not easy to engage!

After reading through this poem,
I am sure you will agree,
There is nothing worse than sweaters,
For creating misery!


I didn't find the original NY Daily News article online, but this article gives a brief explanation of the young woman's short-lived fame: The Bizarre Story of the Wall Street Sweater Girl. And here's the complete story of Francine Gottfried on Wikipedia.