Israeli settlements are not an obstacle to peace

My dad would have turned 95 today. To commemorate his birthday, he surely would have chosen to post an article he wrote about Israel – so strong in his heart. Harry’s Israel-themed newsletter articles from years past are absolutely still relevant. He wrote this one in 2009. Feel free to share and discuss it with your family and friends.


Are the Israeli settlements an obstacle to peace? Are they illegal, that is, in the sense that they violate international law as stated in the Geneva Convention? You don’t have to be an expert in international law or a “Philadelphia” lawyer to know that the answer is no. It is only in a world in which the United Nations contains a majority of nations with majority Muslim populations who, together with the 22 Arab countries of the Middle East and Africa, are virulently anti-Semitic, that they are considered illegal. But this is a question that lawyers and judges can argue over ad infinitum. The world consensus will always come out against Israel and it is futile to counter with logic and precedent against hatred and bigotry. 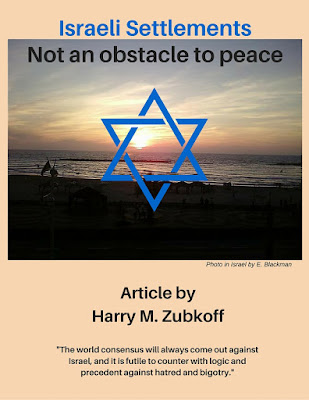 The provisions of the Geneva Convention adopted after WWII prohibit the forcible transfer of any part of the population of one state to the territory of another state which has been occupied as a result of war. This is the principle on which the critics of Israel denounce the settlements as illegal. But this principle was intended to protect local populations from displacement, as the Soviets and Germans had done with forced transfers of Poles, Czechs and Hungarians during the war. The Geneva Convention does not prohibit individuals and groups from moving to land which is not and was not part of a “state” and is not privately owned by any individual. In that sense, Israelis moving to and establishing settlements is voluntary, not forced, and those settlements are not meant to displace anyone living there – and they don’t.

The charge that the settlements are illegal cannot be justified legally and can only be regarded as political, but, as with any lie, it has been repeated so often and so widely that it has come to be accepted as truth. What is true is that the so-called occupied territories, which is the West Bank, is not part of any other state but is simply land over which there are competing claims. Jordan occupied it for a while but never claimed it or annexed it, and it came under Israeli control as a result of a war of self-defense. Israel has a valid claim to this land and, if the Arabs of that area feel they have a valid claim, too, these claims can be resolved by negotiation. Throughout the world, competing territorial claims have been resolved by war, with the victor making the final decision. Israel is the only country in history which, having won the war, must negotiate with the defeated enemy to resolve a land dispute. The problem is that there is no international court of law and justice that can be described as fair and impartial to hear the legal arguments.

The question remains: Are the settlements an obstacle to peace between the Israelis and the Arabs? There is no evidence to support the claim that they are. In fact, all the evidence refutes it. Before the settlements existed, the Arabs were unwilling to make peace with Israel. It is the very existence of the state of Israel that is the obstacle to peace. Even before the state of Israel existed, the Arabs were unwilling to live in peace with the Jewish residents of the British Mandate in Palestine. We can go into that history in another article, but for now, let’s stick to the present.

The President of the Palestinian National Authority, Mahmoud Abbas, has stated that any new peace negotiations can only be conducted if the Israelis stop building settlements in the Palestinian territories. But what exactly are the Palestinian territories? They claim all the land, every inch of what the Unite Nations set aside for them when it partitioned one quarter of the Palestine Mandate into two parts, the smaller part for the Jews and the larger part for the Arabs. (Three quarters of the Mandate area had already been given to the Arabs for their own state, now known as Jordan.) The Arabs immediately went to war to eliminate the Jewish state, and lost part of their original parcel in their defeat. Now they want it back, despite their defeat in the war they started, and they still refuse to recognize the state of Israel. Can anyone seriously believe that the settlements have anything to do with it? In any case, in various agreements between Arabs and Jews, the question of the settlements was to be left for discussion in the final status negotiations. It was also agreed that the Arabs would have no jurisdiction regarding the settlements until the conclusion of a permanent Status agreement. It is important to note that all the settlements in the Sinai were uprooted and their residents relocated when Egypt signed a peace treaty with Israel.

Even if the Israelis were to stop building or even adding on to settlements, what do the Arabs offer in return? Would they recognize Israel’s right to exist? Sign a peace treaty? They have offered nothing. Meanwhile, Arab building continues and accelerates. For example, a new housing project is proceeding in Ramallah, which is planned to house some 10,000 people. And thousands of Arabs are moving into Jewish sections of Jerusalem, though the Arabs object strenuously when the Jews move into the Arab sections. There are more than a million Arabs living in Israel, some 20 percent of the population, enjoying all the rights and benefits of citizenship. It is a cliche, but it is also true, that the Israeli Arabs enjoy greater freedom and opportunity than they have in any of the Arab countries of the Middle East. The Arabs of Palestine, on the other hand, want no Jews in their territories and condemn the settlements as intruding on their land.

In Gaza, for example, the Israelis decided not only to stop building new settlements but to remove their existing settlements entirely, forcibly removing all the settlers and relocating them in other parts of the country. Did peace ensue? Hardly. Instead, an unceasing rain of rocket and mortar fire followed from Gaza into the cities and towns of southern Israel – more than 12,000 over an eight-year period, before Israel finally decided to retaliate. Did the UN condemn the ceaseless rocket fire from Gaza into civilian communities in Israel? No. But it condemned Israel for finally fighting back in an effort to stop the bombardment. In the face of this evidence, how can anyone seriously claim that the settlements are an obstacle to peace?

Also on the topic of Israeli settlement and building is his article “The Jerusalem Affair”, posted here in April 2016.