The military and the media – good news or bad?

Those of us lucky enough to have had our parents around in their old age may think we knew everything they were up to. I knew my dad was a prolific writer, but I read little of what he wrote. Thankfully he saved some of his essays, because now I’m getting an education. I hope you are, too. Harry wrote this piece in 1991, probably for Defense Media Review, the newsletter he began after he retired from government. 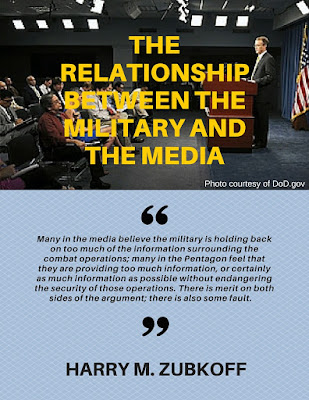 The relationship between the military and the media has never been entirely amicable, and rightly so, but it has seldom been as tense as it seems to be now, when we are engaged in a shooting war. Each side of this relationship seems suspicious of the other. Many in the media believe the military is holding back on too much of the information surrounding the combat operations; many in the Pentagon feel that they are providing too much information, or certainly as much information as possible without endangering the security of those operations. There is merit on both sides of the argument; there is also some fault.

Between early August last year and mid-January this year, a period of six short months, Americans followed the rapid sequence of events unfolding in the Middle East step by step. First, of course, there was Iraq’s unexpected invasion and takeover of Kuwait, preceded, we learned subsequently, by the most inept diplomacy since Chamberlain’s visit to Munich in 1938. Then came the dispatch of American troops to defend Saudi Arabia and the brilliant diplomatic efforts to mobilize the United Nations and to assemble a coalition to eject Saddam Hussein from Kuwait. These developments were covered admirably in the news media, both print and electronic, and all of us had ample opportunity to keep abreast of the news and to understand the direction in which American policy was inexorably heading.

Since the combat started in mid-January, most Americans have remained glued to their television sets, fascinated by the pictures and trying to gain an understanding of the war through the words spoken by all the talking heads. And there’s the rub! It is a paradox of the times that despite almost saturation coverage, totaling hundreds of hours of broadcasts on all the networks, with dozens of experts and specialists paraded before the viewing audience to explain every aspect of the continuing operations, the complaint that we are not getting enough hard news or information is growing. What’s going on here? Is it a legitimate complaint on the part of the public, or is it a complaint that arises out of the frustrations of journalists who are not as free to pursue their stories in the Saudi Arabian desert as they are at home? Are there really limitations on them that affect the public understanding of events?

Complaints about the lack of hard information had been simmering beneath the surface before the shooting started, even though the public had been inundated with stories that included detailed rundowns on the Pentagon’s war plans. They came to a head when the Defense Department issued some ground rules early in January governing the reporting of combat operations when and if the war started. These rules generated such heated controversy that they were promptly withdrawn, to be replaced by a modified set of rules that included advance security review of all stories coming out of the Gulf. To the media, this amounted to censorship. Since the rules also required reporters to be accompanied by military escorts at all times, they were effectively prevented from collecting information on their own.

Since the end of the Vietnam War, reporters charge, the military has carried a bitter resentment against the press in the mistaken belief that the critical reports reaching the American people undermined public support for the war effort and ultimately led to our defeat and withdrawal. Thus, when the military declares that Iraq will not be another Vietnam, what they really mean is that the press will be severely restricted from the freedom to criticize that they enjoyed at that time. Evidently, according to some journalists, the military public affairs people believe that they can assure continued public support for the war effort by seeing to it that the press only transmits good news to the American people.

The military is making a bad mistake, say the reporters. This sort of attitude is rapidly poisoning the relationship between the reporters covering the war and the public affairs officers who are trying to control their access to the news and monitor the stories they publish. The problem is compounded by the unique situation in Saudi Arabia, where reporters must also be concerned with the particular sensitivities of the host nation, whose societal values and practices are so different from our own.

Criticism of the pool system is especially bitter on the grounds that reporters assigned to pools have to go where they are taken, rather than where they would prefer to go or where the action is taking place. Pool coverage failed miserably in Panama, mainly, they claim, because they arrived too late to record the action or because they were held on a short leash by their military escorts. By the same token, pool reports in the Gulf result in great public relations stories for the military, but that is not journalism and it is not the role reporters want to play.

There is a popular cliche to the effect that Generals are always preparing to fight the last war. Obviously that is not true in the Gulf, where a host of remarkable new high-tech weapons has made possible the employment of new tactics and techniques. What is true, however, in the view of many military public affairs officials, is that the media seem to be preparing to cover the last war; they seem not to have grasped the fact that the Gulf presents a totally different situation.

To begin with, when American troops were first dispatched to Saudi Arabia, there was no way for reporters to accompany them. Reporters had to obtain Saudi visas in order to enter the country, and such visas were not available to them. The organization of press pools enabled them to accompany the military initially, and still enables them to perform their jobs today. Moreover, once they are in the country, it is simply not possible to jump into a jeep and drive to where the troops are, often hundreds of miles away across a vast and very hostile desert. The only alternative, if they want to see anything beyond their hotels, is to be assigned to a pool and taken to various military sites.

There is also another aspect to the problem, that of numbers. As we go to press, there are somewhere between 700 and 800 reporters in Saudi Arabia (the visa problem has been relaxed somewhat). There is simply no way for the military to accommodate the wishes of so many reporters clamoring to go off on their own to cover stories of choice. The only way to give them access to anything at all is through the use of pools.

There may be a few exceptions, but almost no public affairs officers today have any lingering residual prejudices against the media because of the Vietnam experience. On the contrary, they welcome the press and want the coverage of this war to be as full and as accurate as possible. Everyone from the top down, both in the Pentagon and in the theater, takes great pains to make the daily press briefings as informative as they can be within the bounds of operational security. And there’s the dilemma, in the military view, which the reporters fail to see.

In this age of instantaneous transmission by satellite, it is entirely possible to disclose helpful intelligence to the enemy unwittingly or inadvertently, according to military officials, either in words or in pictures. This is why advance security review of transmissions is necessary, not to preclude the publication of embarrassing or critical material, as some reporters claim, but rather to screen out information that might jeopardize the security of our forces or of specific military operations.

In the end, the public will decide how adequate the press coverage has been. The pool system is not cast in concrete; it may be abolished someday. Advance security review may be replaced someday, too, by a system of voluntary restraints similar to those that governed the press in Vietnam. One thing, however, is certain. As long as the war goes well, the present system of briefings and pools may serve the purpose of keeping the public informed. But when things go badly or wrong, as they inevitably will in war, the tensions between the press and the Pentagon will rise. And that is when the public will be better served by free and unbiased reporting, without the favorable spin put on by public affairs officers. In that day, the good news may be that we will have full and free access to the bad news.