'The Surprise' – a story of jealousy

FEB 1, 1958 – The date-stamp in red ink is barely visible on the top corner of the thin, yellowed paper. Could it be the mark of a potential publisher who once received Harry’s short story, only to return it later, unpublished? The typed story, however, still reads clearly. ... Also clear is that Harry's love for reading fiction turned to writing it as well. On this page you'll see one of dozens of short stories no longer buried deep in musty boxes. It's the first one I read, and -- no surprise! -- it made me want to read more. See if you agree. 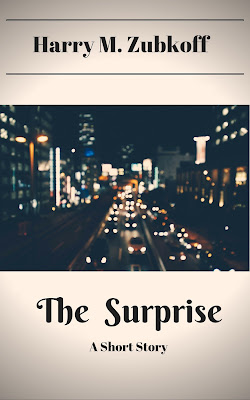 He shook his head violently, as though by doing so he could dismiss the thought of her and Samuel. The phone was ringing.

Sure, he thought bitterly, it’s me. John, the big brother type, always a brother, never a bridegroom.

“John,” she said anxiously, “are you still there, John?”

Oh no, he thought, I’m just going to kill Samuel, that’s all. It won’t take long, and I’ll be free afterward.

“What did you have in mind, Kathryn?” he asked.

“I thought we might have dinner together somewhere,” she said.

“What about Samuel?” he said, and could have bitten his tongue.

“You don’t like him very much, do you, John?” she said gently.

I hate him, he thought. I hate everything about him, everything. But most of all I hate him because he took you away from me.

“You shouldn’t feel that way, John,” she went on when he did not reply. “He’s really very nice, and he speaks well of you. I do so want you to like him. Anyway,” she added brightly, “he’s working on some papers tonight, and nobody sees him when he’s working, but nobody.”

Unless he knows you’re coming, he thought. Unless you’ve made an appointment with him. So you could kill him.

“I’m sorry, Kathryn,” he said, “I can’t possibly make it tonight. So many things to do,” he added vaguely.

“Oh,” she was disappointed. “I so wanted to see you alone before …”

“Before what, Kathryn?” he prompted.

“I’m sorry, Kathryn,” he repeated. “Some other time, perhaps.”

“Well, anyway, John,” she laughed lightly, “I can wish you a happy birthday. Happy birthday, darling.”

Oh, Katie, he thought, Katie. If only there was no Samuel. If only it were the two of us again. But it will be, it will be that way again. You’ll see, he thought fiercely, you’ll see. After tonight, no more Samuel. He’ll be dead. I’m going to kill him. It’s all arranged. I ring the doorbell. He opens the door. He’s alone. I go in, close the door, follow him to the library, never the study, never takes anyone into the study when he’s working, he opens that big double door, it’s dark in there, he crosses over to the lamp, reaches for the switch, I shoot, once, twice, maybe three times, it’s dark and I must be sure he’s dead.

He was sweating, his shirt sticking to his back. I must stop thinking, he thought desperately, stop it.

He had considered and discarded a dozen plans before finally settling on an alibi. It was the simplest, the easiest to execute, the most foolproof, and probably the oldest alibi in the business. I’m beginning to think like a professional killer, he thought, and shuddered. Watch the time now, he told himself, from now on you’re on a timetable.

At five minutes to six he arrived at the theater. The girl in the box office smiled in recognition as he paid for his ticket and he checked his watch with her. She’ll remember me, he thought. As usual he handed the doorman a cigar when he entered and deposited his ticket stub carefully in his watch pocket. The serial number on the ticket would prove he had entered before 6:00, and the doorman would corroborate it. Not that he’d need any proof, but just in case. He had even seen the picture before, only two nights ago, at a different theater. Again, just in case.

He sat quietly, looking at the screen with blank eyes till 6:30. Out front, he knew, the doorman and the girl in the box office would be relieved then, for a one-hour dinner period. He had one hour in which to kill Samuel. It would take twenty minutes to walk to Samuel’s home, five more to get in and kill him, twenty minutes back to the theater. He should be back at 7:15, well within the hour, with fifteen minutes to spare in case there was any delay. The relief box-office girl and doorman would not know him, the second ticket stub he would dispose of, and when he finally emerged from the theater at 8:40, he would make a point of saying goodbye to the regular doorman.

It was as simple as that. He had turned it over in his mind again and again. He could see no flaw.

At 6:30 he left the theater. It took exactly twenty minutes to reach Samuel’s. No one saw him. No one would remember him. At exactly 6:50 his gloved hand rang Samuel’s bell.

Samuel opened the door, the hateful smile on his face.

He took off his hat, hesitated, then removed his gloves. Looks more natural, he thought, mustn’t make him suspicious. Have to be careful not to leave any fingerprints around, though.

He was wet. His legs felt shaky.

“You know, John,” said Samuel, “I’m glad you came tonight.” He seemed strangely nervous, as though he had a premonition. “I sort of had an idea that you didn’t like me. Because of Kathryn. I hope we can be friends,” he went on. “She’s very fond of you, you know.”

The final insult, he thought, the final humiliating insult. As Samuel opened the double doors to the library he took the gun out of his pocket. He stood just inside the doors as Samuel crossed the dark room to the lamp, barely visible from the reflected hall light.

“Stand where you are,” he said. His voice frightened him. It sounded strange, harsh. He forced himself to speak again.

Samuel stood still, his face a white blur in the darkness. His mouth was open, his teeth showing, but he was not smiling.

“I’m sorry you feel that way, John,” he said finally. “What are you going to do?”

He had not seen the gun.

“I’m going to kill you,” said John, and shot, once, twice, and, as Samuel crumpled, a third time. Back to the theater -- his mind was going through the catechism unbidden -- buy my ticket, destroy the stub, take a seat, watch the picture, out at 8:40, home to bed, no one will find him at least till tomorrow.

He was suddenly aware that the light was on, several people standing in its harsh glare. He stood frozen, gun forgotten in his hand, hearing the murmur of voices but unable to comprehend the words. Then he saw Kathryn on the floor crying, Samuel’s head cradled in her lap. He looked at Samuel, at the face that would smile no more.