'It Will Never Was' – a story of time travel

I'd been avoiding many of the old boxes in my basement, overwhelmed with the thought of reading piles of my dad's unpublished novels and stories. They vary in length -- and age, ranging from 30 to 70 years old. Well, I finally started with the short stories. I posted the first ("The Surprise") on this blog last week. Although some may appear long, they read quickly, even for a non-speed reader like me. This one has traveled safely through time, I'm guessing from the 1950s or '60s. 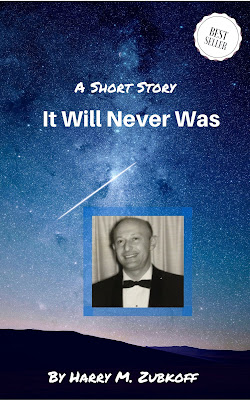 “How do you know that?” asked O’Neil.

“Because,” said the Professor, “we have never been visited by travelers in time – neither from the past nor from the future.”

“I repeat,” said O’Neil, “how do you know that?” He looked around the classroom, seeking assurance in the blank gazes of his fellow students. Finding none, he shrugged and continued. “After all, Professor,” he said, “how do we know? Any number of time travelers may have visited us. Besides, the fact that we haven’t been visited, if we haven’t, isn’t conclusive proof that they don’t exist. Maybe they just haven’t gotten around to visiting this age yet.”

The professor smiled. “On the surface,” he said, “you make a good point. But consider, a moment. It is only in the very recent past that men have achieved the technological ability to make a time machine, even assuming that we had the basis in scientific knowledge. And it would seem incredible that such a device could be made and put into use, say within the last hundred years, without some information about it becoming public. Why, a project big enough to make a time machine, with the associated research and development aspects, would compare in size with the Manhattan Project. Impossible to keep it secret. This leaves us, then, with the future. If you assume, for the sake of argument, that a time machine was invented in the future, what would be the most logical age for them to visit? Why, the period in which the greatest scientific discovery in history was made, of course, the 20th century, when the energy of the atom was harnessed by man. Inevitably, Mr. O’Neil, an explorer from the near or the distant future would be irresistibly drawn to witness the first explosion of a nuclear weapon, the first atomic bomb to be dropped in war, the first H bomb, the first peaceful uses of atomic energy, and so on.”

The smile on the professor’s face broadened. “As I have heard you observe on several occasions, Mr. O’Neil,” he said, “it’s a natural. And the mere fact that absolutely no evidence exists that this period of time was ever visited, indicates conclusively to me that time machines have never been invented.”

“Well,” said O’Neil slowly, “that’s pretty involved reasoning, Professor, but I’m not sure I go along with it all the way. For example, what if time travel involved a dematerialization so that the traveler was invisible to …”

Professor Angel walked slowly down the leaf-strewn sidewalk cutting across the northeast corner of the campus. A flaw, he thought, a flaw somewhere. I’ve been thinking about time travel half my life, and a 20-year-old boy says I’ve got a flaw. A flaw indeed. He sighed heavily. But where? His reasoning, he knew, was sound, his presentation, effective. The class, he was sure, accepted his arguments without reservation. Except for O’Neil, of course. That O’Neil, singularly intelligent young man, he thought, but what was there about him?

His wife greeted him at the door of their small, ranch-style house. “Call for you,” she said with that thin, tight-lipped expression that meant only one thing. “You’re to report to Dean Willard at once.”

O’Neil, he thought instantly, it must be him.

“All right,” he said. He patted her shoulder.

First time in three years, he thought, that’s not a bad record. It can’t be serious. He went down to the basement, pressed the button that moved one wall aside, and entered the room with the squat ugly machine. The wall rolled back before he was settled in the seat and as the machine began its powerful humming-throbbing noise and the room disappeared before him. The machine was pre-set; he could do nothing to control it. When it stopped, he emerged into the presence of two men. One was Willard; the other – O’Neil. Good heavens, he thought, the man’s a spy. And even while he thought it, his mind was saying no, not a spy, a security agent, that’s it, a security agent.

He said nothing, watching them silently. Willard spoke first.

The professor inclined his head slightly.

“Isn’t that what I’m doing?” said the professor.

“Of course,” said Willard, “except that you are stationed in the 20th century of the Christian Era, and O’Neil can move about from time to time at will. Also, where you are looking for details, he is looking for broad clues. And he has one.”

They are playing with me, thought the professor, they know. The whole fearful weight of his knowledge pressed upon him. His shoulders drooped as he sighed.

“I think,” said O’Neil, speaking for the first time, “that you have discovered the principle of time travel.”

No, thought the professor, he can’t know. I can’t be that transparent.

“Man,” O’Neil went on suddenly, “it’s a natural. Think of it. We discover two time machines, both obviously built at different times, by different technologies, yet necessarily operating on the same principles. We learn how to make them work, but no matter how we try, we can’t fathom the principles, the secret of making more. So, with two machines, we set out to explore time, to learn the twin secrets, so that we can set a dying world on its feet again.” He paused, breathless, then continued, more slowly. “One of those machines,” he said, “I suspect was built during the Atlantean Age, and we’re checking it. But the other could easily have been built during the 20th century of the Christian Era, and that, Professor, is where you’re stationed.” He pointed an accusing finger. “You’re the only one of us,” he said, “who could have figured it out himself. The rest of us would have had to steal the secret, but you could have learned it. And I think, Professor, that sometime in the last three years you have learned it.”

“If you have time,” said Willard, and his voice was suddenly menacing, “you had better tell us, Roger.”

“No,” said the professor, “I can’t. I’m not sure. Don’t you see? Time. I need time. It takes time. I must have more time.” He watched them closely, noting the swift glance that passed between them.

“How much time?” asked O’Neil.

Again the swift glance, this time with something more than understanding, something infinitely cynical in it.

“Very well, Roger,” said Willard. “We’ll give you this time. Go back to your work. We will be in touch with you.”

When the professor was gone, O’Neil turned to Willard. “Can we trust him?” he asked.

“Tell them you don’t know,” said his wife. “Stop building that – that – thing. Tell them you can’t learn the secret; it’s too much for you.”

“It’s no use,” he said hopelessly, “they’ll only put me under the tele-thought. They’ll use it,” he continued, “to plunder the ages.” He shuddered. “They’ll destroy everything. They respect nothing. They’ll sack the world. The rape of time. They’ll come back to this time in force, robbing, destroying – they’ll …” He stopped. Slowly the frown straightened out, the eyes brightened, the smile broke through. “Of course,” he said softly, “of course.”

Two years later he appeared before Willard and O’Neil, serene and self-confident.

“I’ve done it,” he announced, “I’ve built a nuclear powered time machine. I know the principles.”

“Good, Roger, very good,” he said. “We will set up a factory to produce them in quantity, and you will direct the work.”

“Eh,” Willard scowled, “you know better than that, Roger, we’ll put you under the tele-thought. You can’t resist.”

“No,” said the professor, still calmly, “you can’t make me do anything anymore. You can’t win, gentlemen. You’ll never win, because you haven’t won. Don’t you see?”

“Very well,” said the professor, “I’ll explain. You see, the machine, which I built back in the 20th century of the Christian Era, is the same one we’re using now, the one which you suspected was built during that period. By the way, where is it now?”

“One of my men has it in the Atlantean period,” said O’Neil. “Goddard. Maybe you know him?”

“Ah yes,” said the professor. “A very capable fellow. Perhaps even capable enough to – well, never mind, let’s continue. In any event, I built my machine – and used it to do some exploring. With it I discovered that I remained in the 20th century, Christian Era, and lived out my life there. Subsequently, others used it – then it was lost for some ten thousand years, until you found it again. It conclusively proved, however, that no one else ever built another machine – except for the Atlantean model. So you see, you lose.”

“But, but,” sputtered O’Neil, “how could you and Goddard be using the same machine at the same time?”

“Oh, but it’s not at the same time,” the professor smiled, “it’s at different times.”

“Even so, Roger,” Willard broke in, “what’s to prevent us from putting you under the tele-thought, from learning the secrets, and from building more machines?”

“Just this,” said the professor, slowly walking over to his machine, “If you will notice, I came here in my machine, not yours, which is still in my 20th century basement. When I leave here, you will no longer have a machine at your disposal. I’ll be out of your reach forever. I’m going back now to warn Goddard – or to destroy his machine, which is really my machine, if he won’t listen to reason. But I think he will. When I’m gone,” he added, “ponder this, gentlemen. You cannot change time, you can only witness it.”

The last he saw of them was the stunned expressions on their faces, the dawning realization of defeat.

Professor Angel looked at the blank faces of his students, compressed his lips, then smiled as he concluded his lecture.

“There is only one conclusion,” he said. “Observation bears out the fact that time travel never has and never will achieve widespread use. To coin a phrase,” he added thoughtfully, “it will never was.”