‘A Guide to the Conduct of the War’ -- a short story

War stories aren't my favorite, but after my dad passed away, I read the book "The Brigade." It's a true war story that's similar, I've learned, to his U.S. Army mission. Now I'm sharing a war story Harry wrote, possibly soon after his Army service. Did he base it on personal observation? We'll never know. Unless he shared it with friends or submitted it for publication, the yellowed, typed original has remained sight-unseen in a basement box -- until now. 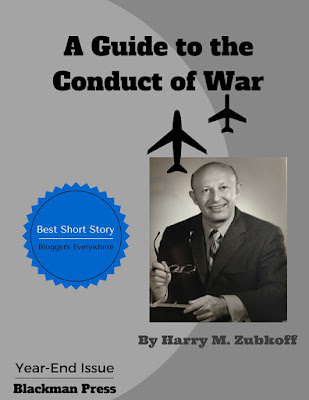 Up – up – up into the wild blue yonder, the trim little fighter ship, its metal skin gleaming in the bright sunlight, rose, seemingly as a feather.

The pilot at the controls felt the same surge of joy, the same vibrant thrill that he invariably felt on his ascents into the skies. For was this not his destiny? Was this not what he had been born for, bred for, trained for? All his life, since he had been a little boy, he had watched these man-made birds winging their way across the heavens, listened to the roar of their powerful motors as they cleaved their way through the air.

And then had come the glorious opportunity to serve his country in the air. He smiled, now, as he recalled those first days of flight training, the gay good-humor of those embryo bird men, the almost unbearable agony of his first bad landing, and through it all, the never swerving conviction of their serious purpose.

And now, as he soared up high above the clouds, he was a full-fledged fighter pilot with hundreds of combat hours to his credit. The realization widened the smile on his face, for now he had proved that the air was his element. He was serving his country as he knew best.

Back home he was a hero, hailed and feted wherever he went. And it pleased him.

Higher his sturdy craft rose, higher and still higher until finally, leveling off, he found himself all alone in the sky with only the blood-red sun above him and the fleece-white clouds below.

Now he settled down lower in his bucket seat and grimly set his course for his objective. At his present speed he should reach it in exactly thirty-three minutes. But twenty of those minutes would be over enemy territory, and he knew he would have to keep his eyes open. Not that he need worry too much about being shot down. A contemptuous sneer curled the corners of his mouth as his mind contemplated this thought a few moments. For was he not a better man than any the enemy could send against him? And was not his a better ship, faster, more maneuverable, better armed? And were not the very gods with him, even providing him with a speed-increasing tail wind?

Nevertheless, he told himself sternly, he must be careful. His commanding officer had firmly impressed this point on him when he had volunteered for this mission. For this was an extremely important mission and, as his commanding officer put it, an all important objective. He must not fail. And his chest swelled with pride as he recalled the envious looks of all his fellow pilots as they watched him take off, into the very teeth of death for the honor of his country and his people.

Now he was over enemy territory and he felt a queer sensation tingling in all his nerves at the thought. Constantly his eyes scanned the skies, ever roving, ever vigilant, pausing only now and then to glance at this instruments, on the lookout for enemy ships. But his hands at the controls never faltered as his ship droned steadily forward on a beeline to its objective.

Ten minutes to go, ten minutes to accomplish what three pilots before him had failed to do. Ten minutes more and his name would go down in history with all the heroes of war. Somewhere below was the target that he must strafe, the target that, once strafed, would hold up the enemy for precious hours. Hours, which would enable his government, anxiously awaiting the report of his success, to assemble the necessary equipment to deliver the knockout blow.

Five minutes to go. This was becoming ridiculously easy. Where was the enemy air opposition? Were they so frightened by the approach of one lone fighter plane as to keep all their ships on the ground? But wait. What was that? Off to his right, those three specks on the horizon, heading on a course that would intercept him a few miles ahead. Now he saw them clearly, but they were at least a thousand feet below him. Had they seen him? They gave no sign. Well, he must chance it. He was too close to the target now to turn back. His right hand clenched the control stick tightly as he continued on his course. They were directly below him now. Still they gave no sign of having seen or heard him. And then, suddenly, almost like one ship, the three turned over and dived down through the clouds below, to disappear from view.

He heaved a prodigious sigh of relief as he loosened his clutch on the control stick. Simultaneously, he realized that he was over the target. This was it! Now!

He breathed a prayer to the god above him as he started his dive toward the ground. Down, down, down through the mist-like clouds, down, down through an eternity of nothingness, past the very eyes of death itself, while the wind whistled and screamed in vain in his wake.

Abruptly, he was in the clear. As he leveled off, he recognized the target below. His objective! And at the same time he saw the single enemy fighter coming straight at him out of the blue ahead.

No time to dive on his target. No time to seek the protection of the clouds above. No time to try any evasive action at all. Time to fight! He must dispatch the enemy with all possible speed and proceed on to the target.

Automatically he switched his guns to “all on” position and as the two ships drew closer together he opened fire. The enemy opened fire at the same instant. Beads of sweat covered his forehead as he held his thumb on the trigger. Suddenly he knew the meaning of fear. This enemy, this boastful, swaggering, stupid enemy, was coming at him head on. He had heard tales at home of this enemy’s penchant for suicides, but he had never before encountered it in this fashion. Yet, here it was. He watched, fascinated, as the ship in his sights grew larger and larger, swelling out of all proportion to its true size as it drew closer and closer. Violently he wrenched the control stick to the upper right corner and clamped his foot down on the right rudder to dive away.

And even as the bullets thudded home into his brain he realized he had made a mistake. In the last, lingering instant of death he realized that he had failed, that he, Son of His most Imperial Majesty, Exalted Ruler of the Universe, Emperor Hiro-Hito, had been blasted from the skies by the thundering guns of an American P-40.

“Mother Hubbard to Peter Rabbit. Come in. Over.”

“I just shot down another Jap Zero. Over.”

“Okay Pete. Come on down and finish this game of poker. We’re holding up your hand.”