Reflections on the military-industrial complex

On June 30, 1994, Harry last edited this document in his computer files. I would think he wrote it for a publication. Similar to other essays on this blog, he talks about lessons from World War II. 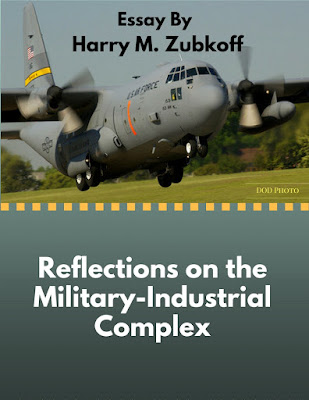 Ever since President Dwight D. Eisenhower left office in January 1961, critics of military spending have cited his comments about the “military-industrial complex” to challenge the cost of national security. By quoting him they lend a measure of dignity and authenticity to their critical comments, even though they distort his intent by quoting him out of context. It is important to understand the context.

From the time the United States entered World War II in December 1941, it took more than two years of all-out effort to gear up our ill-prepared military and industrial resources. The whole country became what President Roosevelt called the “arsenal of democracy”. The production record achieved by industry in providing the weapons for the armed forces enabled the United States and Allies to forge a winning team.

There was an important lesson in that experience, one that George Washington had enunciated so clearly in the dawn of our nationhood. If we would prevent war, he said in effect, we must be prepared for war. We forgot this lesson after the war. Demobilization became the name of the game and the great arsenal of democracy not only fell into disrepair, it was substantially dismantled. When the Korean war started in June 1950, we found ourselves largely unprepared to conduct extended combat operations until our industrial resources could once again be geared up to produce the needed weapons. We must never be caught unprepared again.

A vital element in keeping the peace is our military establishment. Our arms must be mighty, ready for instant action, so that no potential aggressor may be tempted to risk his own destruction.

Until the latest of our world conflicts, the United States had no armaments industry. American makers of ploughshares could, with time and as required, make swords as well. But now we can no longer risk emergency improvisation of national defense; we have been compelled to create a permanent armaments industry of vast proportions. Added to this, three and a half million men and women are directly engaged in the defense establishment. …

This conjunction of an immense military establishment and a large arms industry is new in the American experience. The total influence – economic, political, and even spiritual – is felt in every city, every state house, every office of the federal government. We recognize the imperative need for this development. Yet we must not fail to comprehend its grave implications. Our toil, resources, and livelihood are all involved; so is the very structure of our society.

In the councils of government, we must guard against the acquisition of unwarranted influence, whether sought or unsought, by the military-industrial complex. The potential for the disastrous rise of misplaced power exists and will persist. We must never let the weight of this combination endanger our liberties or democratic processes. Only an alert and knowledgeable citizenry can compel the proper meshing of the huge industrial and military machinery of defense with our peaceful methods and goals, so that security and liberty may prosper together. ...


There is, indeed, a warning in these words, but it does not constitute a condemnation of the military-industrial complex, as the critics charge. On the contrary, it constitutes recognition of the essential nature of this new phenomenon in the American experience. President Eisenhower understood, better than most, the absolute necessity for military preparedness in today’s world and for the industrial base upon which preparedness rests. Implicit in his warning is the acknowledgment that the military-industrial complex is a necessary element of American life in our times, brought about by the nature of the world we live in.

So, to the men and women who inhabit that military-industrial complex, whose daily efforts insure that the United States will always be ready to defend its interests, this country owes a profound debt of gratitude.