The address at the top of the stale, typewritten story in Harry's files reads: H.M. Zubkoff, 192 Crestwood Ave., Buffalo 16, New York. It means he wrote it before he moved to Maryland in 1949, and before he turned 29. We can assume he was back from his post-war stint with the U.S. Army Counter Intelligence Corps. He served in France and Germany on a mission to hunt down Nazi war criminals and gather evidence for the Nuremberg Trials. Harry spoke little about those years, vowing silence because, he would say, "If I tell you, they'll kill me." He stated for the WWII Veteran's History Project, however, that he had spoken extensively with Holocaust survivors in internment camps. Writing fictional stories may have given him an outlet to “reveal” his observations and experience. The top photo in the graphic below is Harry in Germany, 1946. We can only guess about the other two -- one looks like a mass gravesite; the other a soldier with a whip. Did he confiscate these during his mission? 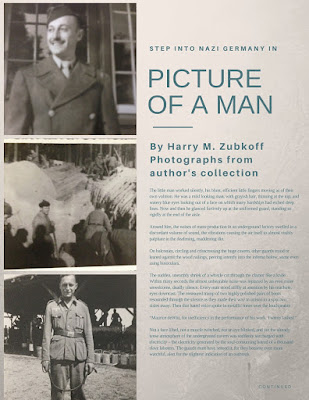 The little man worked silently, his blunt, efficient little fingers moving as of their own volition. He was a mild looking man, with greyish hair, thinning at the top, and watery blue eyes looking out of a face on which many hardships had etched deep lines. Now and then he glanced furtively up at the uniformed guard, standing so rigidly at the end of the aisle.

Around him, the noises of mass-production in an underground factory swelled in a discordant volume of sound, the vibrations causing the air itself to almost visibly palpitate in the deafening, maddening din.

On balconies, circling and crisscrossing the huge cavern, other guards stood or leaned against the wood railings, peering intently into the inferno below, some even using binoculars.

The sudden, unearthly shriek of a whistle cut through the clamor like a knife. Within thirty seconds the almost unbearable noise was replaced by an even more unwelcome, deadly silence. Every man stood stiffly at attention by his machine, eyes downcast. The measured tramp of two highly polished pairs of boots resounded through the silence as they made their way in unison to a spot two aisles away. Then that hated voice spoke in metallic tones over the loudspeaker.

“Maurice deWitt, for inefficiency in the performance of his work. Twenty lashes!”

Not a face lifted, not a muscle twitched, not an eye blinked, and yet the already tense atmosphere of the underground cavern was suddenly surcharged with electricity – the electricity generated by the soul-consuming hatred of a thousand slave laborers. The guards must have sensed it, for they became even more watchful, alert for the slightest indication of an outbreak.

The little man had not moved a muscle. Like the rest, he had given no sign that he had heard. But behind the impassive mask of his face he knew, from bitter experience, only too well what those words meant. His body still bore the scars from the twenty lashes he had received months before. And beneath his thinning patch of greyish hair, his thoughts boiled and seethed with all the concentrated fury of his terrible hatred.

Outwardly, he gave no sign of the turmoil within. For he must not give his thoughts away. He must wait and bide his time. His day would come. And when it did, let those Nazi pigs beware.

They had led the offender away to the “Area of Punishment” and now, as he stood motionless at his bench, he could hear the whip whistling as it slashed its way through the air to cut its victim’s back into ribbons. But no shrieks of agony. No, these poor, tired, broken slaves no longer cried out with pain. They knew how the Nazi beasts loved the sight of their suffering, how they licked their chops like hungry dogs at the prospect of inflicting pain and torture on these defenseless slaves. And they had long since ceased crying out at their beatings. Not out of bravery, but rather out of spite. Now their silence in their torment was even more terrible than their screams.

The Nazis were baffled by this awful silence in the face of their brutality. Bewildered and angry, they continued to heap more and more abuse on these “stupid slaves”.

The sudden unearthly shriek of a whistle cut through the silence like a knife. Within thirty seconds, the deadly silence was replaced by the almost unbearable noises of mass production in an underground factory. Life resumed its maddening monotony to a thousand slave laborers as they again took up the routine of production.

The little man worked silently, his blunt, efficient little fingers moving as of their own volition. But they turned out less than half the amount of work of which they were capable. His heart was heavy as he performed the mechanical motions of his job. How could he, how could they ever throw off the yoke of this tyrannical oppressor? How could they ever again attain their freedom, their hopes, their happiness? Their only possible hope lay with the American Armies advancing from the West. God grant that they would arrive soon. Neither he nor his people could last much longer under these conditions. And the Nazis had a way of dealing with men who have outlived their usefulness.

That night, as he rested fitfully on a filthy straw mat, he could hear the intermittent rumbling of the big guns to the West. They kept time with the tom-tom beating of his heart and he almost slept well.

In the morning the guns sounded considerably closer and the Nazi guards were visibly nervous as they herded their captives toward the yawning hole in the ground that was the entrance to the hated factory.

Once again the utterly meaningless routine of production absorbed his attention, while the air resounded to the vibrations of the infernal machines.

But as he glanced surreptitiously around the huge hall, he noted that there seemed to be many guards missing from their posts. So, they were worried! And they had good cause to be, too.

It was late in the afternoon when he discovered that the guards had all disappeared. The corners of the aisles, the balconies circling and crisscrossing above, all were deserted. Fearful lest it be another of their fiendish tricks, he continued his methodical output of work.

Gradually others became aware of this curious phenomenon of the missing guards. But it was not until after dark, not until the first American patrol cautiously advanced into the tunnels with leveled guns, that they realized that their days of slavery were over, that their dim, half-forgotten hopes of freedom were at last being realized.

Two days had passed, two eventful days in which the Americans had consolidated their position and in which the slaves, once more restored to the rightful state of free humanity, had celebrated. Many were on their way home, if their homes were still standing. Many had elected to stay and work their machines voluntarily to produce for their newfound allies. And so, the third day found the underground factory once more in the full swing of production.

The little man worked silently, his blunt efficient little fingers moving as of their own volition. He was a mild looking man, with greyish hair, thinning at the top, but his bright blue eyes looked out of a face on which many hardships had etched deep lines. Now and then, he glanced absently up at the uniformed guard, lounging at the end of the aisle. Occasionally, the guard winked at him, a simple act which caused his heart to beat warmly in him.

Around him the noises of mass production in an underground factory swelled in an harmonious volume of sound, a huge symphonic arrangement as the machines beat out their pattern of music, producing weapons for victory.

He would stay here and work till his job was finished, till the beasts of nazidom were wiped from the face of the earth. Then, and only then, would he feel free to go home, to take up the threads of his shattered life and rebuild all that had been destroyed in the brief days of the tyrant.

The little man worked silently, his blunt efficient little fingers moving as of their own volition.