‘Candle’s Flame’ – a story of desire and deceit


Mystery, romance, science fiction -- we've seen them all in Harry's stories so far. If you liked those, you'll want to read this one, too. He wrote it while living on Ridge Road in Greenbelt, MD, between 1953 and 1963. I don’t know why he typed his address on some stories and not others; he dated only some as well. I do know that I’d never seen any of them. And, I’m sticking to my theory that he based many on his experience or observation. 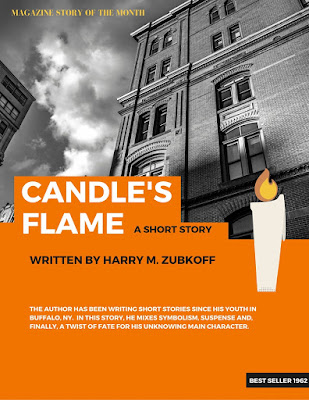 Once there was a man named Candle, Abner Candle, and in Candle, as his name would seem to imply, there burned a flame. It was the flame of passion, for Candle was a sensitive man who quietly but intensely appreciated the beauties of nature.

All his life Abner Candle had been extremely shy, with the shyness of true modesty rather than that born of inferiority. It was not surprising, therefore, when he formed a partnership in his small publishing business with a vigorous and aggressive young man named Mark Walker. Opposites do attract. What was surprising, particularly to their closer friends, was the remarkable prosperity with which their business efforts were blessed. Neither of them had any special ability in the publishing field. Yet, their books became best sellers and were sold for fabulous sums to Hollywood. Before long, they became known as the “good-luck” boys. They were inseparable, and even after their offices were expanded to cover the whole top floor of an impressive office building, they continued to share the same room, crowded as it was with only two desks and a wall calendar.

For twenty years Candle and Walker devoted all their energies to the accumulation of money. Abner was a manuscript reader, the one who decided what books to publish. Mark was a negotiator, the one who attracted the writers and signed the contracts. Together they made a team over which other publishers shook their heads and muttered to themselves about. Their success was uncanny, unprecedented in publishing circles. Some said it was because of their complete lack of sophistication. Others said it was in spite of their unbelievable naiveté. But whatever the reason, the Abnark Publishing Company (so named for obvious reasons) continued to publish best sellers, and Candle and Walker became exceedingly wealthy.

Throughout the years, however, one vital element had been missing from their lives. It was only after Abner interested himself in the other details of the business and Mark suddenly became absorbed in the world of books that they simultaneously discovered the existence of women. This was a most disconcerting revelation since, unaware of their lack of sophistication, they had automatically assumed that their worldly wealth implied that they were men of the world.

“After all,” said Abner doubtfully one day, “what good is our wealth if we have no one with whom to share it?”

“Of course,” said Mark, “everybody knows you can’t take it with you.” And with these words of wisdom they set about remedying this absurd deficiency in their otherwise complete lives.

Candle fell in love with the fourth girl from the left, and Walker with the third, in the chorus line at the local burlesque. They started their courtships with candy and flowers but the reception accorded these gifts was somewhat less than enthusiastic. So they graduated to bracelets and necklaces and were agreeably surprised to find their affections warmly reciprocated. For a time they vied with each other to see who could outdo the other in the originality and lavishness of the gifts they bestowed on their dazzled chorus queens. This procedure inevitably culminated in the traditional “coup de grace” in affairs of this kind. Each of them bought an expensive mink coat (at a discount, of course), and the ceremony of wrapping them around the two lovely bodies was rapidly followed by a double wedding ceremony.

Now the two men had finally come of age, so to speak. Not only was their amazing business success the envy and wonder of all their associates, but their marital triumphs were also greeted with awe and astonishment. Each of them bought a palatial residence in which his wife entertained lavishly, and their friends and associates patronized these affairs avidly. There was, of course, always a liberal sprinkling of chorus girls at these parties, pretty young things who went about fingering the drapes and the silverware reverently, and casting wistful eyes at the bachelor-publishers, or the married ones whose wives were absent. Candle and Walker reveled in their newfound popularity, telling each other that now, indeed, they were truly men of the world.

But the two men began to see less and less of each other. At first they were not aware of this fact, but fewer and fewer evenings were spent working together, fewer and fewer early morning conferences were scheduled, and even their cubbyhole office was discarded for two separate rooms, luxuriously furnished (by their wives) in the Hollywood tradition. Their associates noted with uneasiness this rift that was growing between them. It was brought to their attention, diplomatically, by one of the elder statesmen of the publishing business who took them to lunch one day.

“My friends,” he said tactfully, “what is it between you two? Don’t you like each other anymore? In the old days you were never seen apart. Now you’re never seen together. What’s wrong, boys?”

Both men smiled uncertainly and protested that they now had their own homes, their own wives, and their own lives to lead. But inside, each of them knew that he had lost something which he could never recover. They had lost each other.

As the rift between them grew wider, it became obvious to their friends and associates that their business would suffer accordingly. Together, their judgment and business perspective had somehow coalesced and blossomed, a fact that was borne out by the regularity with which best sellers appeared on their lists. Now individually, they seemed incapable of making decisions. For the first time in twenty years their spring list did not contain at least one book club choice.

Their natural reaction was to blame each other, and this inevitably led to resentment. When their fall list likewise failed to include one best seller, the resentment turned to anger and fury. Then another factor was introduced.

“Maggie,” said Yvonne one day, “if we don’t hurry up and get out of this, our boys are gonna lose all their dough in this racket.”

“You’re right, Sally,” said Lulu, “I think we better go into our act.”

“Abner, dear,” said Yvonne, “isn’t Mark just a doll? I’m crazy about him. And such a wonderful dancer, too.”

“And such thick, black, curly hair,” said Yvonne. “You know, yours is getting awful thin on top.”

During the next few weeks Candle noted with increasing alarm the frequency of his wife’s visits to the Walkers – and the light which glowed in her eyes whenever they rested on Mark. At first he was amused, then vaguely alarmed, and finally, wildly jealous. His appetite waned, he found himself unable to sleep at night, his complexion took on an unhealthy pallor, and his body and soul were consumed by a passionate hatred for his one-time best friend.

Exactly when he decided to kill Mark was not clear, but it was the logical next step in his distorted thinking. Perhaps it came as a result of his newfound sophistication, or perhaps, after all, it was because of his incredible naivete. On the other hand, it may simply have been due to his nervous stomach. But whatever the reason, the decision was made, and with characteristic abruptness he laid his plans.

“I should like to buy a-er-ah – pistol,” he said calmly to the pawnbroker.

“Of course,” said the imperturbable pawnbroker, “what size?”

“Of course,” said the pawnbroker, “just sign here and step around the corner to the police station for your permit. That will be forty dollars.”

“It is not us,” said the pawnbroker, “it is the police. They insist upon it.”

“Well, as a matter of fact,” said Candle thinking fast, “I really wanted a dagger.”

“Naturally,” said the pawnbroker. “We have many beautiful models ranging from ten to a hundred dollars. Just sign this form so that I may register the sale with the police. It is not us,” he added thoughtfully, “it is the police, you understand. They insist upon it. It seems there is some ridiculous law regarding weapons …”

“I was only fooling,” said Candle, “I really came in to buy a-uh-saxophone – yes, that’s it, a saxophone.”

“Of course,” said the pawnbroker smoothly, “we have several fine saxophones – a tenor, alto and bass. You have your union card?”

“It is not us, you understand,” said the pawnbroker regretfully, “it is the union, the musicians’ union. They insist that we keep a record of these transactions, and since we do such a large part of our business with members of their – ahem – profession, we think it only wise to cooperate.”

“I just remembered,” said Candle, “I have an appointment.” He backed out of the store, knees shaking. The pawnbroker looked after him sadly, then sighing made some notations in a big, black ledger – in his pawnbroker’s code, of course.

“I should like to buy some poison,” said Candle.

“Well-ah-perhaps something a bit stronger? Said Candle. “Something which could do the job at one blow, so to speak?”

“Of course,” said the pharmacist. “You have a prescription? Just sign here.”

“You must have a prescription to buy poison,” said the pharmacist. “It is not us, you understand, it is the law.”

“Excuse me,” said Candle, backing out. “I have an appointment.”

The pharmacist muttered to himself for a moment before scribbling in a big, black ledger, in medical hieroglyphics, of course.

Candle arrived home unnerved, harassed and short tempered, but he was considerably cheered when his wife informed him that poor Mark was terribly ill.

“What’s wrong with him?” he asked.

“I do not know,” she wailed. “I have a splitting headache, or I would go to him and see if I can help. Please, Abner, won’t you go to see him?”

“Beast,” cried his wife. “He is our friend. And there he lies dying. And poor Maggie – I mean Lulu – all alone.”

Lulu greeted him sobbing in a black (for mourning) negligee, and while he was comforting her on the couch the police came in. Mark Walker was dead. The doctor had diagnosed it as arsenic poisoning, and the police as murder.

Candle’s well-known hatred for his one-time friend, together with the testimony of a certain pawnbroker and a certain pharmacist, helped convict him. The tearful and damaging testimony of the two ex-chorus girls clinched it. He went to the electric chair, protesting his innocence.

Three months later two beautiful widows in black (for mourning) bathing suits were sunning themselves on the sands at Miami Beach.

“Maggie,” said Yvonne, “the money’s almost gone. I’m afraid the vacation is over.”

“Yes, Sally,” said Lulu sadly, and then, brightening, “how about those two magazine editors we met last week?”