'I'd rather be flying'


Flying was Harry’s great love (not counting Jeanette), as we learned in the posts on this blog on May 23 and 29, 2015. In those essays, he wrote about his fascination with the sky since childhood and his knowledge about clouds later on. (By the way, many decades ago, Harry wrote articles about clouds and more for encyclopedias, including Americana, Collier’s, and World Book. But it seems they are nowhere to be found.)

Below, Harry gives us a few more details about his flying days, as a young adult in the DC area and as a youth in Buffalo. I took this story from a casual email he wrote in 2009 to a teenager who was dear to him. At the end, you’ll see his encouraging words to her about writing things down -- aren’t we glad he took his own advice?


I tried playing golf for a while, but I was never very good at it, and I always had the feeling that I would rather by flying. When we first moved down to the Washington area from Buffalo [1949], I used to rent an airplane once in a while just to keep my skills sharp. There were half a dozen or more little airfields around Washington in those days. Sadly, almost all of them are gone now. The land became more valuable for real estate developments.

Anyway, I was working in the Pentagon for the Air Force and the Dept. of Defense, and the Air Force started a flying club, which I joined. Then they needed some instructors who could teach both the flight part of flying and the ground school subjects, like navigation (it’s no use flying if you don’t know how to get from one place to another, and it’s not the same as a road map with street names and route numbers) and meteorology for pilots (you better understand the weather and its effect on your airplane if you want to survive in the air) and other things that you have to know about airplanes if you want to fly them.

So, for some 30 years, I did a lot of flying and made some extra money that way, but mostly I got paid in flying time. For example, depending on which airplane you use, it could cost anywhere from about 15 bucks an hour to fly a two-seater plane, to about 35 bucks an hour for a four-seater, to 60 or 80 bucks an hour for a six-seater – the biggest one we had in the flying club. So if I wanted to take my family on a weekend jaunt that would require ten hours of flying time, that would cost about $350, so that would take care of my teaching time for two evenings and a Sunday in a week.

It was worth it to me because otherwise I couldn’t afford to do much flying. In fact, the only way I could do all the flying I wanted was because I got paid to fly. It’s the greatest hobby – much better than golf. Have you ever been in a light plane? It’s not at all the same as an airliner and certainly not the same as a jet plane. 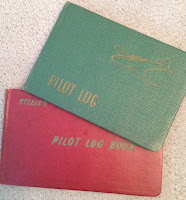 Discovering Harry's pilot logs brought back memories of our plane rides. Several times he flew me and friends over the sights in Washington, DC, and above our Greenbelt, MD, home so we could wave to the neighbors. (Not allowed anymore, of course.) He took several of his friends on farther excursions. Harry recorded these outings in the red log book, along with our family trip to Buffalo in 1957 ("Family vacation" entry in snapshot below). My brother and I will never forget that flight; I didn't feel so good up in the air, and we stopped overnight in Pittsburgh due to rain. In the green book, Harry recorded his flights from 1942 to '48, while still living in Buffalo. From 1947 to '58, he most often flew a Cessna, the plane we knew was his favorite.

Earlier in Buffalo
When I came home from the war – I had stayed on in Germany for a year and a half after the war ended in May 1945; I was hunting down Nazi war criminals wanted for crimes against humanity – so I came home in December 1946. I had done a little flying in the Army after the war, too, and I wanted more than anything to get a job with the airline, any airline. While I had my applications in at all the airlines, I taught flying at the Buffalo airport, which was just a little airfield at that time – not at all the huge place it is today. My break came through in June 1947 when I was hired to fly for Capital Airlines – a company which went out of business long ago. Two weeks later I was fired – or let go – because I had just passed my 26th birthday, and their policy was not to hire anyone 26 or older. So I continued working at the flying school at Buffalo airport.

I also did other things. Did you ever see the airplanes towing huge advertising banners along the lake shore at Crystal Beach? They do that at all the many beaches everywhere in the country. Well, I did that. I got paid pretty well for that. I also towed gliders into the sky at the gliding capital of the world which, at the time, was Elmira, NY.

Another thing I did was fly charter trips. In the summer, fishermen would hire our company to fly a plane equipped with pontoons to a lake in Canada just to go fishing. Canada has hundreds, maybe thousands of little lakes teeming with fish and accessible only from the air – that is, no roads so you can’t drive to most of them. In the winter when the lakes were frozen over, we had planes equipped with skis to land on the ice and the fishermen would chop a hole in the ice and sit there and freeze their fannies off and drink beer, while I sat in the plane and listened to the radio or wrote in my journal.

Things to write about
I know all this reminiscing is boring you, but it just illustrates to you that you can write and write and write about all kinds of inconsequential things and never run out of things to write about. And just because you haven’t been around as long as I, does not mean that you don’t have lots of things to write about and stories to tell. What’s your most embarrassing moment? What makes your heart swell with pride? What brings tears to your eyes? Do you cry at sentimental movies? Some people never shed a tear. Some sob out loud. I’m very sentimental and am easily moved to tears in sad movies.


Well, that last sentence is true for me, too -- do you think it's hereditary? Concerning Harry's piloting days, did you or a family member ever fly with him? Please tell us what you remember. (If you're not able to post a comment on the blog, feel free to send me an email and I'll post it for you.)