The first half hour was just chatter, so to speak, when the tape ran out, and then the Assistant Secretary said to me, if you’d like to say anything off-the-record, while the tape machine is not working, feel free. So … this may not be exactly verbatim, but this is pretty much what I said to them – and I have told this to very few people before. …

I told them I felt proud and privileged to be working for the Dept. of Defense, but that I was intensely and profoundly ashamed of the Navy for its action in dismissing these five people as security risks. The fact that they were all involved in organizing the residents of Greenbelt into a cooperative housing group to buy the community from the government should have alerted their investigators. The fact that the accusations of communist leanings or similar vague assertions all came from the same sources – people who were opposed to the sale of the community to residents – should have alerted them. The fact that all of the dismissed persons were Jewish should have given them pause and caused them to ask if there was some anti-Semitism involved – actually there was, but I considered it a minor thing, more of a coincidence than a causal factor. (But for the Navy, it had the appearance of anti-Semitism.) And finally, the Navy investigators had taken the accusations by the accusers, and the Navy Dept. had acted on them, without ever actually investigating and interviewing others in the community to confirm or refute the allegations.

They had branded the newspaper that I was the Editor of, as a communist rag without ever interviewing me and my associate editor as a communist fellow traveler, also without ever talking to me. And I was ashamed of the Navy for having caved in to the witch hunt that Sen. McCarthy was conducting, and I said flat out that anyone who considers my associate editor as a communist sympathizer or a security risk ought to have his head examined. Now the Navy is being subjected to public scrutiny because of the case I mentioned before – the guy who went public – and you need to find a way to back down without appearing to back down. The three guys who aren’t fighting it – that’s moot over with and gone – but these two, you ought to just clear them and let them get back to work. It’s my guess that if you reinstate them, they’ll resign gracefully and disappear from public view. After all, why would they want to continue to work for the Navy after this experience?

About then, the tape recorder guy said the tape is up and running again and the Assistant Secretary called the meeting to order again and said to me, we’re back on the record. Then they asked me a few more questions, touching on the things I had just unloaded on them but not in depth. My feeling was that it was all just a formality, that they had already made up their minds and were just going through the motions. Anyway, it took another year before they announced that the two guys had been cleared and reinstated in their jobs.

So, my associate editor, who was very grateful to me, told me that during that two-year period, he had had several jobs, selling shoes, selling cars, and finally, working for the Park and Planning Commission as an urban planner – and he thought when he was cleared and reinstated he would get all his back pay – two years’ worth. Not true. What he got was all his back pay minus what he had earned in other jobs during that time. It amounted to only a few thousand dollars, most of which went to the lawyer. Both guys, by the way, resigned two weeks after they were reinstated.

After I testified, Secretary Talbott called me in and asked how it went and I told him what I just told you – all I had said at the hearing. He told me that the whole subject of those security dismissals had come up at the weekly meeting of the Service Secretaries with the Secretary of Defense, several times, and he had personally told the Secretary of the Navy about me, that I worked for him and that he fully supported me.

Many, many years later, when Fritz Kramer was a Special Assistant to the Secretary of the Army, he told me that a Navy investigator had come to see him when he was still in Army Intelligence to ask about me and that he had let the guy know in no uncertain terms that the idea that I might be sympathetic to communism was ludicrous. And he asked me what that was all about, so I told him the whole story, too. Well, most of it. The whole story is much too complicated. I have tried to condense it here which necessarily leaves out a lot of pertinent information. It’s ironic, by the way, that Secretary Talbott had to resign under a cloud, so to speak. As I understand it, he had used his office as Secretary of the Air Force for some personal business. Still, I remember him with gratitude for his support when I needed it.

You can read more on this case and about Greenbelt history in “Greenbelt, Maryland, A Living Legacy of the New Deal” by Cathy D. Knepper. The book includes several quotes from Harry.

In 1949, the Zubkoff family of three left Buffalo and moved to an apartment near the "Center" in young Greenbelt. In 1953, the family of four moved close by to a row house at 17-H Ridge Rd., where we lived till 1963, when I was 11. I have an early memory of one night watching Harry and a few others working on the newspaper at the dining room table. Maybe they were discussing the outcome of the McCarthy case that had upset the whole community for the past year or more. 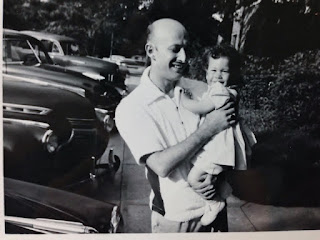 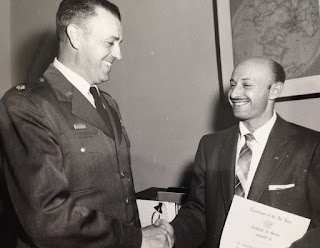 Despite the turbulence of the McCarthy case, and I'm guessing many more crises to come, Harry often claimed he "had the best job in the world" for 36 years at the Pentagon. Here are a few 1950s-era photos of Harry at work: getting an award; gathering with associates at an event (by the time I worked for the government, alcohol was not allowed on the premises); and posing with a group of young adults, possibly interns or the flying club he taught. 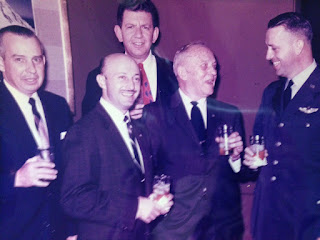 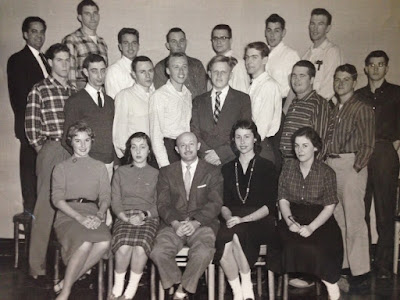 Posted by Harry and Elaine at 9:44 AM