I have memories from the 1990s of arriving at my parents’ house, and more times than not, finding my dad at the computer. Now I’m reading things he was probably working on when I interrupted.

In the previous post on this blog, Harry recalled his personal role in an airplane factory, as a young man in the early 1940s. This week he gives the broader story of aircraft production. He wrote this article for the Aerospace Industries Association in 1994.


The American aerospace industry came of age in World War II when it became the mainstay of America’s role as the great “arsenal of democracy.” Before the war, in September 1938, President Franklin D. Roosevelt recognized it as a national asset when he called for the production of 10,000 aircraft a year. In May 1940, FDR upped the ante, calling for an annual production rate of 50,000 aircraft. The war actually began on Sept. 1, 1939, with the destruction of the Polish Air Force by Germany’s Luftwaffe. The war for the U.S. also began with an air strike when the Japanese bombed Pearl Harbor on Dec. 7, 1941, a “day that will live in infamy.” No war would ever be fought again without first seeking control of the air. 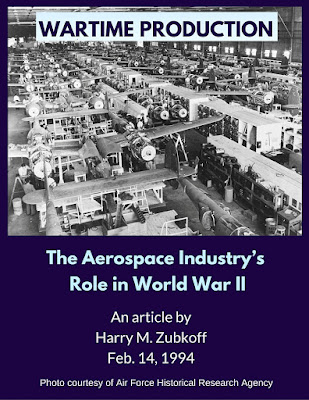 It was General “Hap” Arnold’s vision that made FDR’s unprecedented goal possible. He saw the aircraft companies as prime contractors for a vitalized industry, able to subcontract with smaller companies, including the automobile companies, for components and subassemblies. William S. Knudsen, appointed by FDR to chair the National Defense Advisory Committee, which was responsible for military production, put General Arnold’s vision to work. He organized licensing arrangements so that production could be shared among several manufacturers in order to produce aircraft at the fastest possible pace.

Governmental leaders may command, but it was up to the array of companies involved in the aerospace industry to respond and perform. They expanded at an unbelievable rate and the production of aircraft during the next few years represented an industrial miracle. Not to detract from the outstanding conduct of the war by our military services, World War II was a war of production, logistics and supplies. It was the genius of the aerospace industry, in many ways not generally known, that made the difference. Unlike the automobile industry, in which designs are frozen with only minor changes incorporated each year and major changes planned for a year or two in advance, aircraft production required a revolution in thinking. Design changes had to be constantly incorporated in the production program as wartime experience disclosed flaws and as the aeronautical engineers devised improvements. This innovative “flexible mass production” set a pattern for other industries.

In Knudsen’s words, the U.S. “smothered the enemy in an avalanche of production ...” All told, the aerospace industry produced more than 296,000 aircraft of all types. By the end of the war in 1945, we were flying 26 different types of airplanes, none of which had existed six years earlier. In fact, the aircraft available at the beginning of the war were already as obsolete as the antiques of World War I. The air war was conducted almost entirely by planes that were built during the war. Some 50 major prime contractors were involved in this phenomenal production record, employing more than a million workers, with another 300,000 employed by subcontractors and two million more on related equipment.

Progress in design and construction represented as great a miracle. Technology advanced with incredible speed, doubling and trebling the range and speed of fighters and bombers. The B-29, for example, was still on the drawing boards when the war began. The first production model was flown in July 1943. When the war ended two years later, more than 1,000 had been built in six new factories by four manufacturers.

By the end of the war, jet and rocket engines were bringing about another revolution in aerodynamics and airframe construction. Planes had to be built able to pass through the sound barrier and the thermal barrier. At the end of the 1940s, a whole new world of flight was taking place in the skies. The pace of change was so rapid that the plane that broke the sound barrier in 1947, the Bell X-1, was retired to the Smithsonian as an antique less than three years later.

During the Korean War in the 1950s, the Vietnam War in the 1960s and 1970s, and the Gulf War in the 1990s, with a few smaller military actions in between, the aerospace industry continued to provide the advanced weaponry of modern warfare, and much more besides. In fact, through the “Cold War” years, the aerospace industry was a major contributor to both the national security and the national economy, with aircraft sales overseas the largest single American export. American built aircraft filled the military and commercial fleets throughout the world. At the same time, the sciences of missilery and rocketry saw remarkable advances, as well as the techniques of development and construction as vehicles, engines, weapons and accessories became increasingly complex.

In the 1960s, in addition to meeting the demands of the Vietnam War, the genius of the aerospace industry, in collaboration with the government, started the U.S. on the space program that culminated with the landing on the moon in 1969. Today, the demand for ever more sophisticated equipment for military use, for more and better equipment for commercial fleets, and for the continuing conquest of space, signals the vigor of the aerospace industry and the importance of its contribution to the national well-being.

If planes interest you, check out the book Harry co-wrote in 1994:
Flights: American Aerospace ... Beginning to Future